After an immensely hectic last few weeks on the farm we were just about ready to leave our berth at Dover on Friday 19th April, 2013.  Many car loads of ‘stuff’ had been loaded on to – and off of – Joy in preparation. My Mum arrived at the dock along with Jez’s parents to wave us off and she had baked us a farewell cake to see us on our way. It was an emotional morning,  one of the hardest things I have ever done was leaving my precious Mum behind. 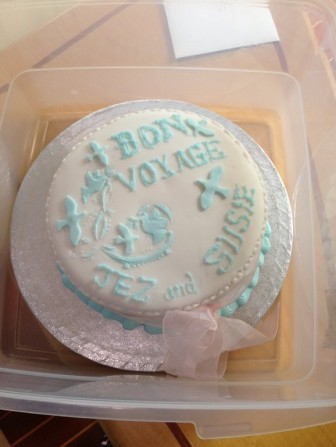 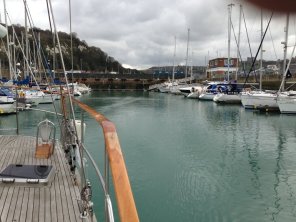 We arrived in Hamble the following Monday ready for Jez’s RYA Yachtmaster training in the Solent.  A big thanks to Ed Green who provided a week of very informative and entertaining training (we escaped without an indent of the winch handle on our foreheads as was frequently threatened!!) and after a night passage with the examiner, and further exercises the following day, Skipper was crowned ‘Yachtmaster Offshore’  Phew!!  We were both exhausted!   At this point I have to confess that the shoe box crammed full of chocolate bars given to me by my Mum to hide away as an emergency supply had actually reached its last lonely bar (ok, so I also have to admit that I had started it before we had even left!).

The following week we sailed into the River Itchen to Saxon Wharf (just north of Shamrock Quay where Joy was built) where Graham Collingwood fitted another winch.  We have also installed our Iridium satellite comms system, wifi bat, replaced cleats and replaced the fridge pump which gave up on us during last week (that’s the royal ‘we’ of course, I have spent all week winching Skipper + tools up the mizzen and main so many times I have muscles like a German shot putter). Another big thanks to all the guys at Saxon Wharf, lending us all sorts of tools and advice – this week and also last summer when Joy was out the water for a spell of TLC. 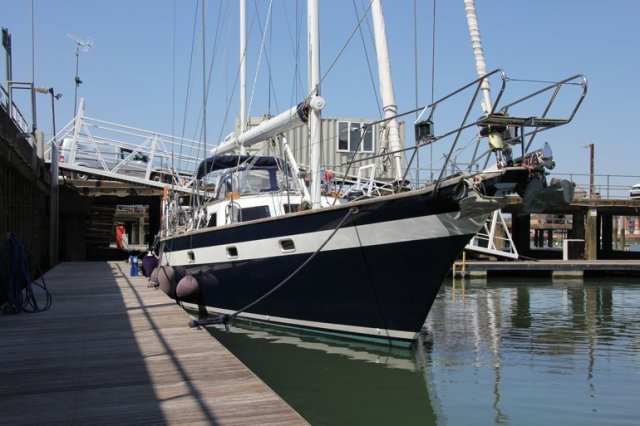 With marina fees of up to £100 per night in this area, we have saved money this week by anchoring off the Isle of Wight, we found a perfect spot to the West of Newtown Creek at Midnight on Wednesday, sheltered and quite close to the shore. Thursday saw a visit from three nice men in a rib, from the Border Patrol boat we had seen earlier making its way eastwards – we obviously looked dodgy. I was on deck sewing a curtain for the forward heads, Skipper had the boat apart inside running cables for the wifi system.  They were however satisfied with my explanation of what we were doing and what our mad plans were – and with a wave and a smile they sped off back to their mother ship.

We sailed today to Osborne Bay, East of Cowes, to tuck ourselves away from the forecast force 5-6 South Westerly – although the wind has dropped and it’s quite settled at the moment. The anchor dragging alarm works well – we have discovered that setting the correct radius for the amount of chain let out means less times getting up in the night to switch it off!!  Vodka of course also helps you sleep through it. What was that thing about steep learning curve?

We have had to hang around for our new sail which won’t be ready until Tuesday from Poole,  and then we plan to head across to Cherbourg before heading South.