We have had a fantastic 600 mile sail to the Canaries, arriving NE Lanzarote late Thursday afternoon after sailing for some 4 ½ days. With NE winds pretty much all the way, 20-25 knots at times, we enjoyed downwind sailing and we only had to motor for a few hours when the wind died completely on day 2 and as the weather report showed stronger winds further offshore we motored out until we picked up the wind again.  Trying every downwind combination we could think of, day 1 was asymmetric with main and mizzen, so that we could test out the snuffer – works a treat.   With a short 2m swell making sails flap a bit as we rolled around, we tried goosewinging with a poled out genoa and main on a preventer. This worked well, although we are unable to get the boom very far out due to our shrouds being in the way (and we have a rather saggy old main sail).  Next was twin head sails, the smaller inner gib poled out one side and the genoa poled out using the boom on the other side.  We kept the main and mizzen up for a while and as the wind picked up we got the main down and left the mizzen up as a steadier and found a very comfortable down wind combination, very easy on the helm too.  We averaged about 5.5 knots over the whole trip, but consistently achieved 7’s and 8’s when the wind was good.

We also tried out our towed generator to top up the batteries, we found it generated about 4 amps which is about a ¼ of our usage when all electronics are on and we are using the autohelm,  so this will help along with the solar panels to keep our beer cold!  We did have to keep a sharp look out for fishing buoys, as on our first night despite being some 40 miles off the Moroccan coast the prop of the generator hooked onto an unlit plastic can which then dragged fishing nets. We noticed our speed quickly reduce from 7 knots to 3 and shone the torch behind us to discover the generator hanging on by only one rope. We furled the genoa and depowered the main and mizzen, then attached a line to the generators rope so that we could haul the generator back to a winch and started winching the lot back on board. Then we heard a motor and shouting and a flash light was shone at us – no navigation lights at all. There was a tiny fishing boat out there with no lights other than a torch!   Our winching gained speed(!) as we took it in turns until the 30m rope came onboard to reveal the plastic can and nets hooked on the prop!  We cut them free, genoa came back out in a flash and off we sped away from some very angry, but unlit, fisherman! A good thing we are long keeled with skeg hung rudder as the outcome would have been two very angry sailors aiming more than a flash light at the fisherman!!

On day 3 we had a great dolphin display, they weren’t very big dolphins but they leapt clean out of the water in front of us as we sat on the bow seat, showed off their orange tinted bellies and then tail slapping against the water as they went back in. Great fun!

Our first sight of land was Roque del Este, a large rock off the NE tip of Lanzarote, and from there we sailed into a large bay near Arrieta where we dropped anchor for the night. There was not much swell to disturb our sleep, and a whole nights sleep was very welcome.  This eastern coastline is beautiful and the volcanic mountains are spectacular, we enjoyed our sail to the south of the Island anchoring on route under Castillo de San Jose near Arrecife then on to Rubicon where we took a berth to top up with fresh provisions.  The staff are very friendly and welcoming and the marina is very clean, they even have a swimming pool for berth holders, and there are lots of bars and restaurants to choose from.

We are, however, happiest when at anchor and one night attached to a pontoon was enough for us – our anchorage tonight on the south east tip of Lanzarote overlooks Fuerteventura and this is where we will head next. 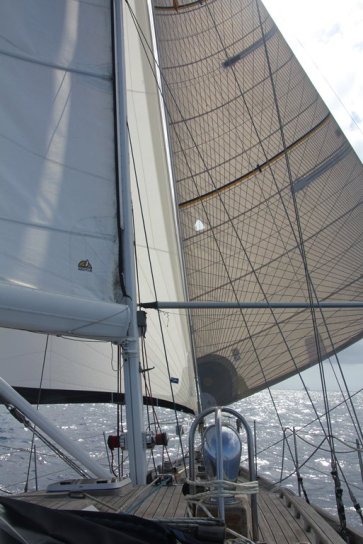 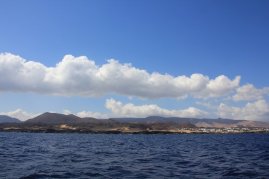 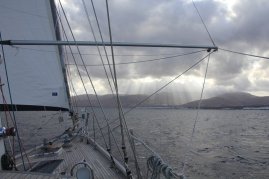 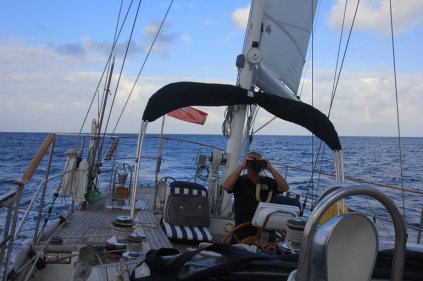 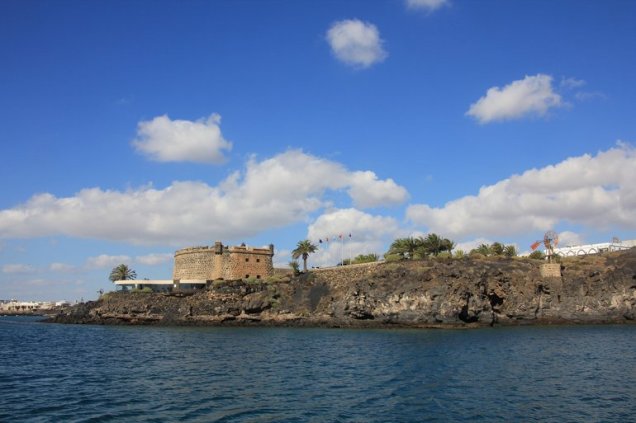