After another night of howling wind and squalls passing overhead, we set off from Round Island, Aves Sotavento 6am Tuesday 18th November knowing we had at least 30 hours of hard slog.  The wind was ok at 18-22 knots with the odd squall taking it over 30, that wasn’t a problem. The sea however was at its worst, and on the starboard tack we had large waves hitting us hard on the bow, knocking us back to 2 knots of speed. We would ride a huge wave and then our bow would slam heavily into the next as they came in quick succession.  As night fell we put in a tack between Aves Barlovento and Los Roques and the waves and current increased making even slower painful progress.  A huge cruise ship changed its course to overtake us, not feeling any of our pain as it slipped effortlessly through the conditions. As light came we could see the island of Grande Roques, where the main town is, in the distance as we put in our last tack towards it, fishing boats bashing through the swell came past us heading out to sea.  We motor sailed the last couple of miles just to get in, as squall after squall gave us all that mother nature had to give.

Anchor dropped, on the west side of the village to avoid the planes landing at the small airport by the beach, we sighed with relief and looked around Joy for damage. The galley was a complete disaster zone, we had tried to cook a meal (fish again of course) in the evening and neither of us could eat much so there were leftovers on the stove. A crashing wave had launched this along with the kettle off the gimbled stove onto the floor. We had rice, fish and water everywhere. As well as redecorating the galley, it had even made its way under the cooker and also into our cabin.  Cleaning up in bad conditions was pretty impossible, so now it was time to get everything back in its place before we head ashore to visit the authorities.

There are no docks on the island, so we beached the dinghy and were very pleasantly surprised to find a lovely village with sandy paths meandering through the colourfully painted buildings. No vehicles on the streets, just bicycles and lots of friendly, well-looked after dogs. We first had to get some local currency on the black market, most people either go to the pharmacy or a bar for this, we couldn’t find the pharmacy so we slipped into a small bar and found the owner spoke perfect English so the deal was done.  Bolivars in pocket, we headed for the Immigration office and were directed into an office full of people not actually doing any work, either swinging about in their chairs or busy texting, and no-one spoke English.  Luckily the officer had google translate on his phone, he didn’t bring us good news as the phone told us we would be fined for not having the correct ‘next port’ stated on our clearance papers from Bonaire. This has never mattered in any other country, so we were a little shocked to be told  that we could only have a transit clearance of 3 days or pay a fine in cash of 8,000 bolivars (about US$95) to be allowed the usual 15 days. He asked us if we had dollars so  we told him we already had a small amount of bolivars and he got very jumpy, he and his colleague kept repeating ‘where’, ‘where’ – wanting to know where we had exchanged them.  We now thought we were in deep trouble, so we kept insisting we did not understand the question!  After 10 minutes or so of heated exchange some of which went via his phone, he gave up and then tapped into his phone that we should have gone to him for the bolivars!  So all along he wanted to do the illegal money deal!  When we said we couldn’t afford it he said we only have 3 days, so we gave in and returned to the boat to get some more dollars to give him.  Back ashore he made a phone call for the money, and then tippexed out our ‘next port’, wrote Los Roques over it and photocopied it, then destroyed the original!  I could have done that had I known.  The 8,000 bolivars were handed over and he put them in his back pocket and stamped our papers, the Costagarda was also in the office at the time so he stamped his part (we assumed they were splitting the ‘fine’) and then we were directed to the National Park payment office located in a trailer nearby to pay our park fees of 3,500 bolivars.  Next stop was the National Guards headquarters for another stamp and the final and fifth authority needed to stamp our clearance papers, the Inparque office who run the national park, were closed so we returned the next day.  The most long-winded, confusing & expensive check-in we have encountered.

Fully legal in Venezuelan territory, and determined to now enjoy it, we set off on a walk up to the top of the hill that overlooks the village.  I had watched a group of walkers from the boat the day before walking a bouncy black dog up the hill, so we looked for the same track.  There are natural lagoons behind the village at the base of the hills, so we looked for a way across what looked like a flooded football pitch,  and came across a black dog with a yellow collar eager to show us the way.  We followed, and as she bounded along the track chasing lizards we realised this must have been the same dog that I saw yesterday, only it wasn’t being walked by its owners, she goes with anyone who wants to climb the hill.  She was great company, running ahead then waiting for us, pouncing like a cat on unsuspecting lizards (a very sad moment when she actually caught one and then didn’t quite know what to do with it except run around with it struggling in her mouth), then coming back to us for a pat and more encouragement.  It seems it really doesn’t matter what language you speak, “go get ‘em” and “see ‘em off” is fully understood in the Spanish canine world.  Panoramic views from the top of the hill were well worth the dusty climb, and our new amigo collapsed in the shade of the derelict look-out tower.  This area is spectacular, Grande Roques is an incredible mixture of rock, sand, lagoons and reef (oh, and did I mention the huge mosquitos?).  We are so glad to have got here, it was worth the awful sailing conditions and check-in procedure. 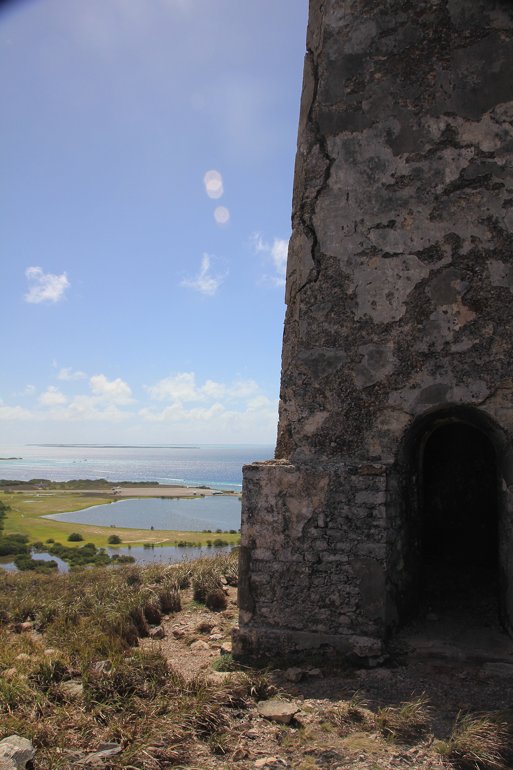 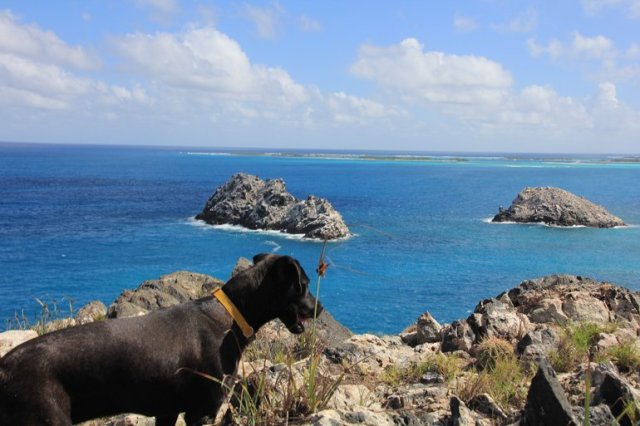 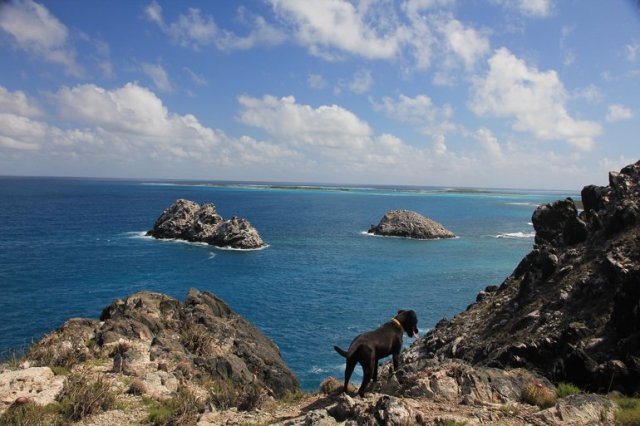 We had a very nice lunch at the same bar that we had exchanged our money the day before, and bumped into a couple we had met on Bonaire briefly, Bruno and Sue. They had arrived a few days before us and had also been ‘fined’ as their papers said their next port was Grenada. Bruno speaks fluent Spanish, but his fine was US$200 and he too had already exchanged his money before going to check in. This time it was the Costagarda who interrogated him on where he had changed his money, he also thought he was in trouble until the officer said next time he must go to him. We were relieved in a way that it wasn’t just us who had been stung, we had thought that our lack of Spanish had played a part, having heard of so many other cruisers coming here and having no problems whatsoever, but it seems vital that you come to Los Roques with it clearly stated on your last port clearance. 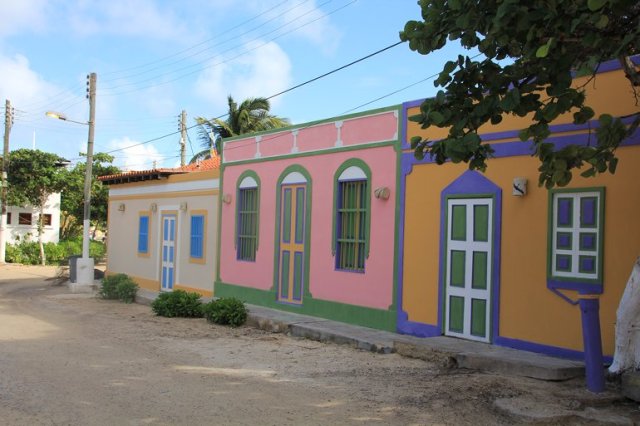 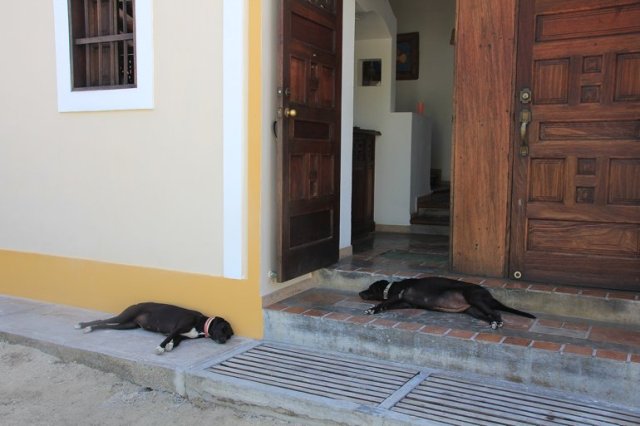 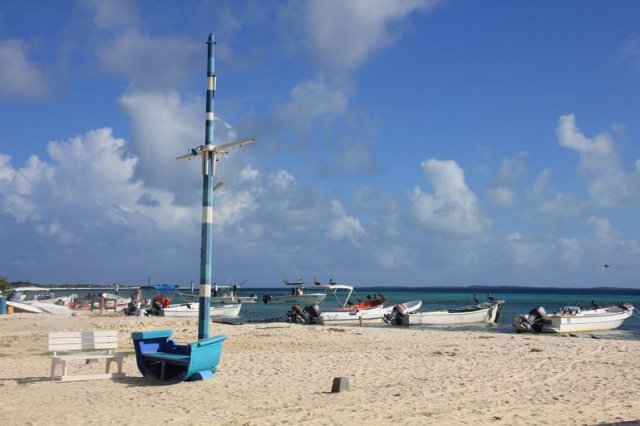 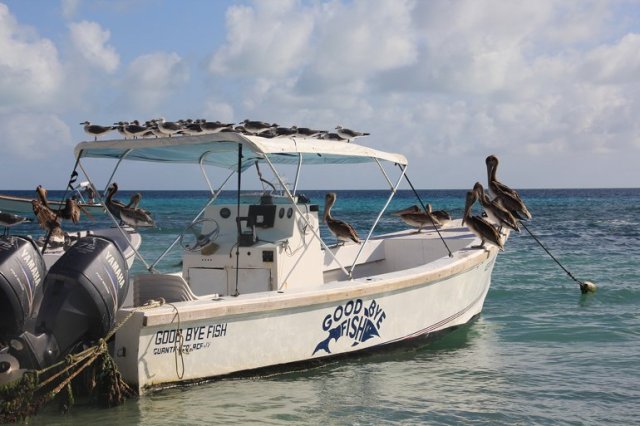