Our hydraulic motors finally came back (5 days turned into nearly 4 weeks) with new seals and a rather poor paint job.  We hadn’t asked for them to be painted, just seals replaced, and when we arrived to collect them Jez commented that it was rather kind of them to give them a lick of paint.  ‘All part of the service’ came the reply.  A bus ride home and back on board, we discovered that most of the paint had not made the journey.  On scrutinising the bill we found that the lick of paint, materials and labour, had been charged to us.  At US$85 an hour we were rather cross as we could have done a much better job for nothing.  Anyway, we were glad to get them back and refitted, tested and working….but after lifting one of our anchors just before leaving we discovered that they were both still leaking!  So we will have to return after we have met family in the BVI’s as we have run out of time.

The weather in the last couple of weeks of February became rather strange, with two complete wind reversals making the beautiful calm Brewers Bay rather uncomfortable for a couple of days.  It didn’t stop Polly the Pelican spending some time on the bow although she did have rather a job balancing.

The same day we had a visit from three dolphins, one was a little baby being shown around by its mother.  They came right up to the boat and surfaced by the steps making me jump. 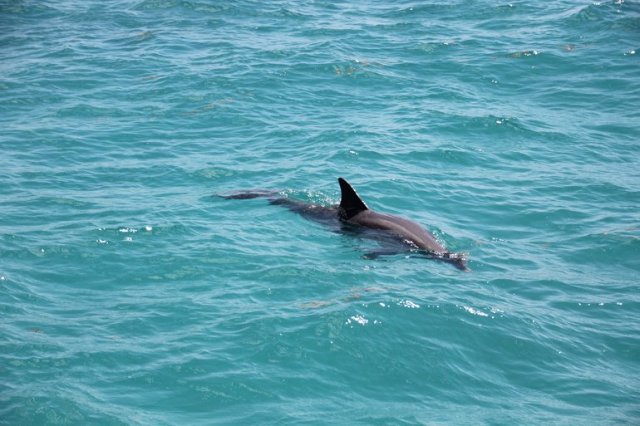 Then the rain came, it started at 5pm and continued until late morning the following day.  When we woke, the crystal clear water had become a mud bath with all the run off from the land.  The airport recorded 8.6 inches in 5 hours.  When we went ashore, a huge section of the sandy beach had been washed away leaving a deep hole!

After a full day of cleaning Joys bottom, by snorkel and two dive tanks, we were ready to head off to the BVI’s to meet family for a few weeks. She had grown a rather untidy beard, home to zillions of tiny critters including baby lobsters and crabs. As we prepared the boat that evening to leave next morning,  I spotted a large bird heading our way, I rushed up into the cockpit with the binoculars but it had gone. I couldn’t understand where, looking all around it was nowhere in sight, then I looked up and there it was.  Sitting on the top of our mizzen mast was an Osprey!  He kept looking down at us almost asking for a titbit, unfortunately for him we were clean out of tinned sardines.  We walked around the deck taking photos and he just watched us, quite confident and totally unafraid.  He stayed until after dark, we heard him chattering away whilst we were playing dominoes and then suddenly he disappeared into the blackness.  Joy really does pull the birds!