We hired a jeep last week for an Island tour, having arranged for us to collect it from the Blue Horizon resort near Esperanza we discovered after over an hours walk that the car wasn’t there after all. It was at their base in the town on the north of Vieques, so after complimentary iced water they very kindly gave us a lift.  Whilst at their beautiful airy bar overlooking the ocean we glanced over the bar menu, $12 for most spirits, I quickly shuffled my grubby bag out of sight and brushed off the sand still attached to my toes from the beach walk.

Vieques is 22 miles long and about 4 miles at its widest point.  Both the west and east ends are now uninhabited and managed by the US Fisheries as nature reserves, once occupied by the US Navy from the early 1940’s up until 2001.  The Navy used the west end to store their ammunitions in huge bunkers in the hills, and the east end was used as a training base with live ammunition practice, with the population being relocated to the middle section of the island.  The mile long breakwater on the north coast was intended to provide an area joining nearby Puerto Rico to shelter not only the American fleet but also for the British fleet in the event of defeat in World War II.

The breakwater now has a tarmacked road down the middle so we drove out to the end, choppy windy conditions on the eastern side, flat calm still waters on the west. It is now apparently a good dive and snorkel site with plenty of turtles about. 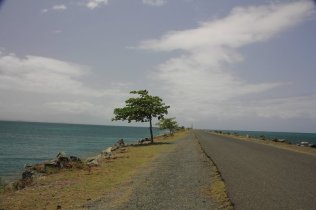 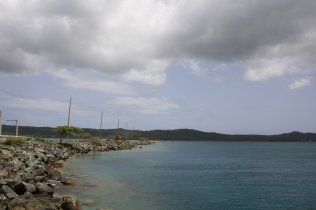 This is the islands 375 year old Ceiba tree, its roots are so huge it’s like sheltering behind a huge wall of tree. 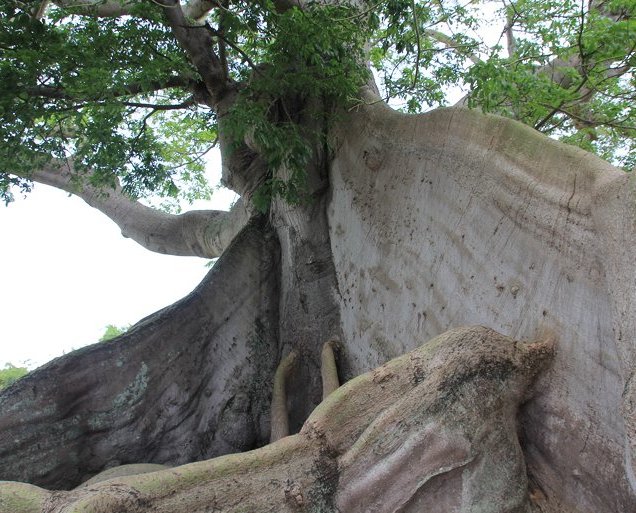 There are hundreds of semi-wild horses roaming freely all over the island, even in the town of Isabel Segonda we saw one just trotting down the main road oblivious to vehicles and people.  Most are in reasonable condition despite the arid land and lack of grass. Apparently a large number have owners, we noticed a few that had been branded, they just let them roam free as it’s cheaper and less work for them.

The west end wildlife refuge has an unmade track running through it to Punta Arena where the sugar cane was once shipped out and then a network of tracks lead off to different beaches. 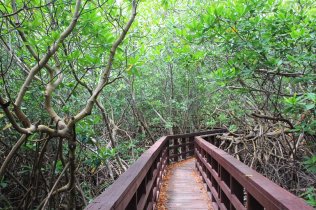 On a hunt for the old navy bunkers, we went off the beaten track and entered the rabbit-run network of very narrow overgrown roads in the western hills. We found the bunkers eventually, all overgrown and derelict and many dozens of them spread about the hills.  After half an hour of edging our way through brambles we gave up on trying to find a way out, so turned back and made our way back out to the main road.

The eastern end of Vieques is equally as beautiful, a gated entrance to the other wildlife refuge leads to another unmade road which winds along the southern shore.  Plenty more horses and the odd mongoose too, this one dilly dallied on the verge side so I could finally get a photo.

Tracks lead off once again to all the beautiful beaches, each one has dedicated parking spots with litter bins, some even have sun shade areas.  It really looks very well managed and maintained.  The road ends at a weed stricken beach called La Plata and from here the land north and east is all ‘no access’ to the public.  A huge area of about a quarter of the island is off limits due to the risk of unexploded munitions left over from the Navy occupation.   From La Plata we could see across Ensenada Honda, a huge bay protected by reef which lies on the edge of the restricted area so it is very remote.  This will be our next anchorage.

After a day of exploring we returned to Joy to get ready for our evening’s entertainment, kayaking across the bioluminescent bay, Puerto Mosquito.  We took the jeep down the dusty dark track to the water’s edge, the moon had just come up so we had a small amount of light to see our way in.   This is a remote bay spanning 160 acres with no noise or light pollution, so it was rather eerie paddling into the dark. The microscopic organism providing the light show is Pyrodinium Bahamense, a one-celled plankton measuring 1/500th of an inch. It has two tails which assists its movement in the water and their bodies contain chlorophyll, producing food by photosynthesis.  These tiny organisms create light when they are touched, each one glowing for a 1/10th of a second, believed to be its form of defence. This bay has a high concentration of them, apparently having perfect conditions for them to thrive; dense mangroves, warm water and a narrow entrance out to sea means that water circulation is very slow.  As we got further away from the shore the lights in the water became brighter, every stroke of the paddle lit up the disturbed water with sparks of fluorescent blue.  The rippled water against the bow also sparked, and then the fish lit up as they darted away from us mad nocturnal paddlers.  They looked like blue toxic missiles shooting under water in all directions, it was quite freaky!  Across the bay and back was enough for us, and with shoulders aching we deflated the kayak, fought off the mosquitos and moths and off-roaded back to the beach where we had left the dinghy.

The following day before we handed the jeep back we did some shopping at the larger supermarket in Isabel Segonda, I was surprised to find a very well stocked store with prices cheaper than on the mainland.  Fresh meat for a change!  We also stumbled across the Friday fruit and veg market, with a great selection to choose from and all in good condition, another change!  It was great to find some mixed salad leaves and herbs, a wonderful alternative to the tasteless iceberg. Now with a good supply of provisions we can sail to the remote anchorage at Ensenada Honda for a few days.