Cracking on in Curacao

In the last couple of weeks there has been a frenzy of activity on Joy, well frenzy in a Caribbean kinda style anyway.  The dorade vent boxes were taken back to bare wood and revarnished, and the name plate and hand rail have also been spruced up with fresh varnish. I have made some shading panels for the cockpit that zip to the existing bimini cover, and patched and repaired the spray hood which had started to come apart where stitching had disintegrated in the harsh Caribbean sun.  I also re-modelled my bean bag seat, adding a foam cushion instead of beans as it wasn’t comfortable (cheap K-Mart beans), it’s now like a really comfy armchair.

Things are supposed to happen in three’s, we have both lost toenails from old stubbing injuries, a regular occurrence when prancing around the deck in bare feet in a rolly sea. Then I caught my third cold of the year, always seems to happen after a bus ride. So we were a bit annoyed when number 4 popped up, our Victron inverter charger died.   It just stopped working, we had it fitted new in 2012 so it’s a little early for forking out 1400 euros for a new one.  We hunted high and low for a replacement in all the chandleries, a third pricier at least than ordering direct from Europe (and that includes the shipping) and the ones here for 240v are modified sine wave (stay with me here) instead of pure sine – basically for us that would mean not being able to charge our battery drills, or the toothbrush for that matter,  and could cause lines across the TV screen, nope.   Both the islands agents for Victron had long since left for pastures new, and after a fair bit of googling I managed to find a local company who supply and fix electrical things, usually on ships and boats much bigger than ours.  They were very helpful and asked us to bring it in to their workshop in Willemstad as they might be able to change the circuit board.  In the mid-day sun we set off walking to the bus stop. Co-incidentally we met two mad dogs on the way, barking at us as we approached them along the road side. I chose not to make eye contact and ignore them, they ran past then came up behind us and I suddenly felt something sharp scratch the back of my leg and the sound of teeth snapping!  Jez launched into alpha male and showed them who was boss and they ran off with tails between their legs.

The inverter was a heavy thing to be carrying too far, after a long wait at the bus stop a Venezuelan girl pulled up and offered us a lift – for $10.  We refused her kind offer and she immediately halved her price to $5. I explained that I only had the bus fair, 5 guilders which is less than $3. She said never mind get in anyway!  She spoke very little English, but enough to explain on the way into town that she had left Venezuela a year ago as the political and financial situation had got very bad and many people were fleeing.  We were extremely grateful to her as Jez would not have made it very far with the inverter in his backpack, and she shook our hands and bid us farewell after offering a return journey, which we declined as we had a few stops to make on the way back.  After dropping off the inverter our luck continued to improve, we stopped at a local bar for a couple of drinks which came to a rather steep 9 guilders, after handing over a 25 guilder note she gave back 26 guilders change in coins!  We didn’t realise until we had finished our drinks and were walking away…honest!

Over a week later we have a quote to fix the unit which is less than half of a new replacement, so they should get the part next week and we will have it back a day or two later.  In the meantime we cannot use any 240v appliance or tool without running the generator, a real pain as not only does it heat the boat up but uses diesel and we have got rather used to our solar powering everything we need.  With a lack of TV to watch movies we have kept ourselves entertained in the evenings with mammoth domino games and some ruthless back-gammon, fuelled by a rather delicious Curacao rum.

With a severe lack of air coming into the saloon in the 34 degree heat, we decided to turn the hatch around to open forward rather than back, allowing air to come in instead of going out.  It does mean we have to drill some fresh holes as of course they would have to be different the other way around, and we don’t have the correct size tap and die to do this (another thing to hunt high and low for on the island) so for now its taped in place. Already it has made a huge difference to the temperature in the saloon with a wonderful cooling breeze wafting through. Although it does occasionally knock over dominos in a gust, and it actually blew the lettuce off my plate one evening!! Glorious!

Apart from the inverter mishap everything else is going to plan.  Jez is re-sighting pumps and pipes in the engine room ready for installing our new fridge and freezer, they arrived from Italy this week and we hope to pick them up early next week when customs have released them.  We ripped out our old water heater whilst we were in Vieques as it was leaking, it took up a huge area in the engine room and we really didn’t need 120 litres of hot water anyway!  So we ordered another from the UK which came last week, a 30 litre compact and more efficient heater.  We have also taken the opportunity to clean and repaint the bilges before we put things back in.

I have also started to repaint the masts, well to pixie height anyway, as the painted aluminium has bubbled around fittings so it was time they were sorted.  The bottom section of the mizzen mast is almost complete, one more top coat then we can put fittings back and start on the next section up.  Whilst I worked on the mast Jez cleaned Joy’s bottom, it was so bad after only 3 weeks anchored here that he had to use 2 dive tanks to complete the job. Even our chain had 3 inch weed growth on it!  He got covered in thousands of tiny shrimp and some other weird looking scorpion-like creature which we think were the culprits for his many stings all over his neck , arms and legs. He needed a good hose down when he got back on board as he was literally a mass of crawling critters.

With all our improvement and alterations, Joy will soon be like Triggers broom (I’ve had this broom for 20 years, it’s had 5 new handles and 3 new heads)…. 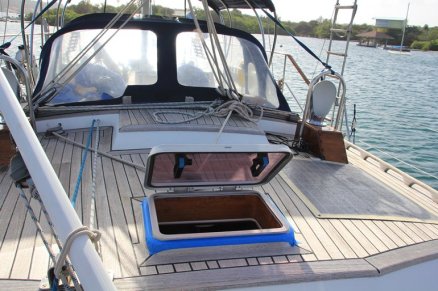 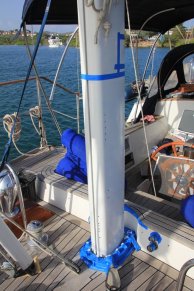