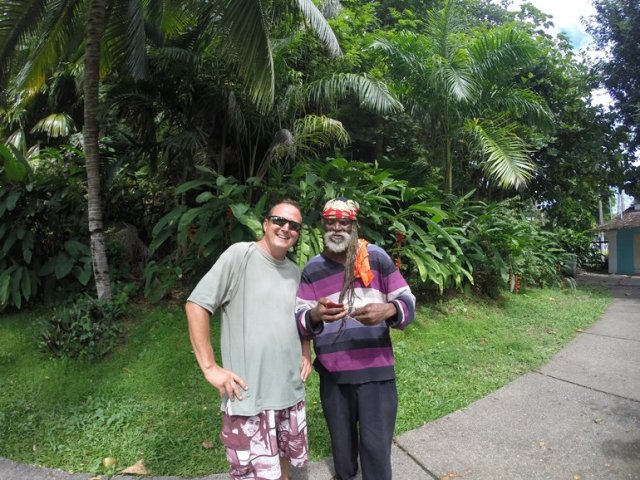 To say the town of Port Antonio is lively is an understatement. Bustling with people and cars, music pumping and car horns beeping, the smell of jerk chicken wafting lightly in the air and lazy dogs asleep on the petrol station forecourt and roundabouts, totally oblivious to all.   We queued in the afternoon heat at the ATM to draw out some local currency, and just as my mind wandered to the safety issue of having cash on me a guard strolled past with a pump action shotgun hugging his chest. I can’t see anyone pushing their luck around here.  We felt flush with 17,000 Jamaican dollars dispensed – that’s about £100.

Aside from all the noise, the moorings in West bay are very sheltered with barely a ripple on the water. The small Errol Flynn marina manage the mooring field, apparently anchoring is no longer allowed in the bay, and charge US$15 a night including garbage disposal. This also includes the use of their dinghy dock and all facilities including a small swimming pool. The marina is very peaceful and well manicured, full of flowering shrubs attracting large numbers of huge butterflies. 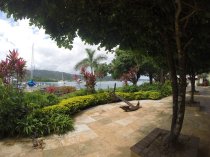 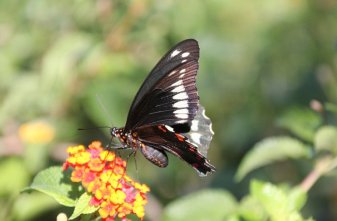 The daily market in town has a great choice of fresh produce as well as clothing and shoes, a rat run of stallholders booths means finding your way around is a little disorientating but the people are all very friendly and eager to help.  Only a couple of people have begged for money, most just want to sell you something or take you on a tour. Yesterday we bought some mangoes from a gentleman called Clive who lives in the mangroves behind us with his many dogs, he has built himself a raft with a small seat on top and paddles to and fro with a bamboo pole.  He picked us half a dozen mangoes for 500 JMD and then asked for a cold beer, he lucked out as we were beer-less and still needed to go shopping that day.

The school children are all smartly dressed in uniforms, and have no fear in coming up to us for a chat – one young lad had been dared by his friends to come over and after a discussion about which school he went to and what was his favourite subject, he demanded 100 Jamaican dollars (58p)! And I thought he was just being friendly.  Here, though, everyone wants to be your ‘friend’.

The town school is on the site of the old fort on the peninsular between the east and west bays, it looked well maintained and had wonderful views.

We had reserved a rental car from a small agency in town for 9am this morning but when we arrived at the office we found out that, in true Caribbean laid-back style, it wouldn’t be ready until after lunch. So we postponed it until tomorrow morning as we really want two full days to explore. After a stroll through town and around the grounds of the marina we added a few more friends along the way. ‘Moses’ wanted to take us on a mountain tour for US$60 each, he was part of the spiritual Rasta movement and was a desecendant of the African slaves that had escaped to the mountains when the English invaded the Spanish, they were known as the ‘Winward Maroons’. He had been up since 4am herding his goats to fresher ground in the mountains. Red-eyed ‘Capt’n George’ was determined to persuade us we needed a three hour raft ride down the nearby Rio Grande. Gracefully declining, we retreated back to Joy to listen to our old-school reggae CD that ‘Young Zacharria’ had apparently recorded especially for us. Rather glad we knocked him down from 2,000JMD to 400!