We arrived safely into the large harbour at Santiago de Cuba after a slow 24 hour sail from Jamaica, the entrance channel is well marked and after passing the island of Cayo Granma just inside the entrance we were instructed to anchor on the farthest side of the bay away from the marina until we had the quarantine doctors approval. She was swiftly on board and after inspecting us and our fridge and freezer contents we were allowed to dock at the marina ready for the other officials to board. Immigration and Port Captain were next, both completing identical forms, but after a long wait for customs we were told that they wouldn’t be bothering with us. Most people get a full search complete with sniffer dog, but two other boats had arrived before us and I think they were done for the day.

Moving off the dock we dropped the anchor just inside the channel markers next to the marina, the views of the surrounding countryside are stunning – if you can ignore the smoke churning towers of the city power station in the distance. The marina is on a small peninsular called Punta Gorda, so a 15km drive or half hour ferry ride from the city further upstream. Arriving boats are not allowed to explore the area, dinghies can only be used to and from the dinghy dock at the marina, rules are very strict here. We cannot go ashore anywhere inhabited in Cuba unless it is at a marina, rather restricting when there are so few marinas on the huge island.

There are two currencies here, the CUC for the tourists and local pesos which we can use also, 25 pesos to one CUC which is about 90p. So we were warned to be careful what currency we were being charged and examine our change as in the markets you can pay in CUC but get local pesos in change. The city is a little run down but the people are friendly, although the numerous touts and beggars can be rather tiresome. The cathedral and town squares are immaculate though.

The streets are noisy with lots of people and cars, lorries, buses and motorcycles churning out fuel emissions in high enough quantities to easily remove nasal hair. 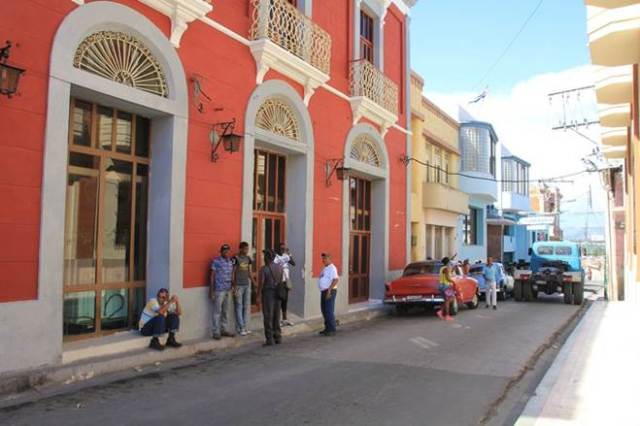 The food stores have very little variety in them, we were pleased that we had already stocked up with most things. The fresh produce market was adequate to find onions, garlic, cabbage, tomatoes and beetroot, but although there are many stallholders they all have the same small variety. A pound of tomatoes cost 4 local pesos, which is about 15pence! Our taxi driver Roberto took us back to the marina in his 1953 Chevrolet, he was very friendly and spoke perfect English as do a lot of people here.

From the marina we caught the local ferry across to the next punta and walked the last couple of miles up the hill to the castle, Castillo del Morro. The castle is also immaculate, we arrived early enough to avoid the 5 coach loads of tourists that turned up as we were leaving. Fabulous views of the east coast and back into the harbour. Then another ferry hop over the Cayo Granma, a quaint little island with some beautiful houses. 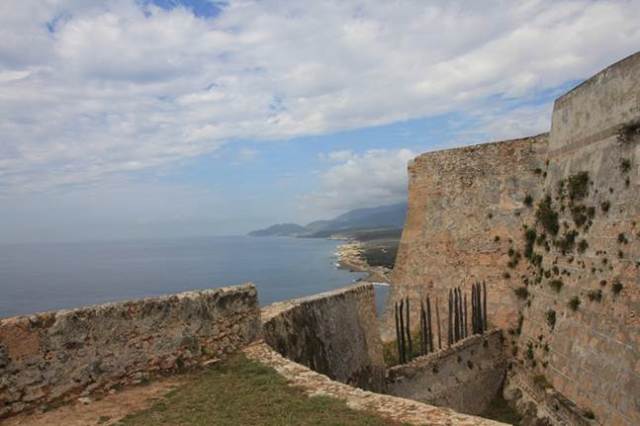 Tonight we are leaving to sail around the east and south coasts making our way to Cienfuegos in about three weeks. Our next anchorage is 75 miles away so we are hoping to arrive in good light tomorrow. From then it’s day hops along the miles of uninhabited cays until our deadline at the end of March when our visas expire. I will post some more pictures when we find an internet connection in Cienfuegos.