We prepared to leave Providencia with mixed emotions, it’s always exciting moving on but sad to leave such a beautiful relaxed place and leave behind new friends, both human and canine. Shortly before we left, Paul and Becky who live on the island came to Joy for the evening for drinks and nibbles, and of course more recipe-exchanging, it was great to spend some more time with such lovely like-minded people. We have gained a few new dishes including bonito fish balls which we made as larger fish cakes, delicious. 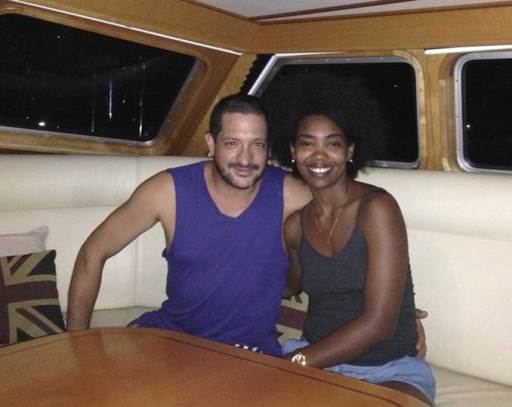 After clearing out with the maritime agent, Mr Bush, on Saturday we sat in the ‘plaza’ square by the main dock (having our very last deep fried Providencian potato) and said our goodbyes to our furry companions Lucky and Bob. I am sure going to miss Lucky and the wonderful cuddles, and poor Bob is now very frail with an ear infection making him very wobbly. I am sure he will miss the attention, the eye cleaning sessions (poor thing lets me clean the conjunctivitis from his eyes!) and of course the biscuits too.

Our expected two day sail turned into three days as the 10-15 forecast wind dropped below 10 knots during the first night, and then 5-8 knots during day two when we also hit the east going current which at times was as much as 2 knots against, reducing our speed over ground to a very painful 2 knots with rather slappy sails. Poling out the asymmetric sail using our main boom helped, although the rolling swell occasionally took what little wind we had out of the sail. We persevered however, determined not to motor until we arrived as we have developed an engine vibration as the mounts need replacing (one of the reasons for arriving in Panama this week as the new mounts are on their way from the UK). So we took the time to enjoy the tranquillity of low-speed sailing in glorious sun by day and under a blanket of stars and planets by night. We were going so slow that a tanker approaching from behind on his way to Colon radioed to ask our intentions as he thought we were drifting. Every evening brought tiny Martins seeking a perch for the night just as the sun set. They take a while finding the perfect spot, trying out all options before finally settling down. They didn’t seem to mind human company, flying into the cockpit several times and landing on the winches and ropes for a while as the light faded. On the last night we had one that just would not settle, and as darkness fell he flew into the cockpit over my head and straight down the companionway into the saloon. I called to Jez (in the galley making fish cakes with a small bonito we had caught) and he managed to coax the little fellow back out, he flew straight over to me at the helm and sat on my hand as I steered the boat! Those delicate little feet just perched on me for a while as I stayed on course before he decided maybe that was a little too close for comfort. As the sun rose the following day I found him perched on a solar panel quite happy. 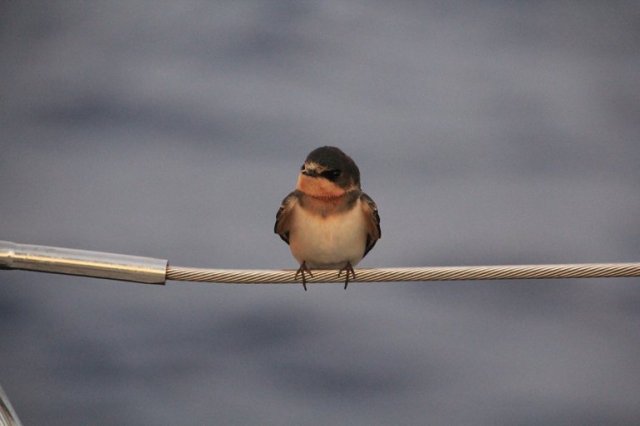 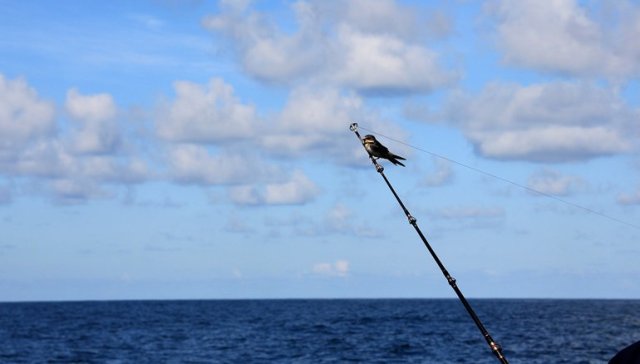 First light on day three also brought the stunning Panama coastline into view, with clouds covering the mountain tops close to Colon. We gybed for the last time towards Puerto Lindo, our destination, and at 8 miles to go we lost the wind completely and staggered to a halt. Sails down and motor on. The sea seemed alive with action, lots of splashing as some large fish were feeding and terns swooped down in a frenzy trying to catch the spoils. I was just taking a photo of a martin happily sitting on the fishing rod (above) as we trawled our lure when suddenly the fishing reel screamed, it was ‘bird off’ and ‘fish on’! A fat tuna had mistaken our lure for a flying fish, as Jez wound the brake on full he was still running away with the line but luckily he tired before the end of the line (the tuna that is, not Jez) and slowly we wound him back in, with the engine in neutral to reduce the drag we eventually got him in the net and landed him on the aft deck. He was about the maximum size that our gear can handle, I was rather glad I had repaired all the holes in our tired net just two days before. 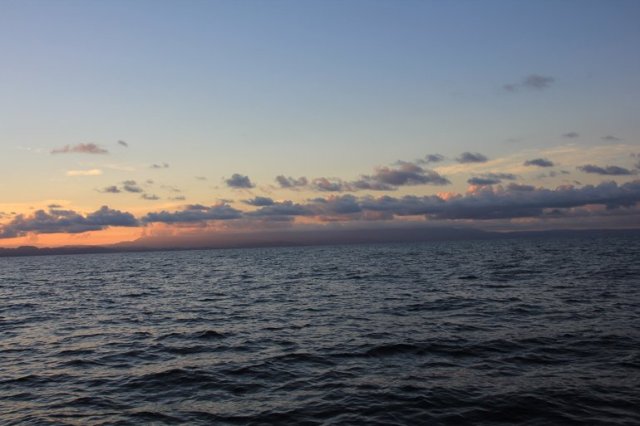 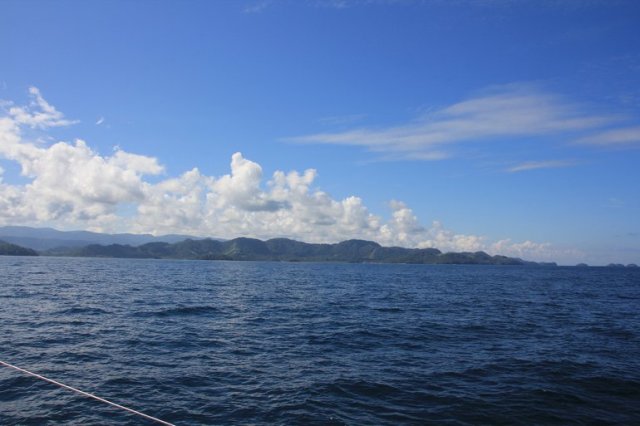 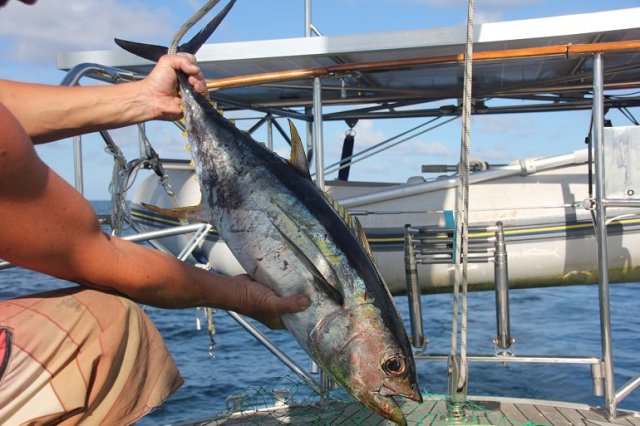 We quickly resumed our course and prepped fifteen meals for two ready for the freezer just in time for arriving at the entrance of the channel into the bay, escorted by half a dozen dolphins riding our bow wave. Once into the bay the anchorage is tucked in between the mainland and Isla Linton, and as we rounded the corner of the island numerous sailing boats came in to view. It is a very busy anchorage with cruisers and residents, and a small marina on the other side of the passage between the island and the mainland. Surprisingly busy here considering the gentle swell wrapping around the island making boats roll when the fluky wind turns them side on to it. Nevertheless we found a suitable spot for Joy in 12 metres of water in front of a small reef extending out from the lush green mainland. The sounds of the jungle filled the air with numerous birds squawking, fish jumping out the water and pelicans dive bombing for their breakfast. 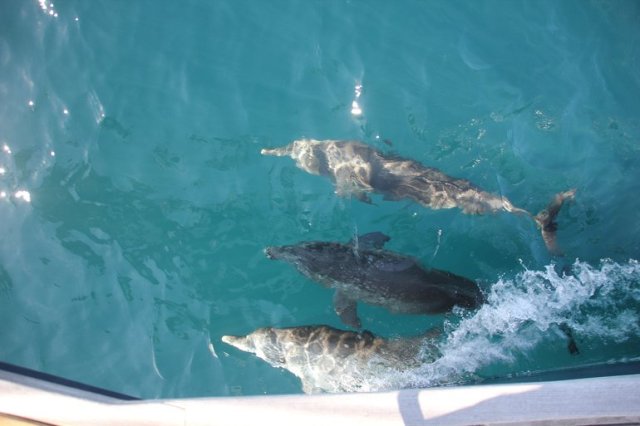 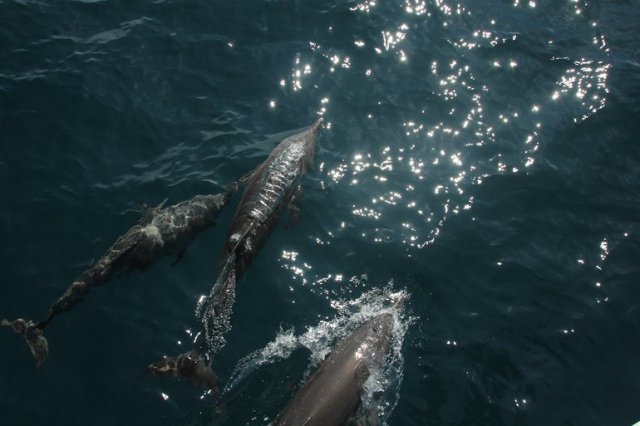 It was a nice surprise to see friends Iris and Martin on Catamaran ‘Kalea’ come out of the marina and anchor close by, they were very kind to lend us some dollars so that we could clear in with customs at the marina and obtain our cruising permit. We paid USD185 for our cruising permit plus another $15 – for what we were not sure as the officer did not speak English and it was not on the receipt, just written on a post-it note! Immigration is in the small town of Portobello a few miles away, and we had missed the last bus at 12.30. The following day was a national holiday with all official offices closed so we had to get a taxi to get it done that day. The immigration lady, seemingly annoyed that we did not speak very much Spanish, kept us waiting whilst she sent text messages, changed her ringtone, chewed bubble gum loudly and burst bubbles (a professional touch I thought), and generally wandered about killing time to extend our wait. A pain, as the taxi driver was waiting for us outside to take us back but we kept our cool and eventually got our passports stamped for three months at a cost of $2. We then went to several supermarkets trying to get cash back on our visa card as there are no ATM’s in the town and we needed to repay Kalea as they were soon leaving for the San Blas islands. Several card machines wouldn’t work with a lack of signal, but eventually we had success at a very large cost, 10% commission! Ouch! But still cheaper than a $60 return taxi ride to the nearest ATM at Sabanitas, so we had to stomach the extra cost.

The day after our sun baked arrival the heavens opened and rain has poured from the sky in stupendous volumes ever since, usually accompanied by loud thunder and wicked bolts of lightning. It is definitely still the rainy season in Panama. It has been nice to spend some time with Iris and Martin and catch up on the last few months since we saw them in Providencia. Today we say our goodbyes again and head 25 miles south west to Colon, staying in Shelter Bay marina next week for a few days to collect our parts and fit the new engine mounts.