With flat seas and light winds we sailed from Boqueron on the west coast around to the south coast of Puerto Rico, the beauty of this island is that there are lots of nice anchorages along the south coast making it enjoyable to move on in short hops. 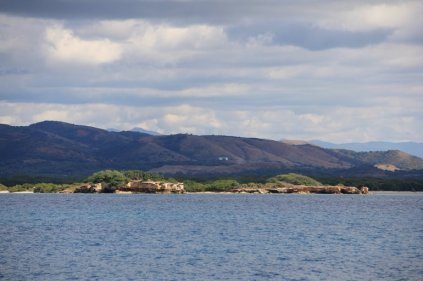 As we got close to our next anchorage at La Parguera we saw two big dolphins and one had a tiny baby by its side. Mother and baby hung back as the other adult came and played underneath our bow for ten minutes squeaking the whole time. 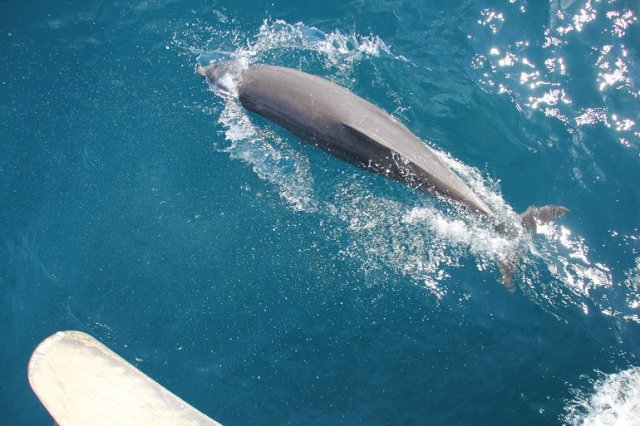 La Parguera is a small seaside town tucked up behind several reefs and mangrove islands making it a really protected anchorage. As we sat having coffee on deck the following morning a manatee surfaced a few times by the boat, they are just too quick for me to photograph! 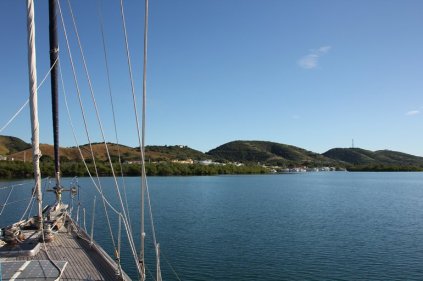 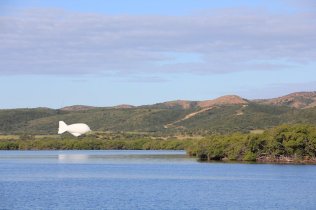 La Parguera is another very pretty and lively town, not quite as charming as Boqueron but nevertheless pleasant to visit.  Although it has no beach, the sea front is lined with mangroves and beautiful little houses over the water.

It was difficult to drag ourselves away from such an idyllic anchorage, but the weather continues to be settled for a few days so its a good chance to continue east.  We stopped at another couple of picturesque anchorages along the south coast, tucked up behind reefs or islands.  Then on to Ponce which is a large city and the main anchorage is inside the harbour where there is a fishing and yacht club, a small marina and a large commercial port which is really ugly.  The anchoring area is tight and full of local boats on moorings, so we resorted to anchoring just in the entrance which didn’t have quite so much protection from the gentle swell.

If you ignore the close proximity of the commercial port the harbour is attractive and lined with restaurants all pumping out music of difference genres and decibels which apparently go on until 3am at weekends, we were glad to have arrived mid-week.  To get some exercise we walked the 7 km into the city to find a supermarket.  One great thing about Puerto Rico is the shopping, we were blown away by the huge stores here and in Walmart my eyes were on stalks as we browsed around the well stocked aisles with just about anything and everything available.  The 11.5% tax they add on at the till however wasn’t a nice surprise. We caught a taxi back to the harbour by mid-day and after a quick phone call to Customs to confirm our departure we were ready to leave Ponce.  The wind was on its way south, turning south west then north west overnight which is a pleasant point of sail for us going east.  St Thomas therefore was our next destination, here we can take delivery of a part from the US for our Onan generator, after it failed to start Jez found the PCB which is the main brains of the generator had a couple of hot spots, and as it is the most expensive part of the kit we have everything crossed that this is the culprit. In the meantime we have been using our donkey engine to power the hydraulics for the windlass, it may be a little slow but it works well and is a great backup.