It’s been a very sad couple of weeks here in the Caribbean with some of our beloved islands devastated by Hurricane Irma packing 185+mph winds.   Hurricane Jose followed closely behind but stayed far enough north of Irma’s track to limit additional damage.  And as if that wasn’t enough, today Hurricane Maria has been rapidly intensifying as it approaches the Leeward islands as a dangerous Category 4 storm, Martinique and Dominica look as though they will be first on the hit list in the next couple of hours. 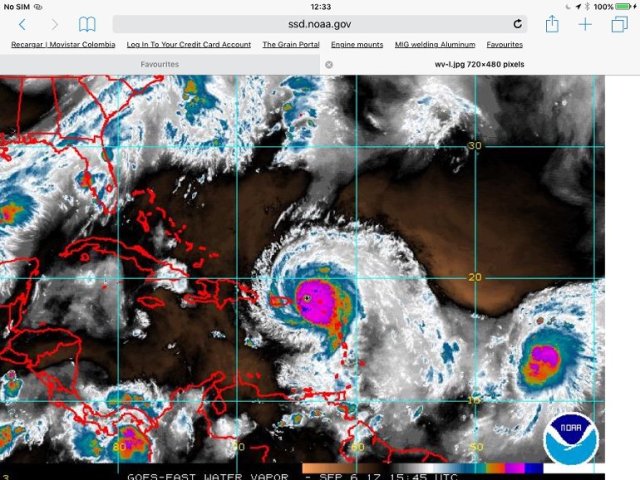 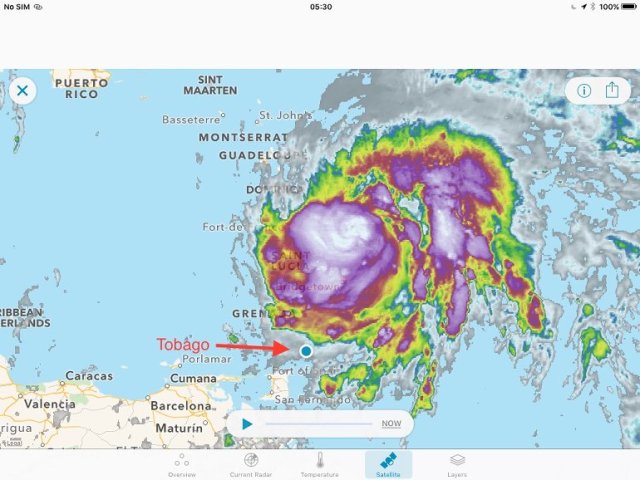 Hurricane Maria just above us today, approaching the Leewards 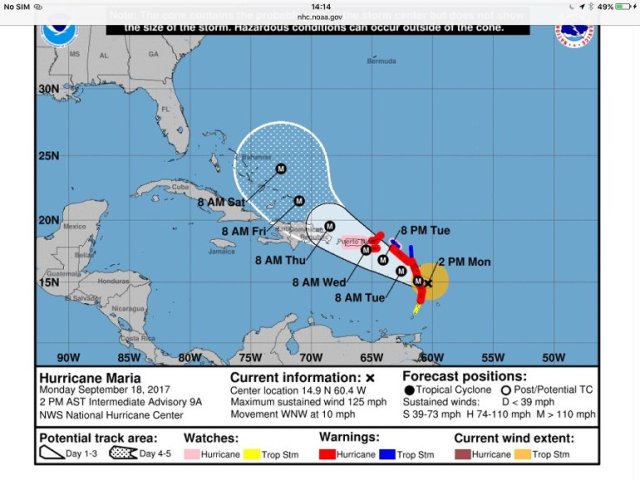 Hurricane Maria’s forecast track today, she has since intensified to a Cat4

Our anchorage in Tobago is nicely south of the tracks these storms have followed, the only adverse conditions we have had to endure has been large swell pushed into the bay making all the boats rock and roll. Maria is currently 230 miles north of us, surf has been crashing across the reef and rocks here for the last 36 hours and pounding on the (now empty) beach.  It has been an uncomfortable couple of days yet again – but we are thankful to be safe.

One of our favourites, Barbuda, sadly took a very bad hit from Irma and was soon declared uninhabitable, the residents were evacuated to Antigua when Jose approached. Barbuda is a small low-lying island just 40 miles north of Antigua with a community of about 1600 people, we had the pleasure of visiting in 2014 along with our cruising buddies Steve and Ange on s/y Pannikin which made it even more memorable.  Here are some of our memories of a very special place, lets hope the people of Barbuda can rebuild and return to their island as soon as possible. 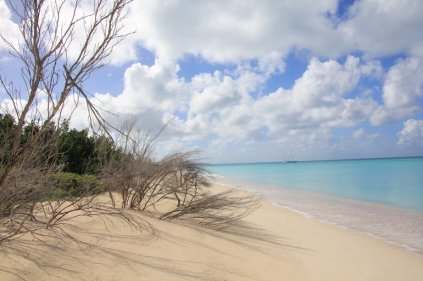 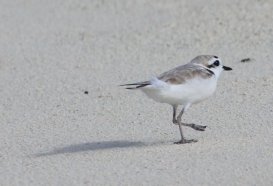 Meanwhile, life on Tobago continues relatively unaffected. We usually catch a maxi-taxi down to Scarborough to visit the supermarket (an interesting ride last week when a small bird, a Bananaquit, misjudged its flight across the road and flew straight into the open window of the crowded van, flew around our heads for a bit then landed in the boot, the kind driver stopped at the top of the hill to let out the hitch hiker) but this week we decided to hire a car from Gerome at Papaye’s Kitchen in Charlotteville and took the opportunity to explore the island. It was also great to load up the car with provisions and we finally found a meat shop that actually had meat in stock, we also got our LPG cooking gas cylinders refilled at the plant near the airport.  The west coast is absolutely beautiful, the road is ‘rustic’ from Charlotteville to Parlatuvier, in a bad state of repair and overgrown in some places reducing the road to single file – it reminded us of some of the lanes on the Romney Marsh back home, just without the steep drops on one side. 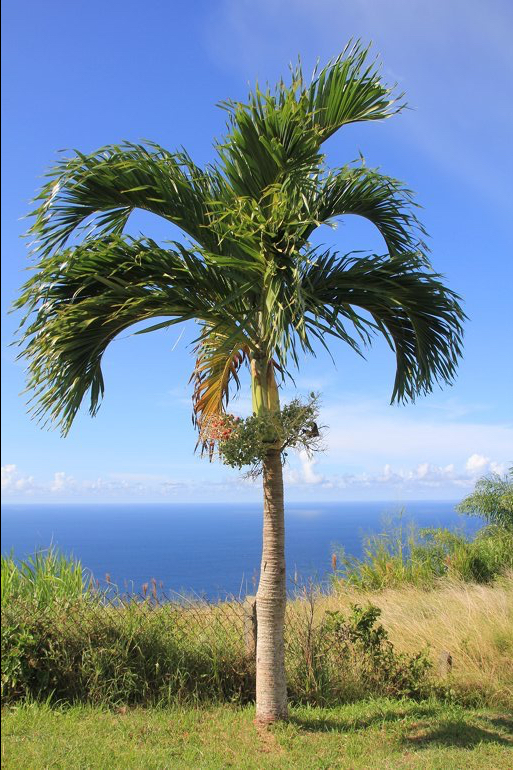 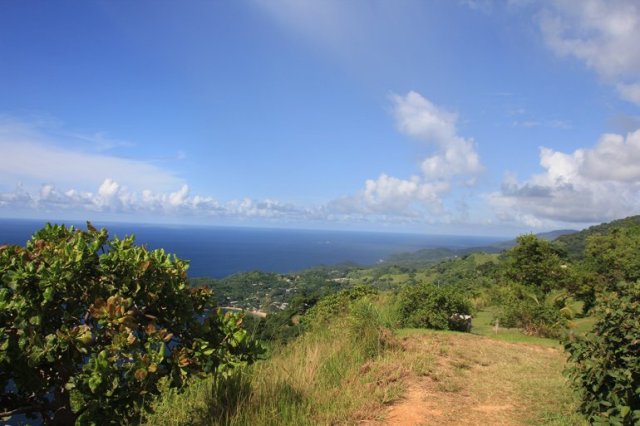 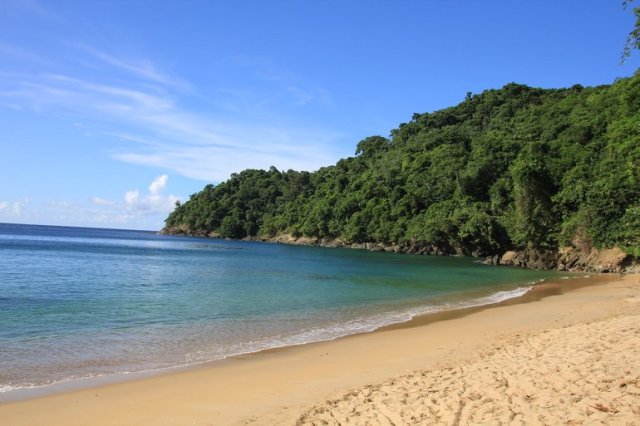 The Glasgow Bar – and the parrot – have a great view 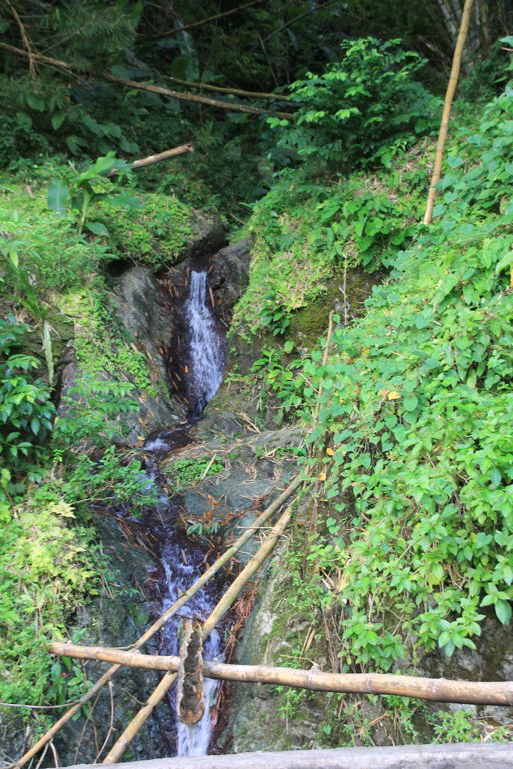 A clever of use of the abundant bamboo, channelling water from the small waterfalls enabling it to be easily collected 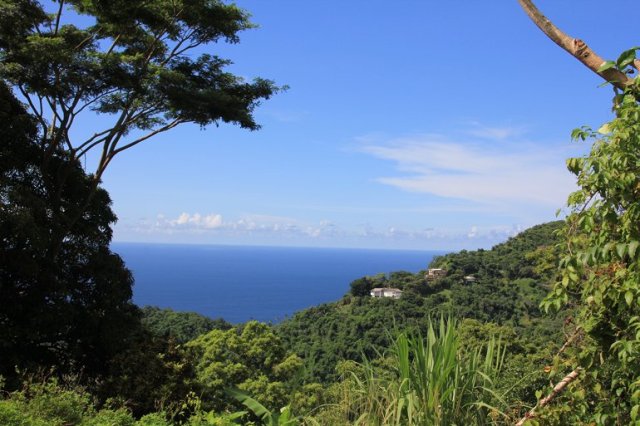 This huge tree has taken over half the road 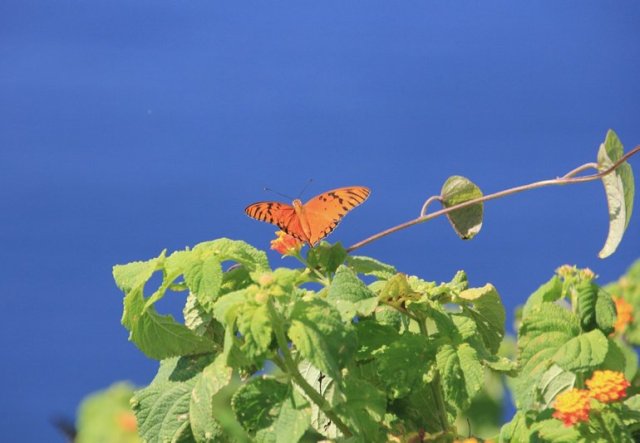 The calm before the storm

Tonight we say a prayer for the Caribbean once more.