A Warm Welcome in Mexico

Our sail from San Francisco to San Diego was quite enjoyable, once we had got through the rather rough and bumpy entrance/exit to the bay (wind against tide, yuk) conditions improved and we had enough wind to sail the 450 mile passage until the last few hours approaching land.  In those last few hours we managed to hook three chunky tuna and a Pacific Bonito which kept us busy prepping and vac packing, 33 meals for two in all. Not a bad days fishing! A Pacific storm was following behind and as we approached the harbour a small craft warning was put into effect with gale force winds and high surf expected overnight. 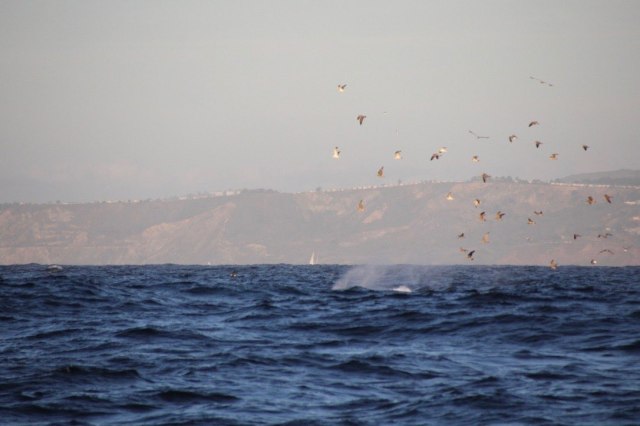 A few brief glimpses of whales 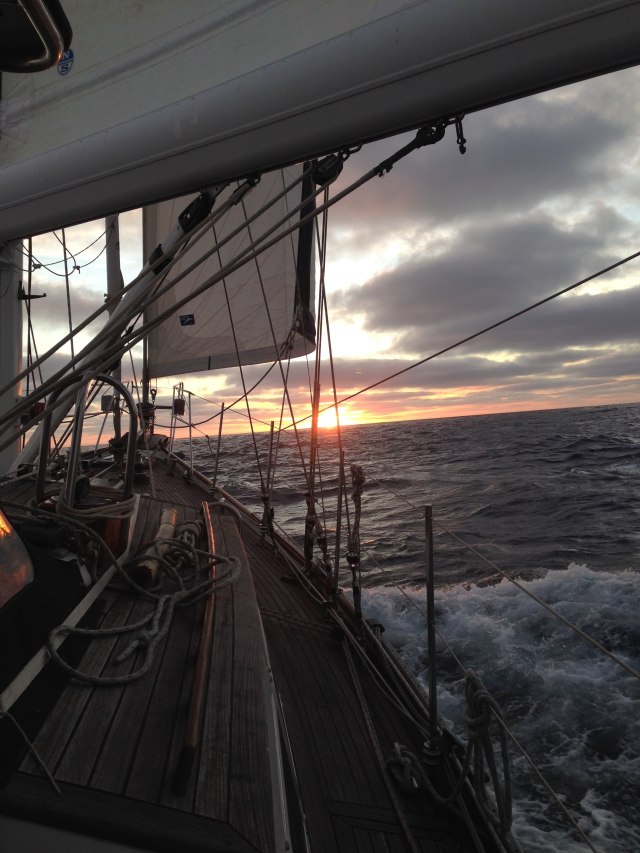 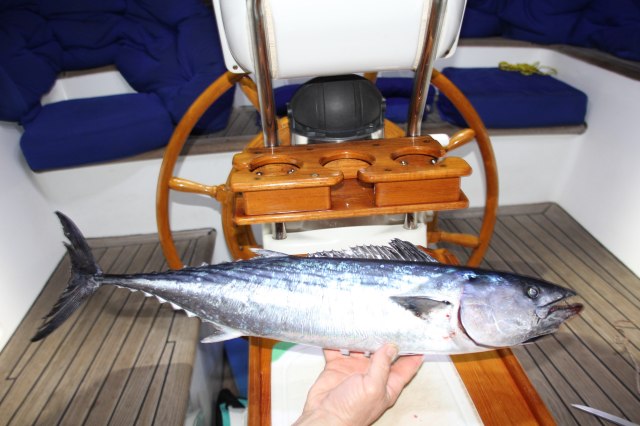 Final catch of the day, a little Pacific Bonito – quite possibly the tastiest fish we have ever eaten! 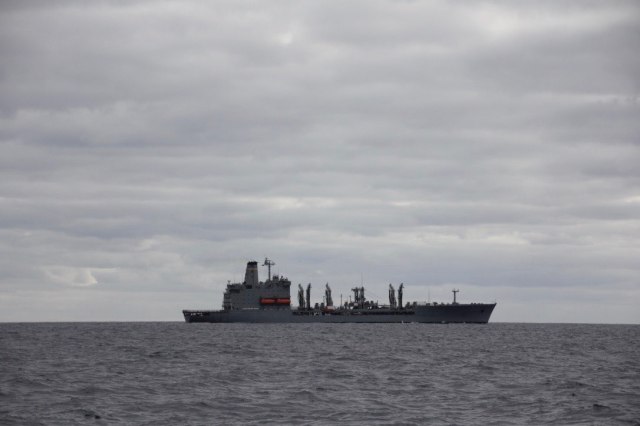 US Navy ship on border patrol 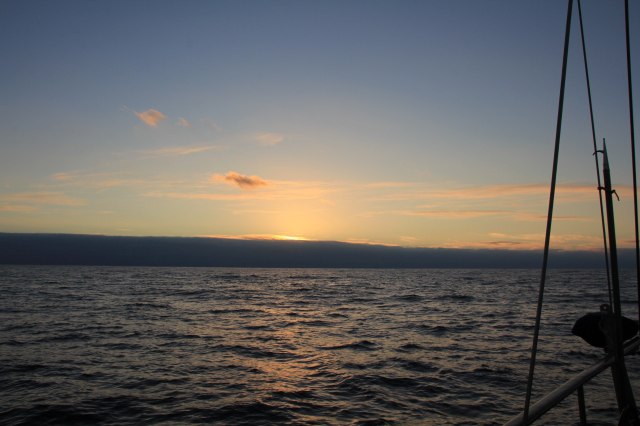 The storm approaches behind us

I called the San Diego anchorage ‘hot line’ using the Sat phone to get our permit brought forward a day as we had made such good time, but infact discovered that the small craft warning had done us a huge favour, as all three anchorages in San Diego harbour were open without the need for a permit, which meant we could take shelter in the very protected La Playa anchorage normally only open at weekends. This also happens to be close to all the marine stores and services so we managed to get a lot done here.   Apart from a few dilapidated vessels dragging anchor in the strong wind, the storm passed over uneventfully in a couple of days and after the weekend, when the small craft warning was lifted, we were issued a permit to anchor in the ‘A9 Cruisers Anchorage’ after a brief inspection.  This small anchorage is open only to visitors but it is quite a dinghy ride back to the shops.  San Diego is a great place to obtain any marine part, and indeed service of just about any kind.  We got quite a few parts that we needed including the new autopilot controller and rudder feedback which we ran cables for and fitted, and did a few other jobs which we had been planning such as beefing up the helm pod with some stainless steel grab bars.  It has been ‘wobbling’ for some time and as it’s the only thing to grab hold of in the centre of the cockpit it was in desperate need of some stabilisers.  I also managed to get some free offcut sail material from the canvas shop to make up new bolt rope tape for our mizzen sail cover which slides along a track inside the boom, the cover and tape had parted a while ago. Another canvas shop generously gave me an 8 foot length of bolt rope track to replace the fixing where the spray hood meets the coachroof to improve watertightness. A project I will complete in Mexico hopefully. We were taken aback by the generosity and helpfulness of the trades people here.    So San Diego was sadly all work and no play.  The cruisers anchorage is also a little uncomfortable as it’s open to wake from all the boats coming and going and when we returned to La Playa the following weekend hoping for calmer water we had some rather close encounters with some local boats anchoring so close we could have passed them a beer. And not to mention the same boats from the previous weekend dragging yet again. It was bedlam and rather stressful. 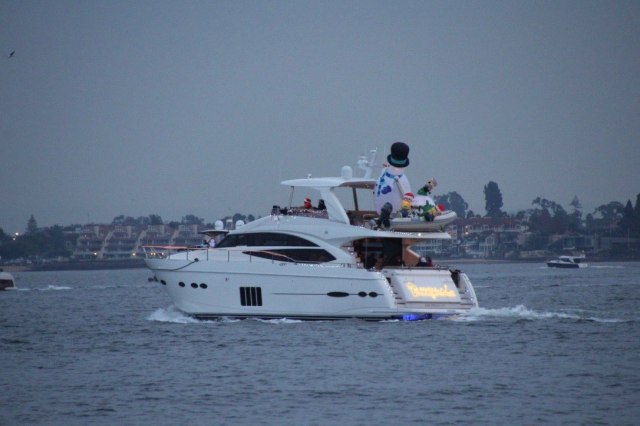 The Christmas boat parade was fun but joggly, hence only one photo! 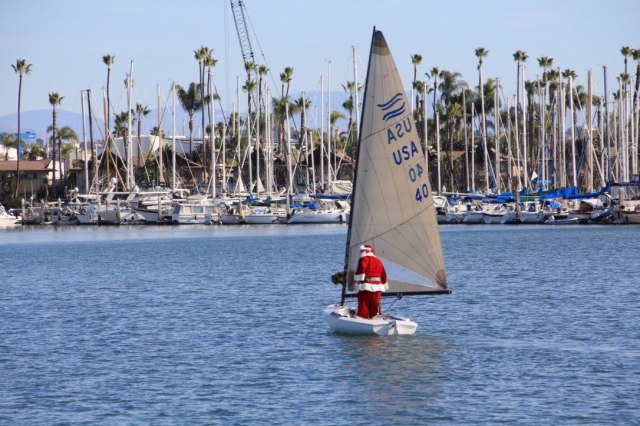 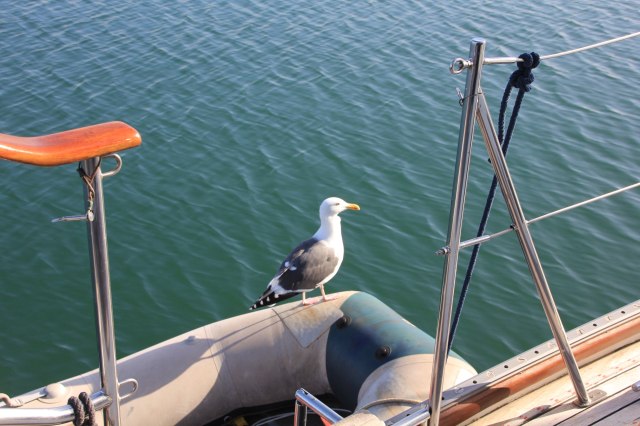 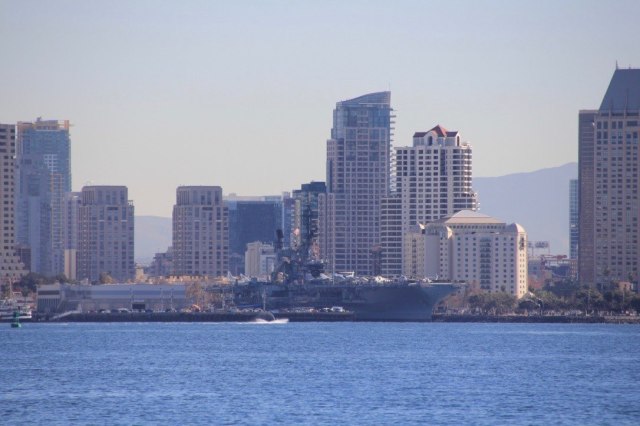 One of the three aircraft carriers in San Diego Bay, The Midway, is a museum open to the public 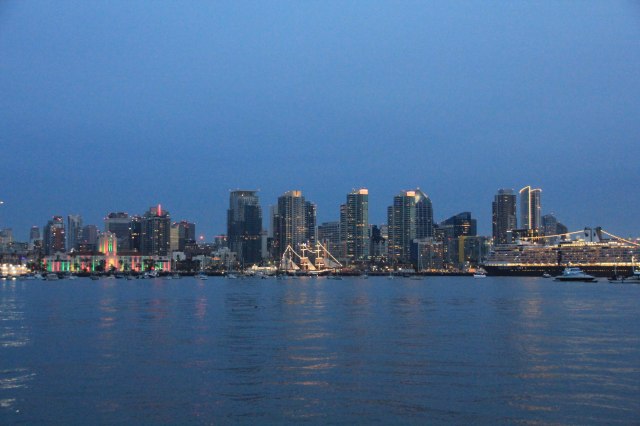 Once cleared out with US Customs we breathed a sigh of relief as we headed back out to sea with our first port of call being just 70 miles away at Ensenada, Mexico. 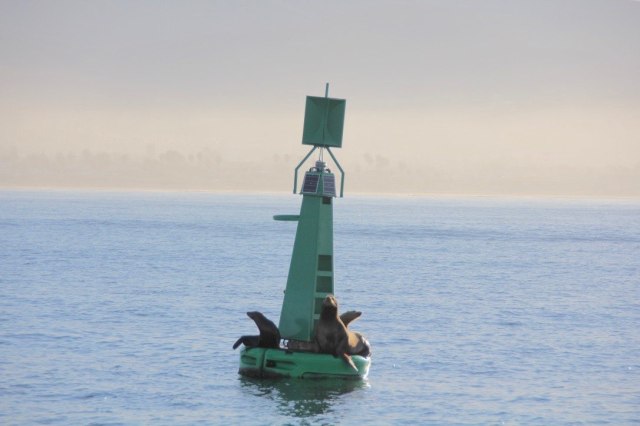 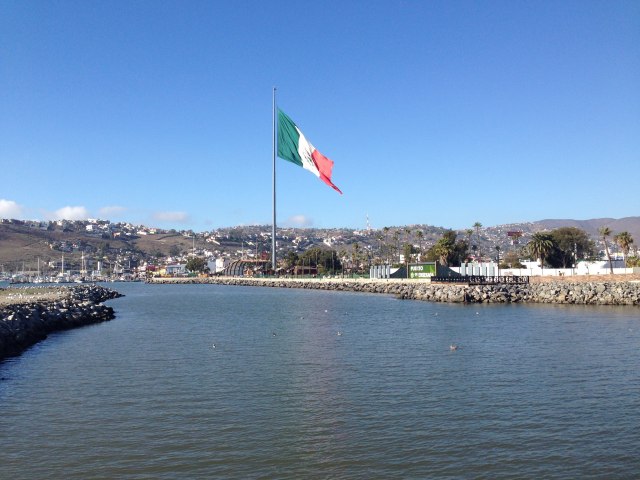 This seemed like the best place to clear in to Mexico as they have a ‘one-stop shop’ set up with Immigration, Customs, Port Authority and boat registry kiosk (to obtain the all important ‘Temporary Import Permit’ for Joy) in one building.  The only down side is that there is no anchoring allowed in the harbour, so it’s a marina berth or nothing.  We chose Cruise Port Marina as it had good reviews and less swell reported.  It was well worth paying for a marina berth here, as quite unexpectedly they dealt with all of our clearance paperwork – infact they actually produced all our clearance papers,  so there was no need to be printing off crew lists and arrival forms in Spanish as we had been advised.  They took our passports and boat papers and within half an hour all our paperwork was ready, this was passed to Enrique who drove us to the CIS office and then took us around the various kiosks telling us what to complete, where to sign and how much to pay.  In all the charges amounted to just under £110 including port fees. We were wanting to leave the following day (one night in this marina is half our monthly food budget!) and as our departure papers wouldn’t be ready until later that afternoon, Enrique would return to collect them and deliver them to our boat!  What a fantastic and efficient service offered by this marina and it’s all included in the marina fee.  That left us the rest of the day and the following morning to explore the pretty town and buy some groceries ready for our next hop down the Baja peninsular. Ensenada is a little bit touristy with cruise ships calling, but it still retains its Mexican charm and it was great to be back into reasonably priced groceries and beer once again!

With an unusually favourable weather forecast, showing wind almost all the way for the next week and Christmas looming, we decided to sail down to the Sea of Cortez in one hop.  At first the winds were light but the swell big, a knock on effect from the hurricane force winds tracking their way far across the Pacific to our north.  On day three and with a forecast of 20-25 knots overnight and 16 foot seas, we reefed the main before dark and Jez started dinner as I sat on watch.  At first a few gusts appeared in the late 20’s, but what was surprising was the speed with which the sea state deteriorated.  Within a few minutes we had large waves behind us building up higher than our davits, occasionally breaking on Joy.  The wind had increased to 30 gusting 35 and we had all of our 16 feet waves and then some.  The white water crashing all around us in the moonlight was mesmerising, I hadn’t seen a sea like it since our passage from Hawaii to Sitka only they were long rolling waves, these were breaking and in quick succession.  It wasn’t easy  ‘sleeping’, which in these conditions consists mainly of shutting eyes and telling yourself it doesn’t matter if you don’t sleep as long as you are resting. By morning things had got  a little more comfortable, wind eased to 25 and the distance between the waves increased so that we could ride with them a little better.  It wasn’t long before light winds had filled in yet again and we were back down to 4-5 knots of boat speed.  By day 8 we had only sailed 770 miles but were now at the southern end of the Baja peninsular, and rounded Cabo San Lucas in the early hours. For the last 24 hours we had two boobies settled on the bow and as the sun came up we discovered we had gained another overnight.  They all stayed with us as we headed in to anchor off the beach at Cabo San Lucas, only flying off when I went forward to get the anchor ready! 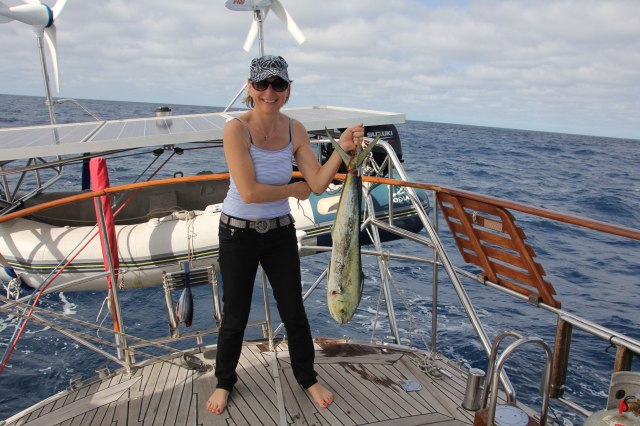 I reeled in a beautiful Mahi Mahi after a small tuna – spot the tuna hanging off the dinghy behind me! 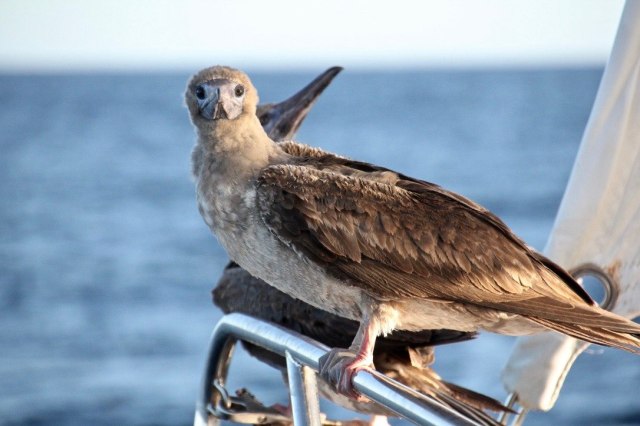 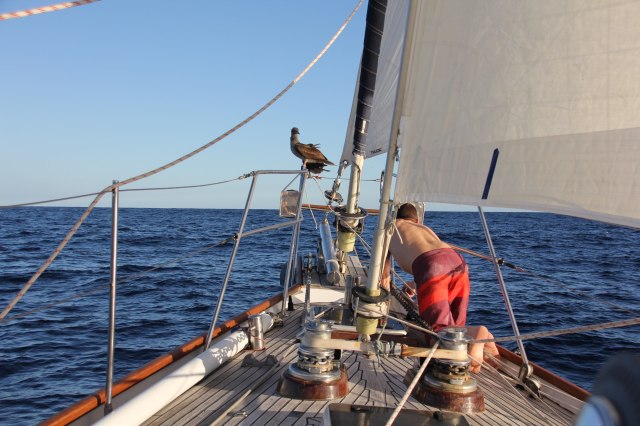 Jez creeps up on a pair of brown boobies, to release a furling line caught under the anchor 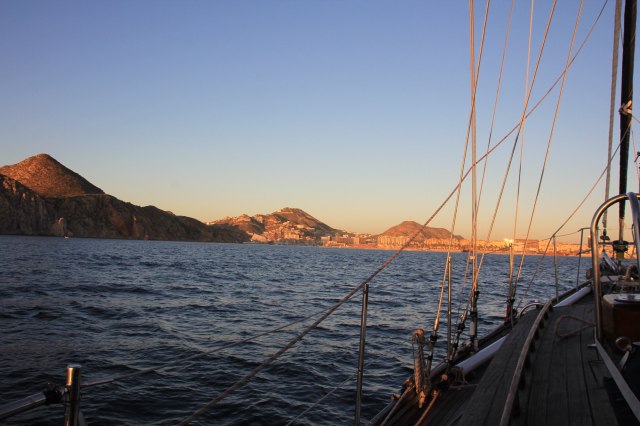 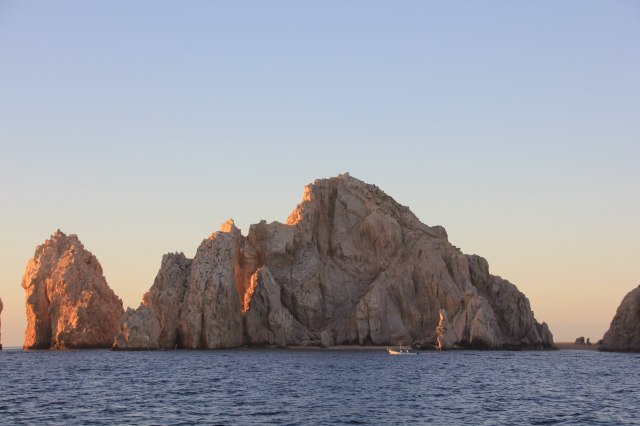 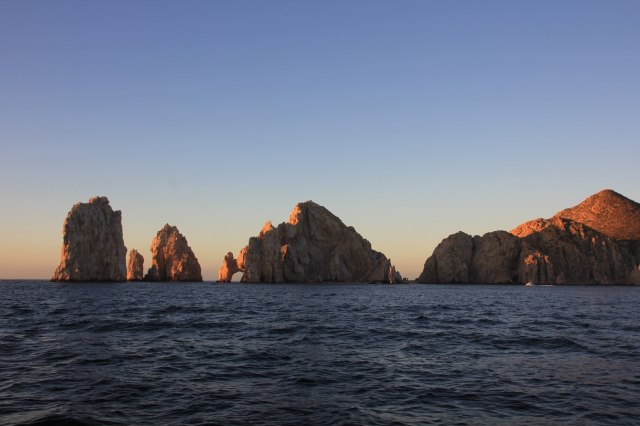 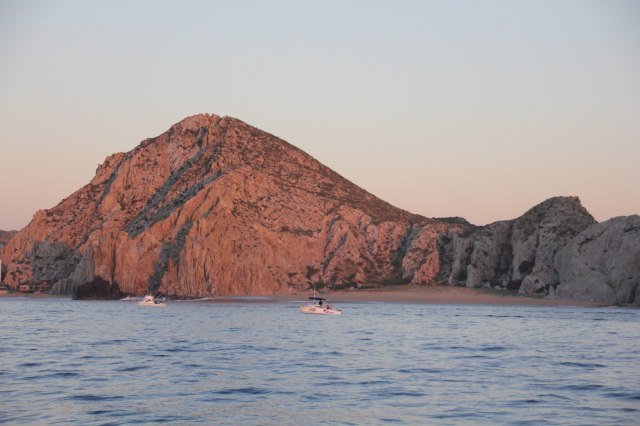 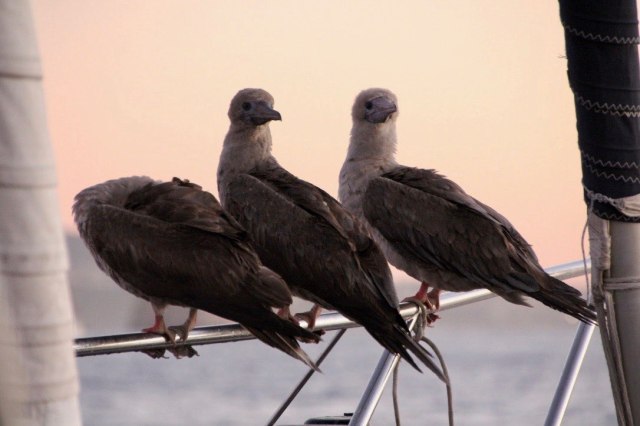 And then there were three

We had decided to stop here for a couple of hours just to reprovision with some fresh fruit and veggies.  That turned out to be a big mistake.  Cabo San Lucas is basically a tourist town, it doesn’t cater for the cruising sailor wishing to pop in and reprovision. We walked miles down all the streets looking for supermercado’s using google maps.  Out of the ones that hadn’t closed down or been knocked down, none had any fresh produce whatsoever. Locals directed us to Walmart which was on the outskirts of town and not walkable and by that point we had had enough.  Then we finally found one small cafe/mart that had a fridge with a sad looking iceberg lettuce, an avocado and what was once an orange in a previous life. We bought all three and got the heck out of there.  It had been tiring being harassed by just about every shopkeeper, restaurant and tour guide mistaking us for ‘tourists’ with ‘looky looky’, ‘free gift for the lady’, ‘tacos and beer for $10’, and just about any boat tour under the sun.  By the time we had returned to Joy in the anchorage with our measly provisions, the beach goers were in full swing with jet bikes, pangas, banana boat rides and parasailors. On the plus side however, the shorts had come out the cupboard and the coconut oil had finally melted. We made a quick exit to go find the real Mexico, and it wasn’t long before we found it.

After a couple of nights at the beautiful Los Frailes anchorage catching up on some sleep and tidying the boat up, we decided to carry on further around the southern tip of the peninsular to find an anchorage with a little less swell.  Los Frailes was affected by some southerly swell that had almost rolled us in the kayak as we reached the beach. A little embarrassing, especially as after our late afternoon walk we decided that a little better timing was required for our relaunch from the gravelly beach, despite our best attempts we were caught once again almost ending in a dunking. Let’s hope we weren’t caught on camera by the others in the anchorage! So on we bashed in some strong winds and short steep waves to a little peace of heaven.  Bahia de los Muertos, which thankfully doesn’t live up to its name ‘Bay of the Dead’, is a spectacular bay lined with a beautiful stretch of almost empty sandy beach,  sand dunes and cactus are the only things to contend with here.  There is also a small restaurant on the beach which serves up cold beer and delicious lunches with a view to die for. Beaching the dinghy here was thankfully less eventful in view of the restaurant. I did, however, have a small incident with a rather aggressive cactus. Climbing a steep rocky hill to get a panoramic view, with my cap on and head down watching where I was treading I walked straight into a cactus, stabbing my arm. The surprise sent me backwards losing my footing, slipping back down the rocky hill I grabbed hold of the first and only thing that came to hand to stop me falling – the same cactus. So now I had tiny needle-like thorns in my hand as well as my arm.  I had got most of them out by the time Jez had stopped laughing.   But still it was a perfect place to spend Christmas. 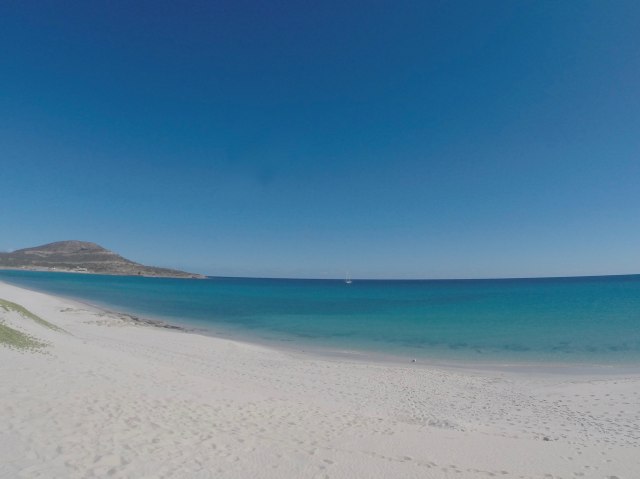 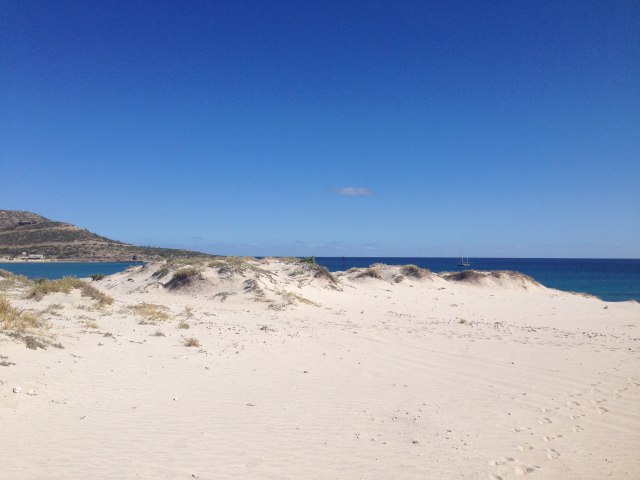 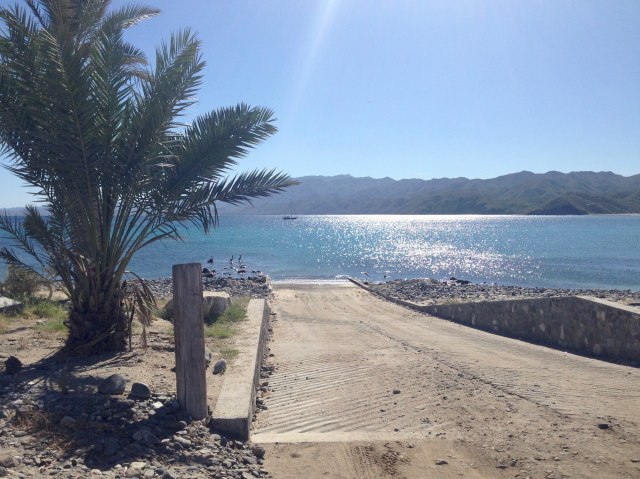 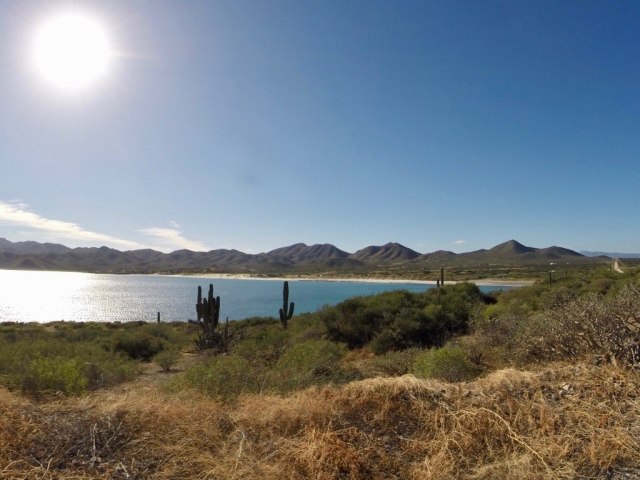 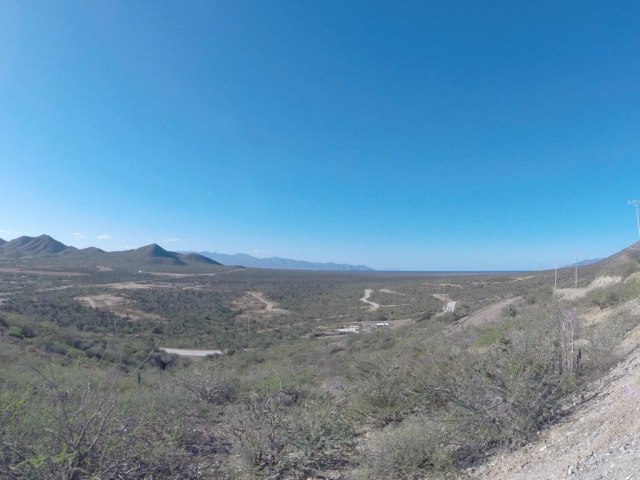 A network of dirt roads lead to this remote bay 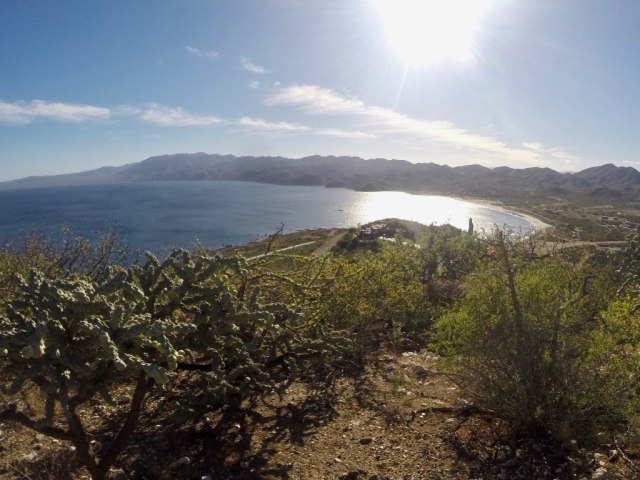 Watch out for the vicious cacti!

5 Responses to A Warm Welcome in Mexico