This is day four of rain, fog and alas – not even enough wind to blow the skin off a rice pudding. The sea and sky look gun metal grey, infact we haven’t seen  a blue sky since Thursday last week.   So the engine has unfortunately been propelling us south bound but we have found some beautiful anchorages along the way.

After a  good soaking on Friday we tucked ourselves into a sandy bay at Corme for the night, anchoring alongside three other boats.   The following day we continued under motor and in the afternoon we nudged our way into Ria de Camarinas, where our anchorage found us surrounded by beautiful countryside, still waters with steep tree lined banks – Oh, and there were the same three boats, anchored on the far side of the bay near the town and  marina.  We inflated the dinghy and sped around the bay to explore, very clear water even in the harbour where we found all the fish that have been avoiding our lines. 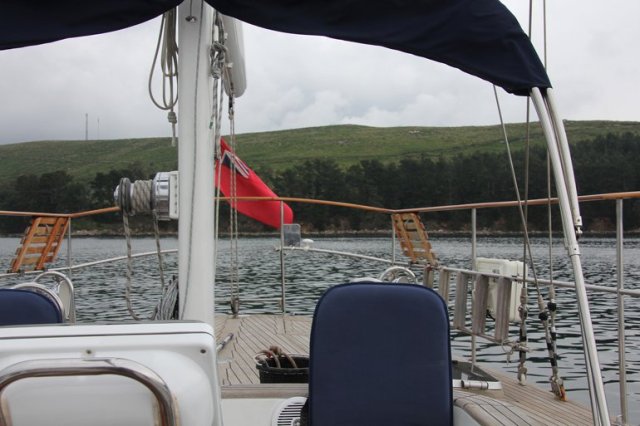 We were pleased to find that the harbour had a few places to tie up the dinghy and walk ashore without having to climb over fences or locked gates – and even better still, two supermarkets in sight.  A nice little town with a few bars and restaurants, we filled Dolly the Trolley to the brim and the icing on the cake – Glenfiddich at 25 Euros.  Our first sniff of Whisky for about 2 months.

The anchorage here was so quiet and peaceful, not a ripple on the water.  In the evening sitting on deck fishing (and no I still haven’t caught anything),  I watched a graceful Buzzard soaring above the hills, until it was rudely attacked by several sea birds who chased it away.   The following morning, with a bit of a Whisky head, we motored into more fog and rain, dolphins were surfacing in the entrance to the Ria but wouldn’t come and play.   We continued south in our waterproofs and thermals, and as we approached a fog covered Cabo Finisterre some 20 or so race boats surrounded us heading north with spinnakers up and only just filling with 8 knots of wind from the south.    I discovered how to use the deck wash hose so that next time I raise the anchor I can get rid of the mud before it fills the anchor locker! Actually, probably too late! 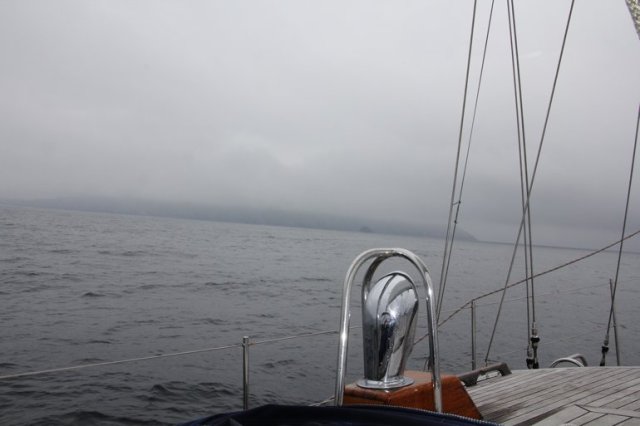 As we entered  Ria de Muros and headed for our planned anchorage at Portosin, the dolphins came to play at last. About 20 or so large dolphins riding the bow wave and jumping out to say hello.  They were all scarred on their backs, some with criss crosses and others with chunks missing from their dorsal fins.  I even heard their high pitched squeak, and then they were gone as quickly as they arrived.  Our best encounter so far with these magnificent creatures.

As we rounded the corner of the harbour wall into the bay to anchor, one of boats that we had shared anchorages with the last 2 nights was just dropping his anchor!  Two more followed in behind us some time later, out of the many anchorages in the area we obviously all have the same idea.

In between showers we went ashore to explore, unfortunately a disappointing harbour at Portosin with run down houses and land mines littering the pavements from local pooches.  We got a soaking landing on the sandy beach for a walk and a beer, the shore is very steep and waves break onto the dinghy before you land.  Quite exciting getting back out too!

With wind forecast from the south for the next couple of days, we may stay put for a day or so until the wind turns to a northerly later in the week and we can then get sailing again and continue our journey.