We left Tobago with very little wind, so unfortunately we motored for a couple of hours before picking up a wonderful breeze which enabled us to sail faster than we had motored.  Dolphins joined us close to the north shore of Trinidad and stayed with us for a little over two hours.  They were huge dolphins and with such a murky green sea, they reflected back a toxic looking green on their whiter parts.

Sick of dolphin photos yet?! These were taken with the GoPro. 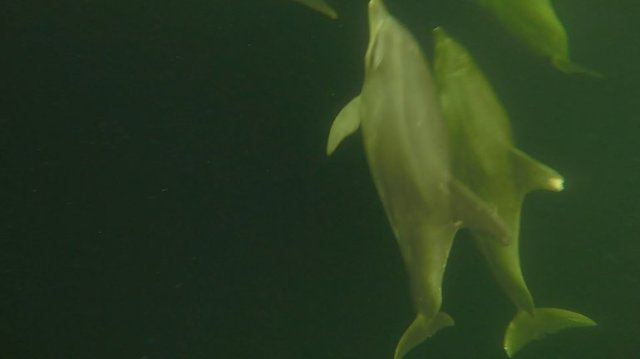 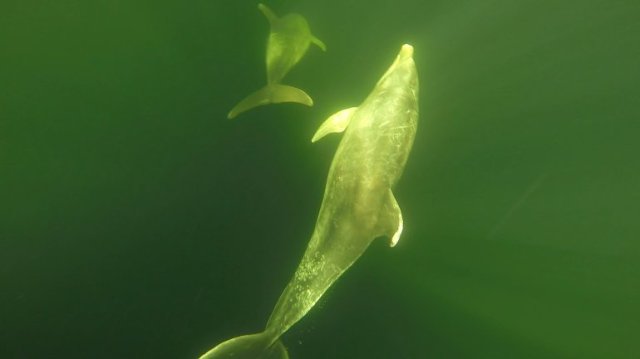 A squall passes us by.

Trinidad is a large island, and it took several hours to sail along it and in between the islands on the north west tip heading for the main port of entry,  Chaguaramas. It all looks very beautiful until you round the bay into the port, and UUGGHHH it hits you.  This is a very busy commercial port, the water is black and smells of oil with heaps of rubbish floating around in it.  This is by far the worst place we have been in the Caribbean, I wanted to turn around and leave straight away.

The designated anchorage here is small, an imaginary triangle of black water, 20 metres deep, and packed with boats.  Finding space for Joy proved impossible. So as we had wanted to clear in at customs before they shut at 6pm we gave up and moored up against the customs dock in the harbour with the intention of getting permission to go back to the remote Scotland Bay where conditions looked nicer.  A couple of minutes after tying up I heard someone shout ‘Pixie’ and knew it was Steve from Pannikin, they were berthed in the small marina opposite customs.  After clearing in we placed ourselves on a temporary berth against the haul out dock as the marina office was shut and after a couple of beers with Steve and Ange we had a very quiet night sleep there.  The marina staff the following morning were not interested in finding us a proper berth, and after some pleading the guy said we could stay where we were for another night. We actually stayed another two, no one from the marina bothered to come and check so we took full advantage. It was a great excuse to catch up with Steve and Ange again and have a few games of dominoes by the small pool. Our first day there was spent ferrying jerry cans full of cheap fuel from the local station, first to Joy and then to Pannikin. Around 18p per litre so it was a day well spent, especially as we needed 550 litres! Breakfast in Trinidad consisted of a ‘double’ from a local vendor, it’s a double pancake with a sort of curried vegetable filling, rather messy to eat as it usually ends up around your face and up your nose, but delicious. And at 40p each who could want for more?  You could certainly live very cheaply here, if you can put up with the surroundings. So after 3 nights we checked out and hit the road again, desperate to get away from the intense heat, lack of wind and torrential rain. 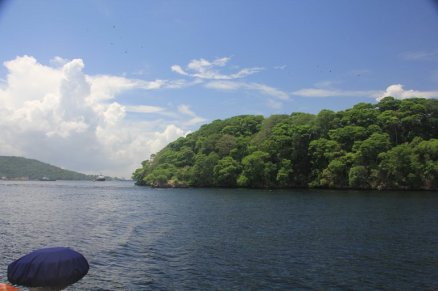