When we arrived at George Town, Grand Cayman, we were instructed by Port Authority to take up a visitor mooring whilst they cleared in two superyachts who had arrived before us. A yacht that had arrived an hour after us was directed almost straight onto the dock for clearance so we were a bit surprised that 5 hours later we were still sat waiting to be called in.  Nine boats in total arrived the same day, so for the authorities there seemed to be a lot of confusion.  At last it was our turn, as we approached the concrete dock in astern a hydraulic hose burst in the engine room and we were suddenly without the bow thruster which would normally help docking. Luckily we made it onto the dock without any problems.

After clearing in we had rather a mess to clear up, over 20 litres of oil in the bilges. The hose took a further two days to extract, at 5 metres long it runs from the generator in the engine room to the forward bulk head which meant removing 125 metres of chain from its locker to get to the fitting.  There are no mobile hydraulic repair services on the island so we had to remove the whole hose and carry it 3.5 km to Nappa for repair after two others on the way could/would not do the job. We were feeling rather lucky that this had not happened in the remote cays of Cuba.  At least we were on a mooring here and could get the job done without needing the anchor.

George Town is a very busy place particularly when a cruise ship is in port, on some occasions there have been four at once. Jet skis and dive boats roar through the moorings at alarming pace. Ashore there are activities, attractions and restaurants to meet just about any need and the people are friendly and welcoming.  My mum arrived from the UK for a two week break on board, such a lot to catch up on after 13 months apart. We hired a car and explored the island together, it’s the easiest way to get about and at only $15 a day with Firefly it must be the cheapest rental in the whole Caribbean.

Once out of touristy George Town, the roads are quieter and the pace of life slows down. Iguanas amble pre-historically across the road playing chicken, not always successfully,with the cars.  I noticed a distinct lack of sea birds in comparison to the other two islands, but this is made up for by the large number of cheerful grackles with their ‘rusty hinge’ call and  hens with their chicks wandering through bars and restaurants hoping for a crumb. The local KFC on a busy street in town even has a chicken who brings her chicks to the outside seating to be fed each day, maybe not realising that her distant relatives were on the menu.

Count the Iguanas clinging to this house

Our first stop was the Queen Elizabeth II Botanical Gardens where we followed the trails around the beautiful gardens and through the woodland.  Nature is usually at its best in these places, a wonderful eco system supporting life in every form.  Flowering lilies on the ponds were attracting large numbers of dragonfly and dozens of green parrots gathered in trees to eat the fruits. We had several sightings of Ladderback Woodpeckers too showing off their wonderful markings and bright red heads.  The gardens also house the endangered Blue Iguana sanctuary, a recovery program trying to increase their numbers to over 100, although they weren’t easy to see through the walls of the enclosure.

The beaches around the island are stunning, crystal clear water shimmering in the sunlight every shade of blue imaginable. We took the opportunity to picnic, swim and play dominoes at Spotts Bay, Cemetry Beach and West Bay where cabanas and trees provide much needed shade in the 30 degree heat. 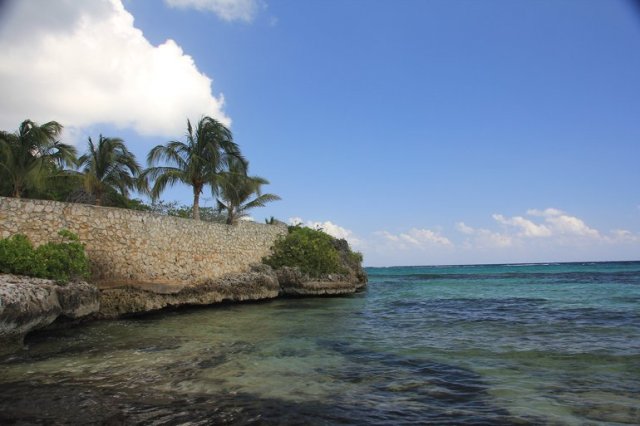 Yoga on the beach anyone?

Pedro St James is a historical house on the island now in the hands of the National Trust, originally built in 1780 by a wealthy Englishman it has been beautifully restored and is now open to the public.  We were given a tour by a local man who had family connections to the house and an amazing knowledge of its history. Overlooking the south coast, the 7 acre gardens are also immaculate and home to the only remaining donkey on the island, aged 36 Jack looked rather delicate. 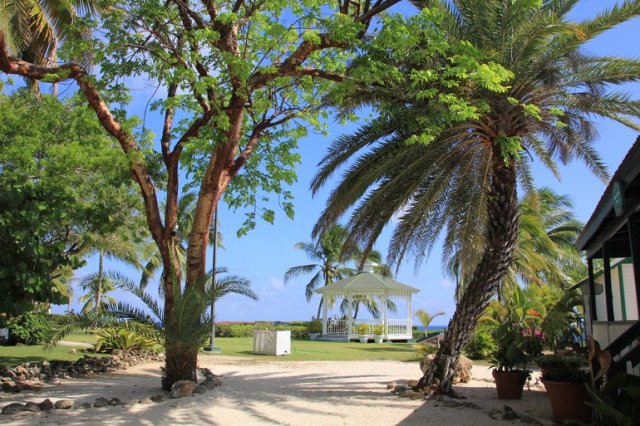 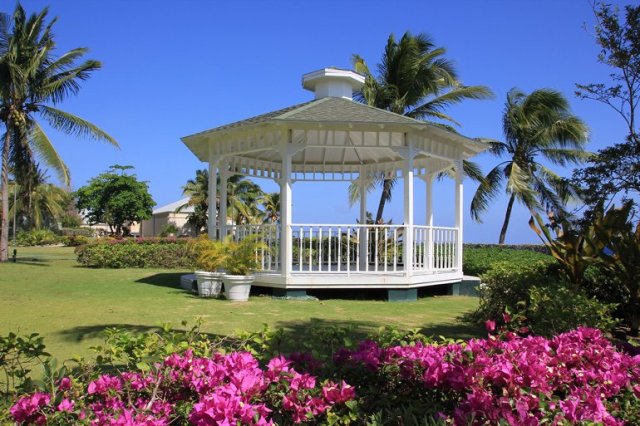 After a great week exploring we were forced by the weather to leave the mooring at George Town and seek shelter on the north coast as the wind started to clock to the south.  We took up a mooring on the outside of the north sound and had a comfortable night knowing that George Town would now be untenable.  The following day the wind continued to clock to the west and we spent the day sailing around to the south coast.  Good job my Mum has very good sea legs and enjoys sailing whatever the weather. There was still some swell running and although protected from the wind we did have a rolly night, but a dive on the reef below the next day was outstanding.  Huge boulders covered in coral provide a 3D dive experience with a tunnel that you can swim through. We were followed for an hour by a large fish intent on getting in between Jez and I and he was not at all camera shy.  Two large green morays lay in caves within just a few metres of each other, and queen conch dragged themselves across the sand patches in between. It was one of the most memorable dives we have had. 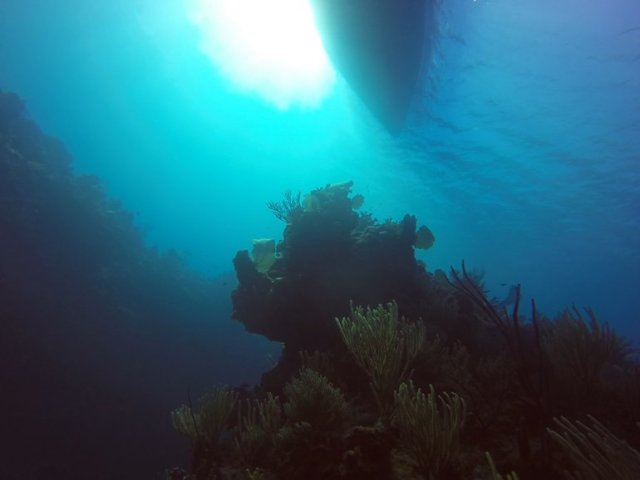 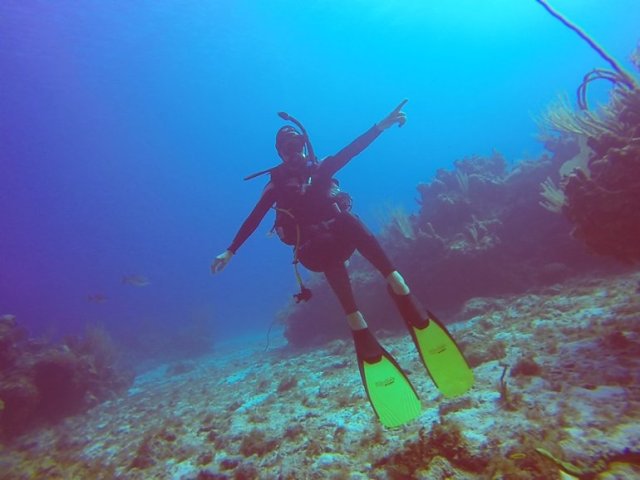 Finally the wind turned to the north east and we sailed back around to the west hoping to return to George Town for the carnival parade on Sunday.  Two miles offshore we heard a call on channel 16 requesting assistance for a jet bike with two persons onboard in trouble a mile off of George Town.  A yacht on a mooring had called it in, having spotted it earlier that morning.  We were heading that way so kept a sharp lookout as we tacked back in towards the shore, nothing obvious spotted.  I had noticed that a large commercial mooring happened to be in roughly the same area, so we put in a tack and headed over to it and radioed the yacht again, they confirmed we were right where they thought the jet bike in distress was.  A ‘should have gone to specsavers’ moment, for the jet bike and two persons was actually a steel drum mooring with a metal fixing sticking out of the top. A relief that we did not have to do a recovery in such strong winds and large swell.  We returned to the mooring at George Town only to find that the moorings were rather dangerous in the swell although two catamarans were determined to sit out the conditions.  We continued north to 7 mile beach where we found a very settled spot off the beautiful West Bay beach.  We had unfortunately missed the carnival but at least we were safe and comfortable. 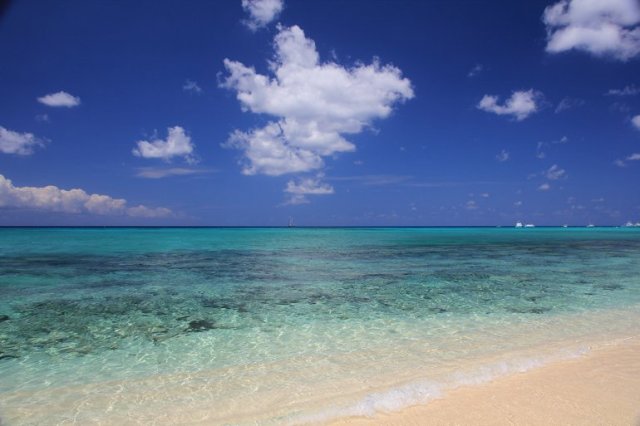 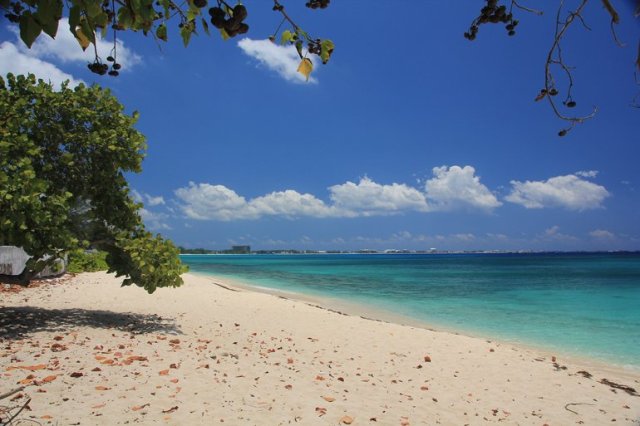 Following a swim off the beach in warm crystal clear water the next morning, we had a superb lunch at Al Fresco’s overlooking the bay and then sailed down to George Town where conditions had improved considerably.  Just in time for cocktails at The Lobster Pot as the sun went down.

The last two weeks have just flown by, for Mum’s last night we had dinner at The Grande Old House, a restaurant in a beautiful plantation house on the coast just south of George Town. After a wonderful dinner ‘on the rocks’, very grand decking built over the rocks at the back of the house, we were treated to a tour of the house by our waiter.  A superb end to a wonderful holiday with my Mum. As she sadly returns home we are getting ready for a three day sail to Isla Providencia with a favourable forecast. 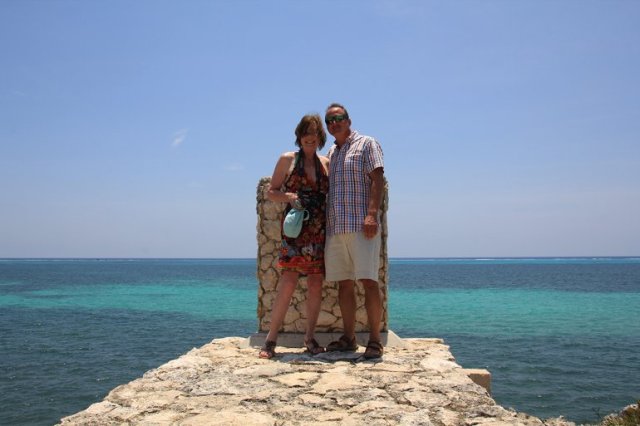 The two loves of my life, Mum and Jez