Shortly before the mayhem of Carnival started we managed to explore the island further with Ted and Barbara from Rosa dos Ventos.  With so much rain over the last couple of weeks the island is now flourishing and previously bare trees are now covered in lush leaves. 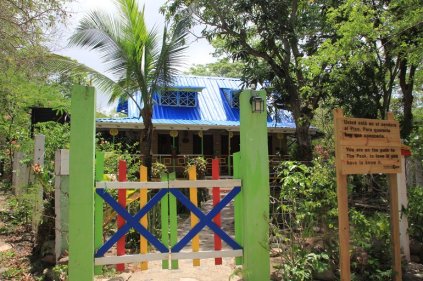 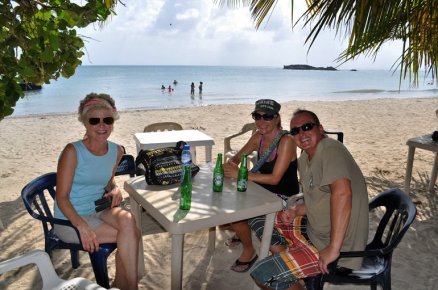 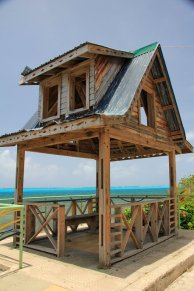 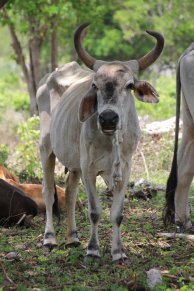 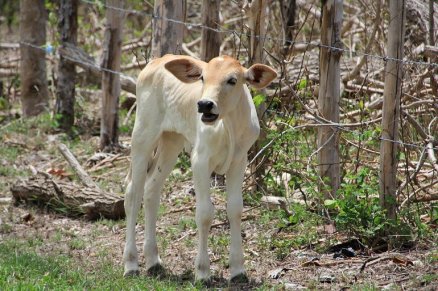 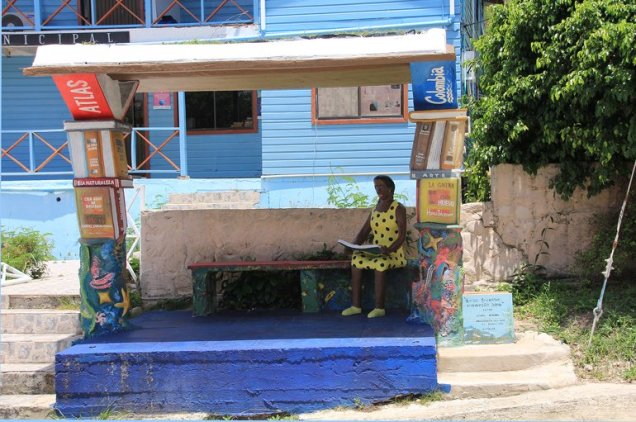 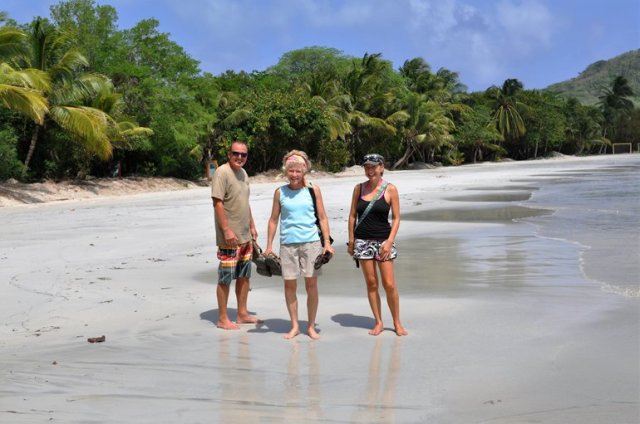 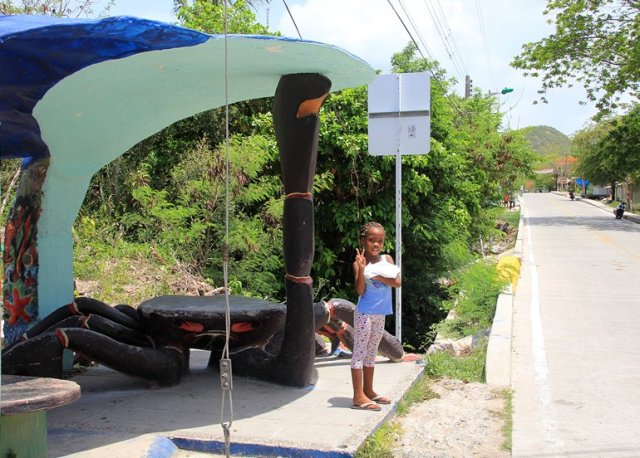 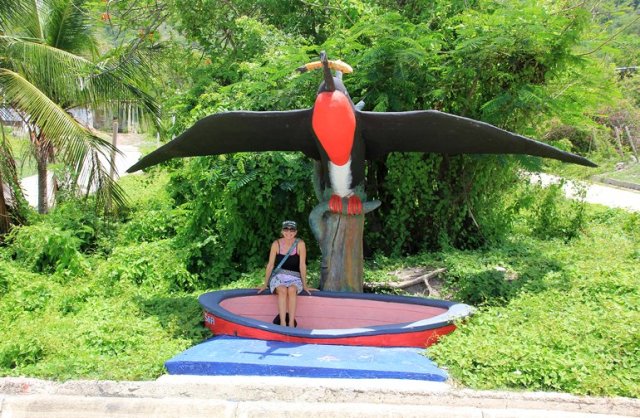 This has to be the most ‘Magnificent’ Frigate Bird bus stop in the world!

As we had transport, we took the opportunity in the evening to go out to dinner at ‘Martin’s Place’ at Freshwater Bay.  The food was excellent, Jez had been yearning for a beef steak and wasn’t disappointed.  I had skewered rock fish cooked in curried butter which was divine.  We met a lovely local couple, Paul and Becky, on the table next to us who were out to dinner with their son Joshua to celebrate Paul’s Birthday.  Becky is from Providencia and Paul grew up in Bogota, Colombia and they have now settled back on the island.  They were an interesting couple, passionate about growing their own produce and cooking with traditional methods. Becky has a relative with a plot of land high in the hills where they grow produce including pineapples, avocado and yam.  It’s a 1.8km steep hike for them but they still manage to haul their tools and produce to and fro.

Carnival week on the small island of Providencia attracted a rally of Colombian sailboats arriving into the anchorage on a wet but calm morning.  Several boats decided not to use the buoyed entrance channel, and one hit the small patch of reef lurking behind us and got stuck on it, eventually managing to reverse off it after several attempts.  The dozen or so boats, loaded with crew, nestled among us cruisers and dropped anchor without making sure it had dug in.   It was inevitable therefore when the wind picked up in the afternoon that one by one, five started dragging. The most astonishing was the boat anchored ahead of us, the one remaining crew member left on board hadn’t noticed he was dragging because he was too busy watching another boat with his binoculars! No problem, we thought, as we could see the rest of the crew now pulling up to the stern in their dinghy, but they all clambered on board and sat down, also not realising that they were now 50 metres from where they had anchored, side on to the wind and travelling at 2 knots through the anchorage!  So we shouted to get their attention, but it still took a few moments for the penny to drop and the crew to jump into action.   It was nerve wracking entertainment for us live-aboards as the light started to fade and a windy night followed.

Music boomed out from enormous speakers set up on a stage at the dock most nights, vibrating the rigging more than the 20+ knot winds and drowning out the rumbling thunder. One afternoon the Carnival came out to us as the beauty queens were treated to a boat parade chaperoned by some very smart Colombian cadets.  Many local boats joined them for a whiz around the bay and a water throwing competition, we had wondered what they had been doing earlier filling up plastic bags with sea water. 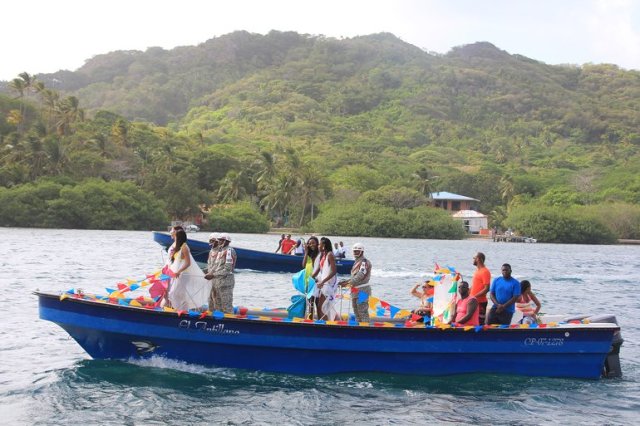 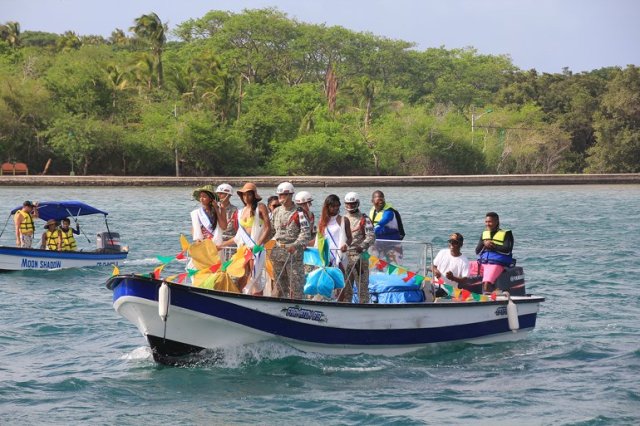 Paul, Becky and Joshua joined the parade in ‘Moon Shadow’ 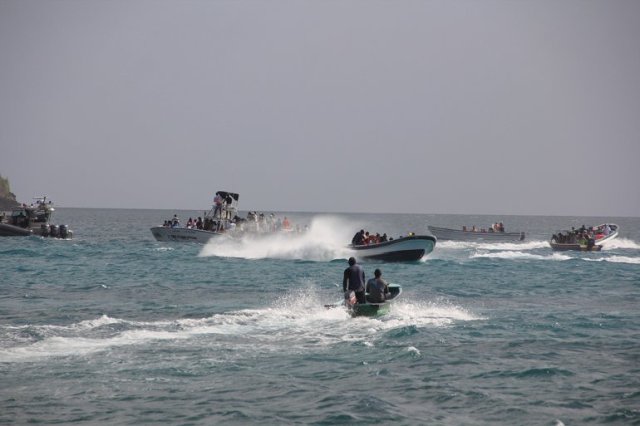 Last day of Carnival coincided with Jez’s birthday, a group of us took our dinghies to South West beach, about 3 miles around the coast but inside the outer reef, to a beach party which included horse racing.  As we arrived there was a large pirogue fishing boat roaring around the bay close to the beach. The driver turned sharply showing off, hit his own wake and was catapulted like a rag doll out of the boat into the water. It was a few seconds before he appeared at the surface rather dazed and was hauled back in by his co-pilot. No doubt is was more than just his ego that was bruised, it looked as though he hit the centre console as he went overboard.  On the beach there were many vendors selling traditional foods, cooked in huge pots over wood fires, and a great atmosphere with lots of people and of course music. There were three horse races, with just two horses in each,  thundering along the beach in amongst the brave spectators.  Then came the coconut tree climb, two fearless contenders raced up the trees bare-footed, the winner reaching the top before the other had got half way. Someone had been practicing.   We waited a long time for the greasy pig race before giving up (where eager catchers run around trying to catch a pre-greased pig I think) as unfortunately shade was difficult to find with the volume of people there and Jez had not applied sun cream and was looking rather red. So Monsieur le Tomate and I decided to head back alongside Ted and Barbara.  As we had hauled the dinghies up on to the beach to avoid the horse race, we were helped back into the water by some rather over enthusiastic helpers and as we started to float, more and more wet kids pulled themselves up into the dinghy to dive off before climbing back in again for another go. Jez waded us into deeper water in the hope that it would make it more difficult for them to climb back in, at one point we must have had a dozen soggy cling-ons, and I pushed the last one off over the side.  Now we had a dinghy full of sand and sea, but as I glanced back at the shore I could see Ted and Barbara getting the same attention as they rowed out into deeper water. 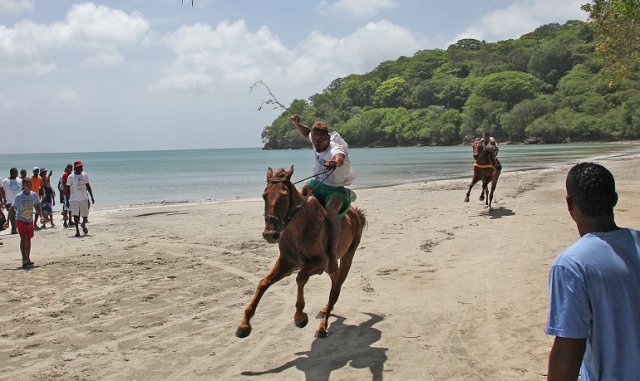 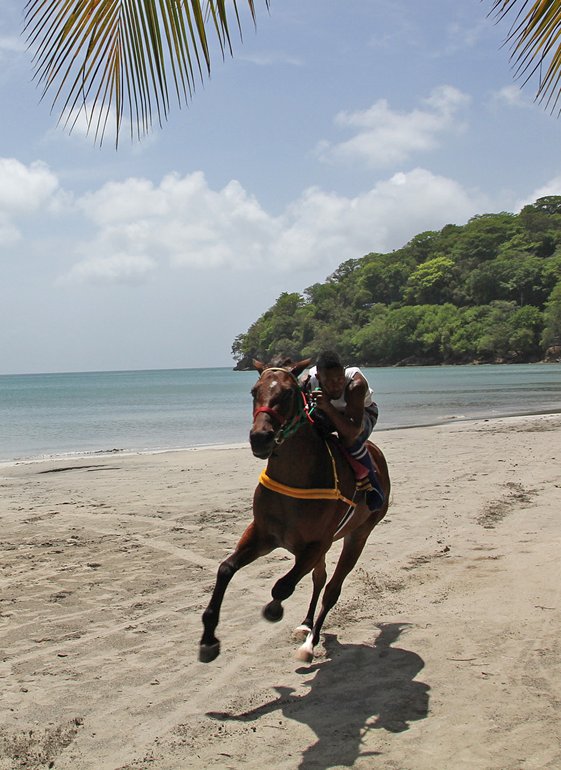 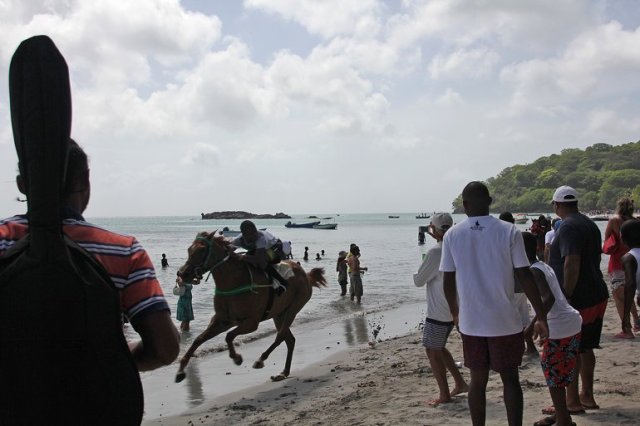 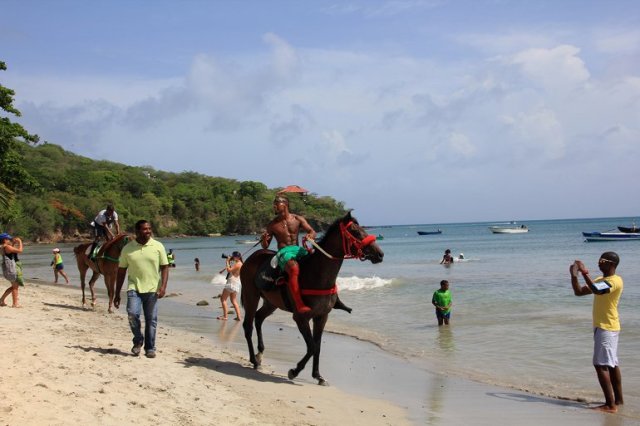 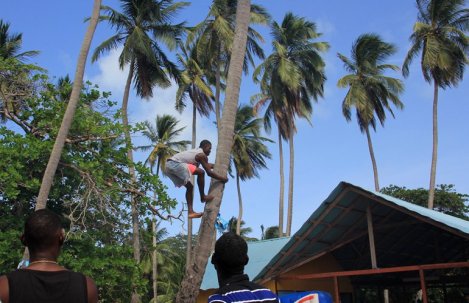 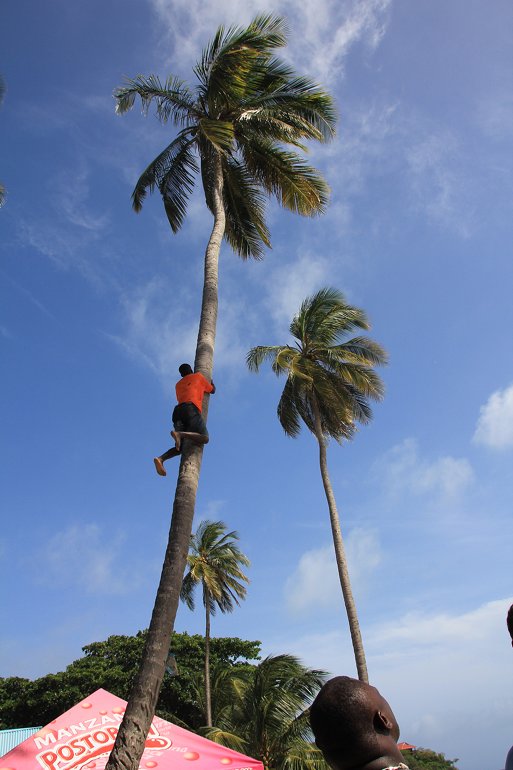 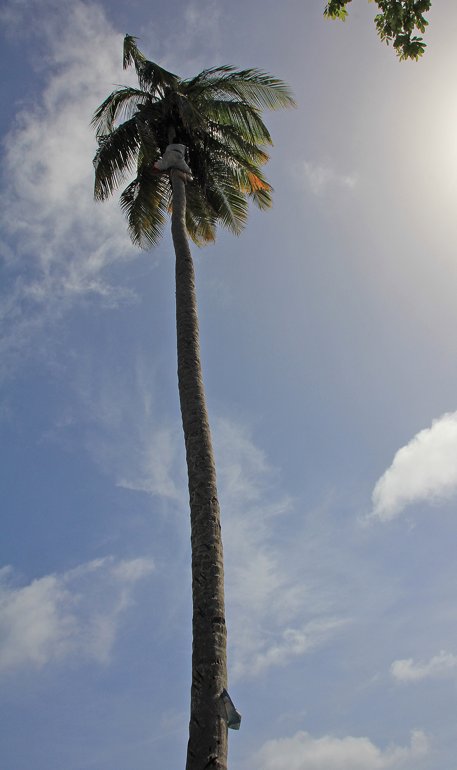 The winner, just visible, reaches the top and sends down a coconut! 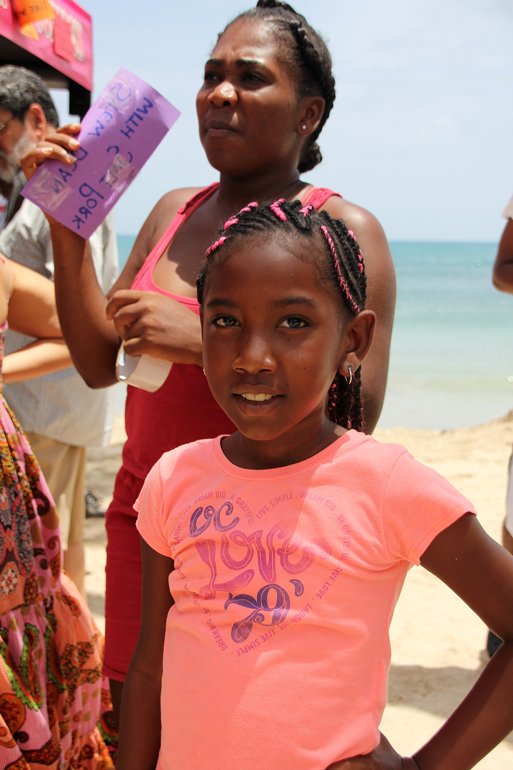 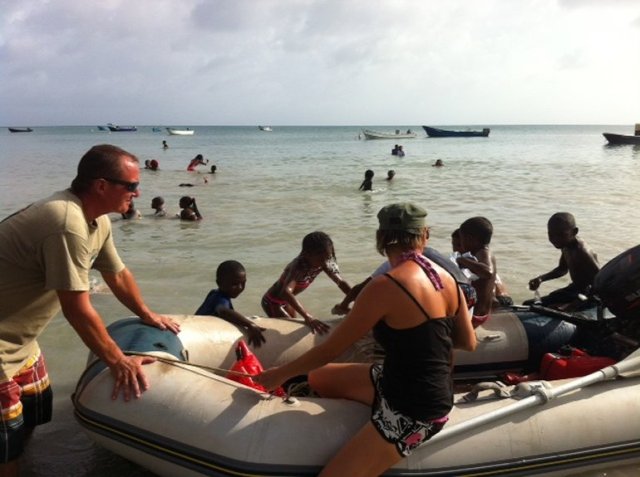 The last event of Carnival was being held at the stadium on the other side of the bay, but with a few hours of beauty queen admiring, judging and crowning before the concert we opted instead for a delicious pizza in town with Ted and Barbara and so ended the day content with full tums. Now the town has returned to peace and quiet and the anchorage is once  again calm.

We had an interesting discovery this week in one of our sea water strainers in the engine room, a tiny fairy basslet fish was tricky to remove without harm but our soup ladle came up trumps and he was safely returned to the sea. 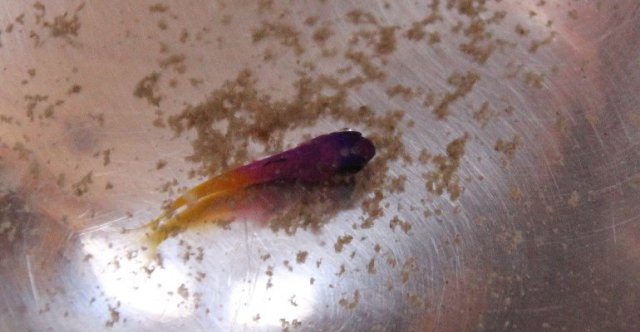 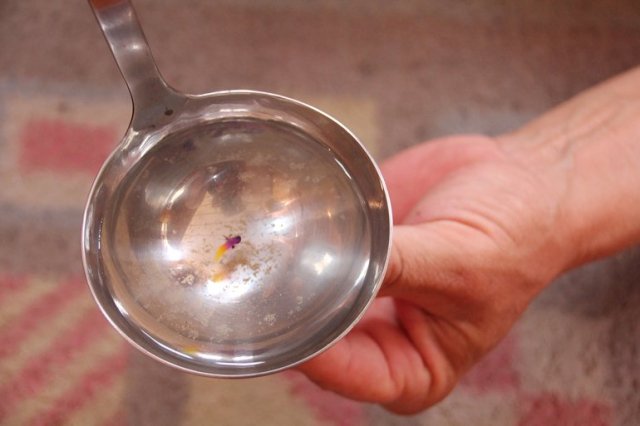