Having a Whale of a Time in B.C.

We rounded Cape Caution, under motor of course, in an almost flat calm sea. The area is notorious for heaping seas and accelerated wind but we saw none of that, perfect for whale spotting infact as several humpbacks were fin slapping and one even tail slapped right by the boat. And we caught and kept our first salmon, thanks to the new fishing net! 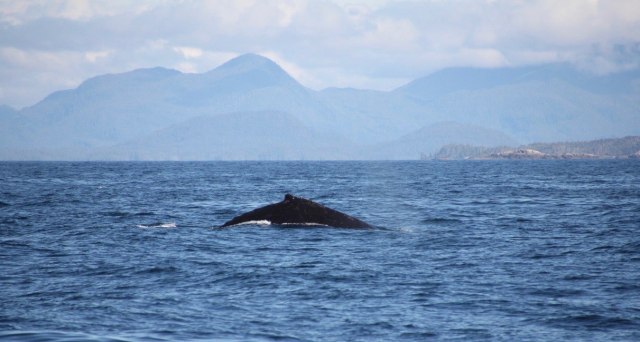 A salmon at last!

Our first anchorage in the Queen Charlotte Strait was chosen as it sounded like a challenge and would probably therefore be deserted, we were right.  We picked our way through a narrow kelp-strewn channel surrounded by low rocks and entered the Murray Labyrinth anchorage.  Not as outstandingly beautiful as most of the anchorages further north, we have been particularly spoilt, but protected and quiet.  We decided to set our crab pot just outside the channel in deeper water and fought our way through the kelp in the dinghy to find a good spot.  The following morning we had 21 Redrock Crabs stumbling over each other inside the trap.  17 went back as they were undersize, but four good size crabs went into the pot adding three meals for two to the stocks.  We have eaten rather well on this trip, crab has been our main diet since leaving Prince Rupert and of course now we have delicious salmon.

After a couple more anchorages we crossed over to Vancouver Island to visit Port McNeil to reprovision and fill up on diesel.  To give you an idea of how much we have motored since arriving in BC, we are using as much fuel in two weeks as we would normally do in a year.  Ouch!  Port McNeil was an excellent stop, after re-fuelling the attendant offered us space on the dock free of charge to go to the grocery store, he also filled up our cooking gas bottle on the spot.  What excellent service, so we took up the offer before heading off the dock to anchor for the night.

What do you do when your helicopter breaks down? Get a tow of course!

With a southerly gale forecast in a couple of days time we set off into the 68 mile-long Johnstone Strait to get down to Seymour Narrows while we could, several whale watching tour boats whizzed past us as we headed out of Port McNeil.  Sure enough it wasn’t long before we spotted a group of Orca’s feeding just south of Hanson Island.  This was our first good sighting of Orca’s, having only seen a glimpse of 3 fins in Alaska, now we were treated to several spy hops. 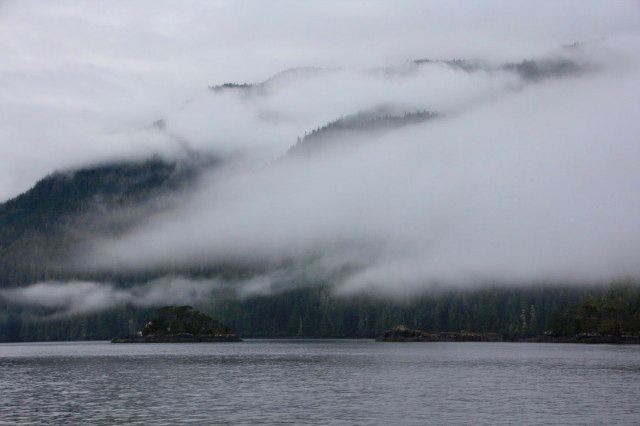 Fog rolls in over Johnstone Strait 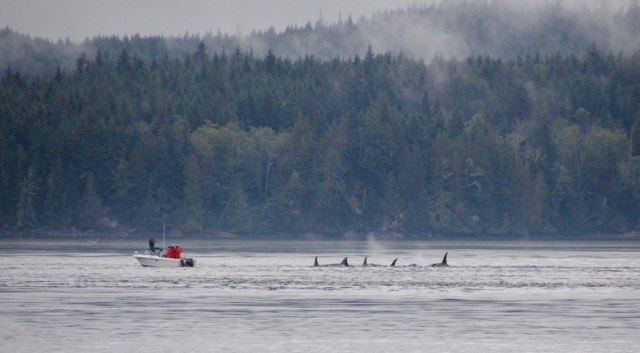 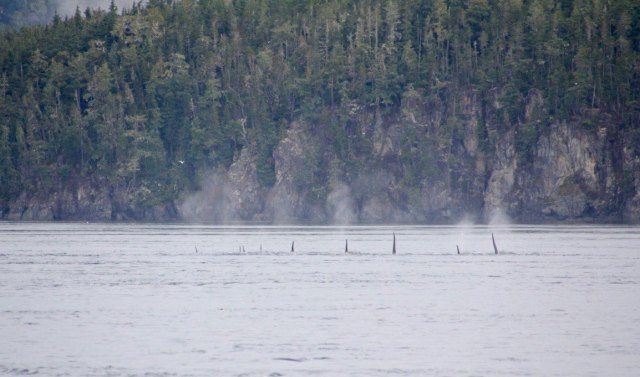 We chose a great hidey-hole to shelter from the gale, Small Inlet is just north of Seymour Narrows, and it seemed a good place to wait for more favourable conditions. Shortly after setting the crab pot for the night the heavens opened, and it rained continuously for nearly 48 hours.  With 30+ knots blowing outside we hardly felt a breath of wind in the protected anchorage. An excellent spot made even better by the large Dungeness crab in our pot when we finally retrieved it two days later.

Almost as big as the chopping board

Currents through The Seymour Narrows can run at up to 16 knots on a large tide, so timing a passage at slack water through this stretch is vital, it was reassuring to see a motor boat and tug and tow gathering ahead of us waiting to get through.  Despite being slack water we did experience some turbulent swirling water taking Joy off course at times, but we got through without trouble and then the wind suddenly appeared from the north west and we set sail for the first time in ages. It was glorious to glide down Discovery Passage, past the Campbell River and into the Strait of Georgia under sail.

Looking back at Seymour Narrows

Passing a huge log boom being towed by a Tug 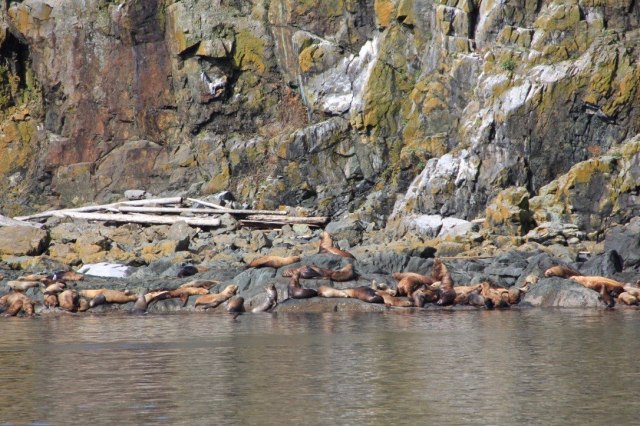 Lots of sea lions basking on the small island of Mitlenatch 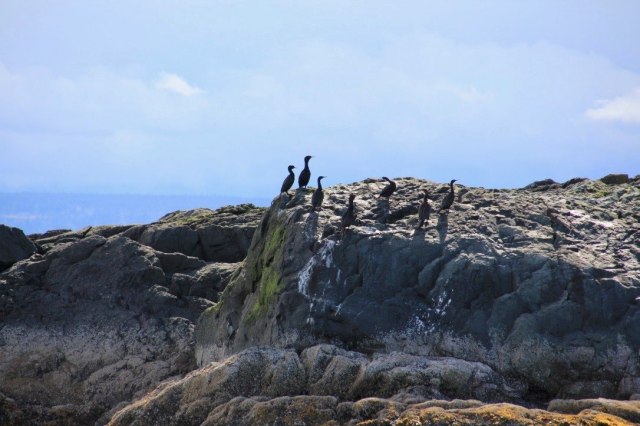 At last, a photo with some blueish sky, oh and some cormorants

We headed to Desolation Sound for a few days hoping for some better weather and weren’t disappointed.  That shiny bright thing finally appeared in the sky, it felt as if we hadn’t seen it for weeks. Desolation Sound is a popular national park about 80 miles north of Vancouver and it’s very beautiful with steep rocky cliffs and snow-capped mountains in the background. Luckily for us it wasn’t very busy as it’s just out of season,  so we visited a couple of the most popular spots.  Teakern Arm with its impressive waterfall has very deep water right up close to the rocky cliffs so we dropped our anchor and backed up to the cliffs.  I took an aft line ashore in the dinghy and attached it to an iron hoop embedded in the rock. It was so nice and peaceful here we stayed a couple of days, and walked the trail to the lake taking a picnic with us.  It wasn’t quite what we were expecting, when we arrived at the top of the waterfall we found that we had to  actually cross it to continue the trail. So we carefully waded through the rushing cold water, then just when we thought we were back on track we came across a second slightly gentler but deeper body of water to wade through then some rock climbing and more wading before reaching a small opening above a steep rocky shelf with a view of the lake. We met another couple who, after a chat about sailing, said they were wanting to take a bath in the lake despite the cold water as they didn’t have a shower on board! So not wanting to invade their privacy we reversed the route and went back and ate our picnic in the comfort of our cockpit.

The waterfall at Teakern Arm 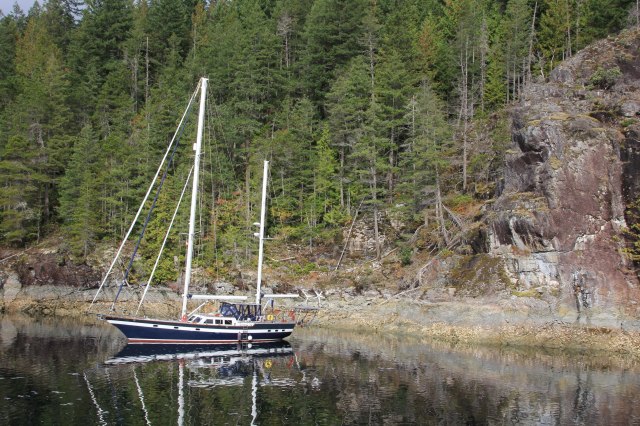 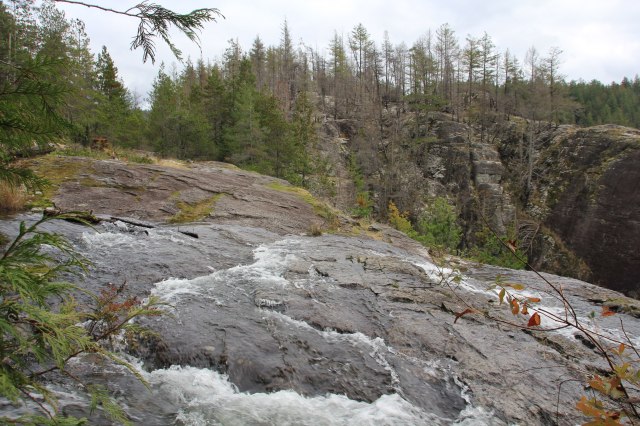 Crossing the waterfall at the top 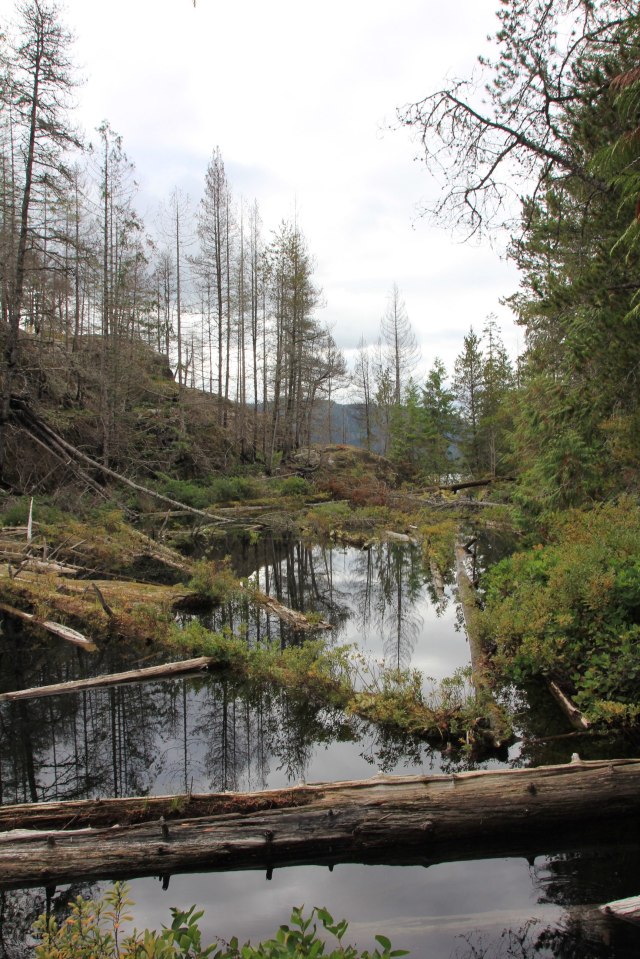 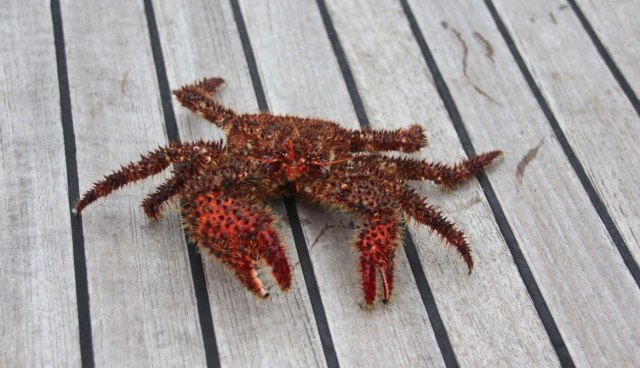 Then on to Prideaux Haven where we were the only boat in a small pretty inlet called Melanie Cove, this had a great hike over the hill to another small cove further north although it was more like an assault course with so many trees fallen, but it was worth it for the exercise and the view across Laura Cove at the end.

At anchor in Melanie Cove 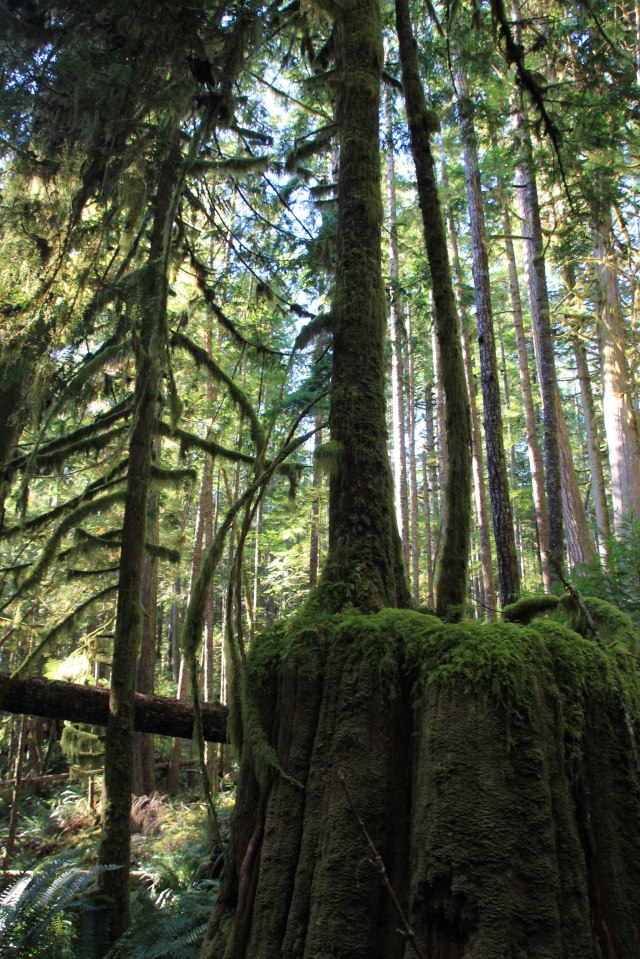 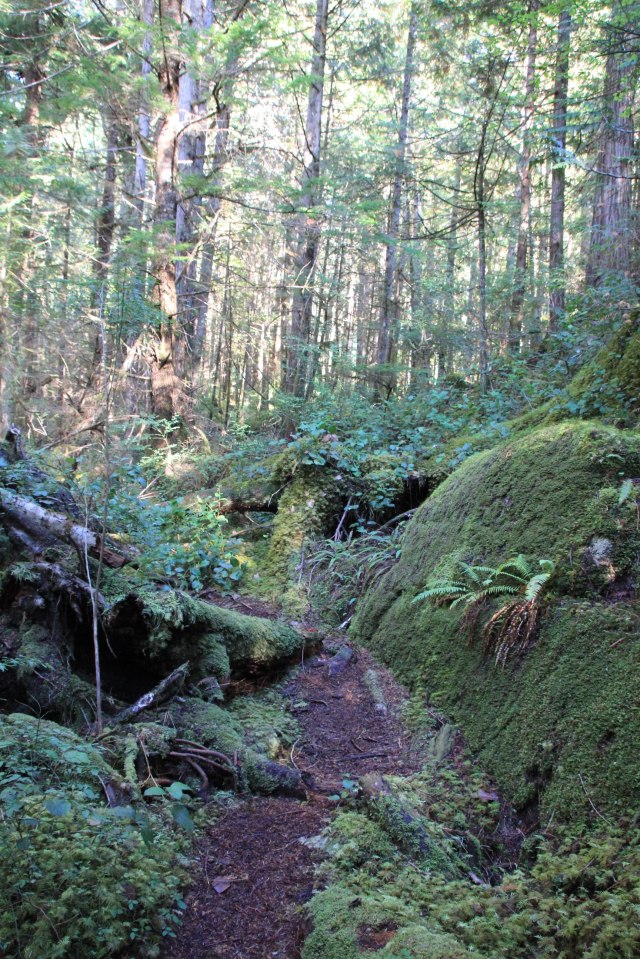 Looking out across Laura Cove soaking up the sun

With a good forecast for a few days we took the opportunity to get down to Vancouver City, our alternator (new in Trinidad) had packed up and we needed to get this seen to, plus my Mum was paying another visit to help celebrate my birthday.  Vancouver City has an excellent waterway called False Creek (named so as it is actually a dead-end) where visiting boaters can anchor in the heart of the city with a free permit obtained online.  It was pretty surreal entering into False Creek underneath two bridges and be surrounded by high-rise buildings and thousands of people, especially after the last few months of remoteness. 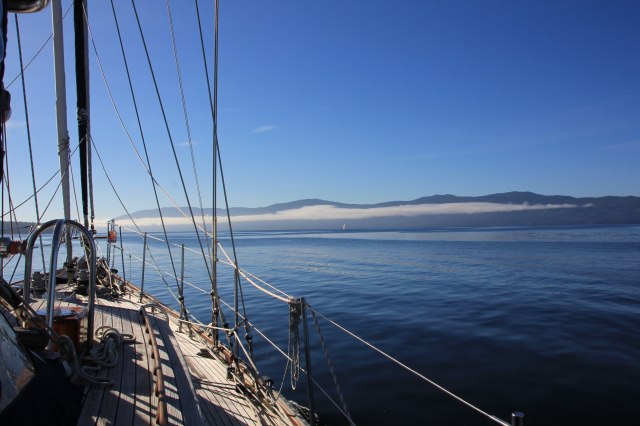 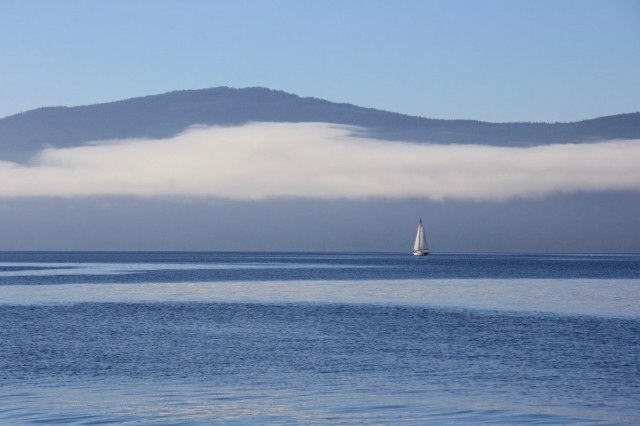 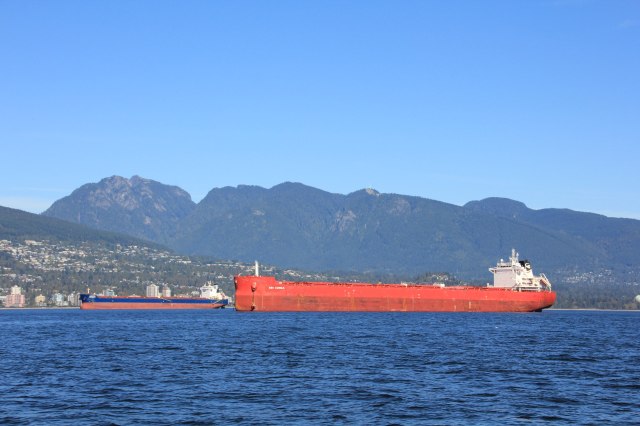 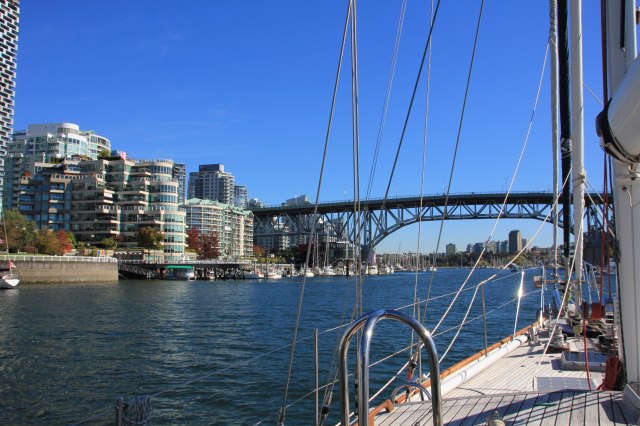 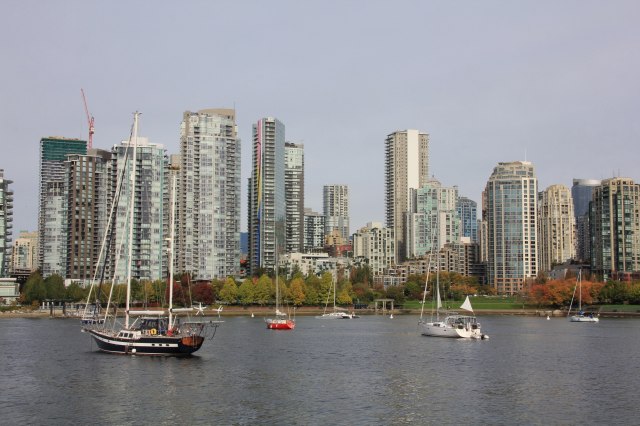 It proved to be such a memorable stop, we are definitely not city people but this place we fell in love with.  Lots of parks and open spaces, and walkways as big as traffic lanes so its easy and enjoyable to walk just about anywhere.  We rushed our alternator in to the repair shop as it was late in the day Friday when we arrived, and it was fixed Saturday morning.  It made a refreshing change to get such an efficient service, and it has been one of the few things we have had repaired that actually works, and works better than it did before (touch wood).

Vancouver City is also a great place to have guests, we were a 2 minute walk from the Skytrain which connects with the airport so we could easily go and meet my Mum off the plane.  We visited the famous Granville Market, a fantastic vibrant and busy indoor market with just about any kind of deli food, cakes, crafts and fresh produce you can imagine. 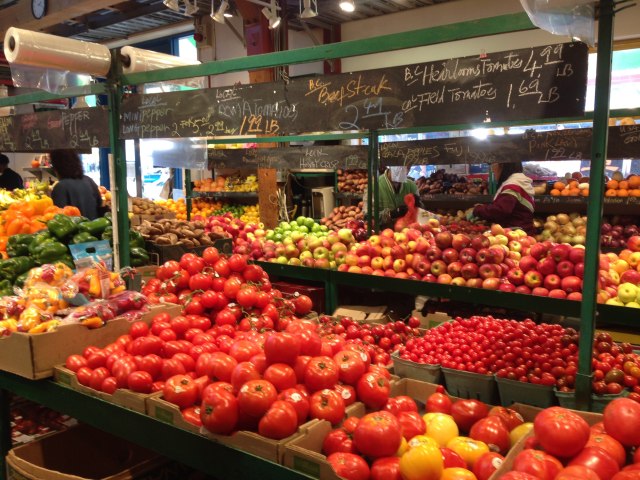 A colourful stall at Granville Market 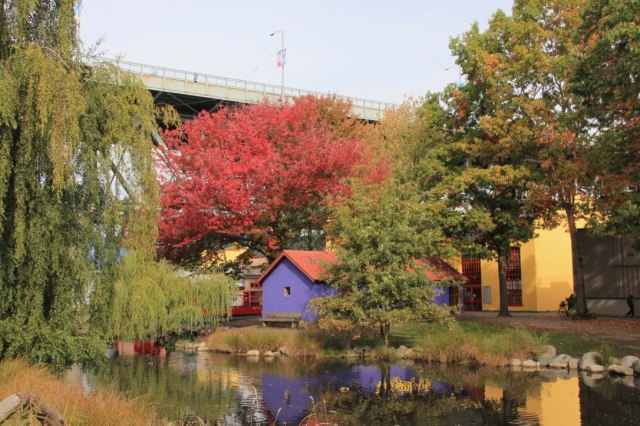 Even the silos and lorries are colourful 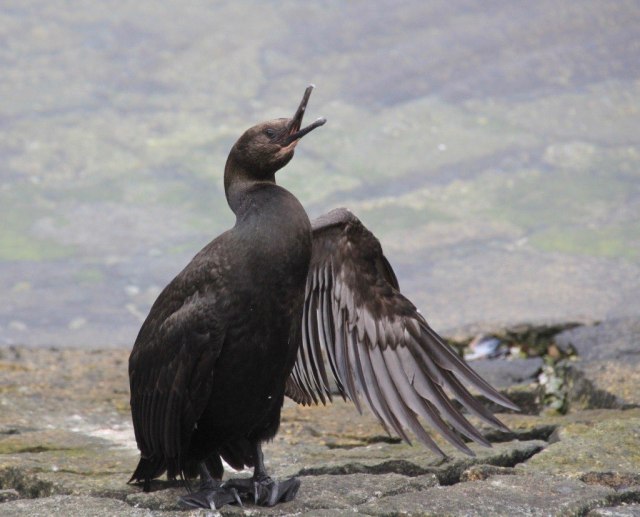 We then spent a wonderful few days in Howe Sound just a few miles north of the city, with  some great hikes through the forests and a night at Snug Cove on Bowen Island to go out to dinner for my birthday. I chose a wonderful Italian restaurant called Tuscany, fine dining with an Italian twist, all our meals were plate-lickingly superb.

Peaking out across Howe Sound from the peak on Bowen Island 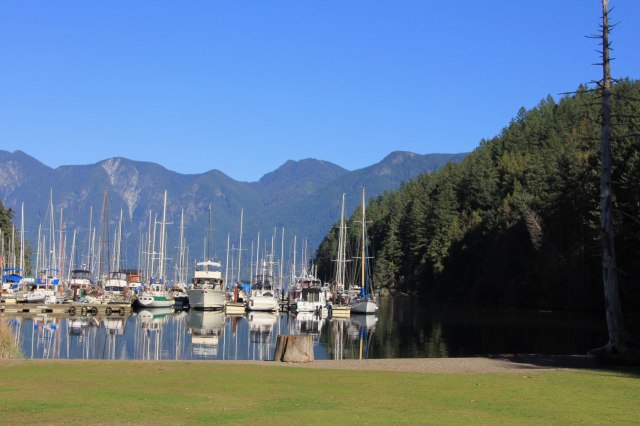 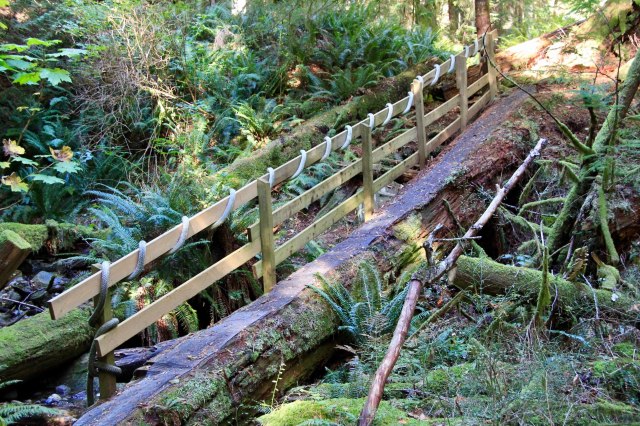 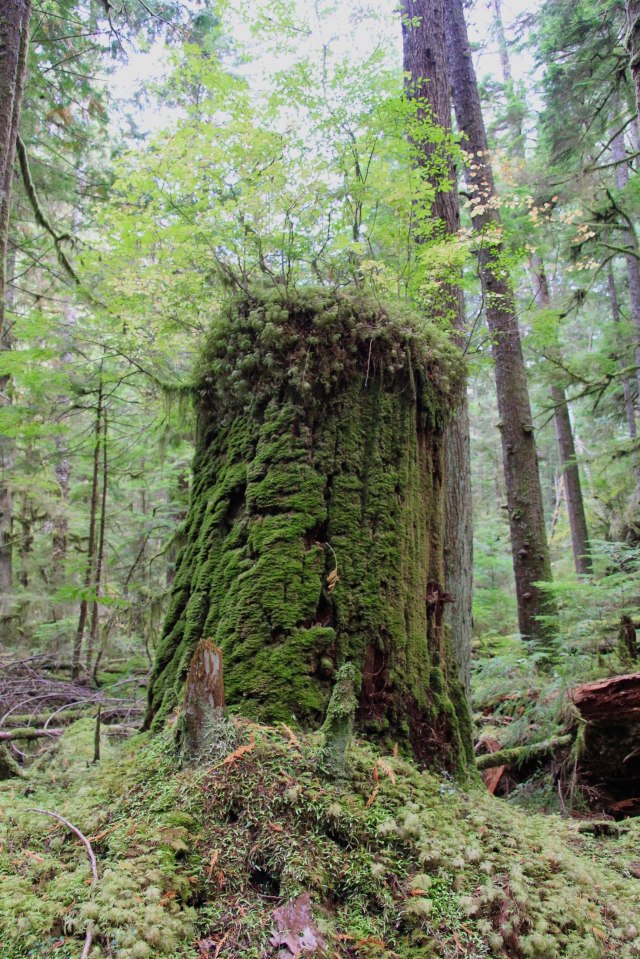 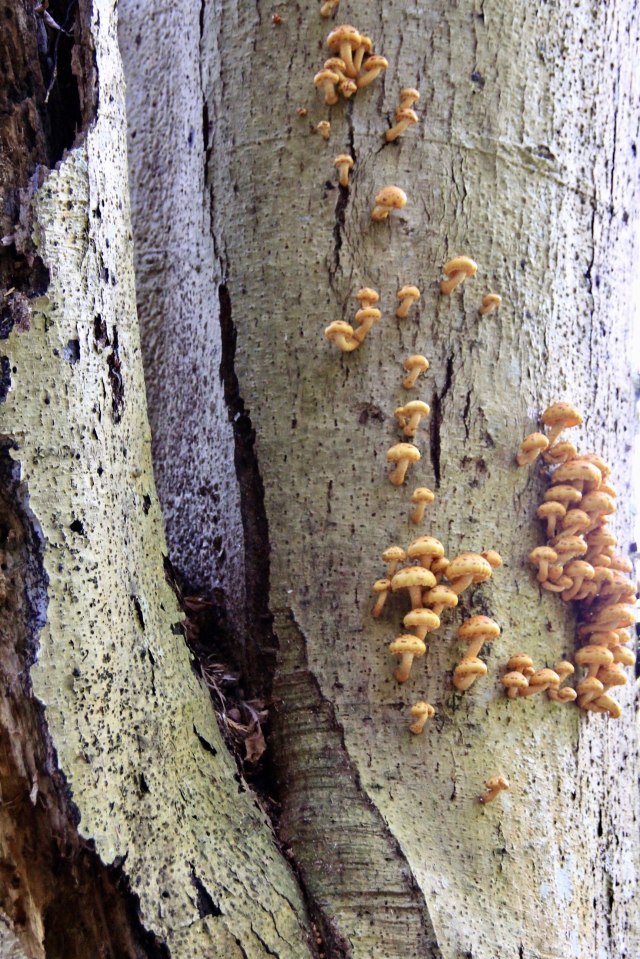 Back in the City we took a walk to Stanley Park and followed the Lost Lagoon trail, it’s amazing to have this wonderful park with so much wildlife in such close proximity to the city.  The highlight of our late afternoon walk had to be the appearance of a family of raccoons who timidly came out of the undergrowth to get a closer look at us.  Then a brief sighting of a skunk, a little shyer than the raccoons, but another new experience for us.

Looking out at the anchored vessels in English Bay 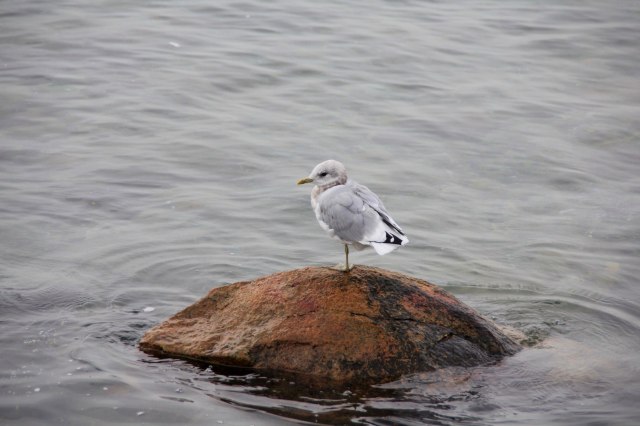 Mr and Mrs Wood Duck show off their beautiful markings, they look as if they have been painted with an artist’s brush 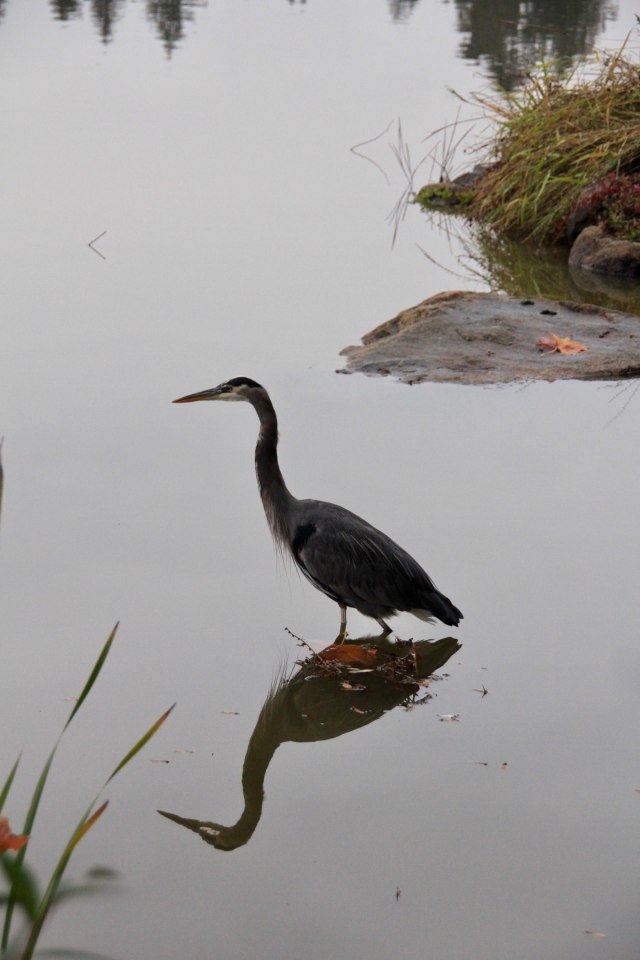 “What does a raccoon have to do to get some privacy around here?” 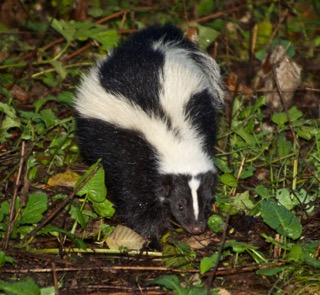 A skunk can spray a target 12 feet away so we didn’t get too close!

All in all Vancouver City is a fab place, we have thoroughly enjoyed our time here and I have had a truly memorable birthday week, as always we don’t feel quite ready to leave.  With our weather forecasts showing a steady succession of low pressure systems firing across the Pacific towards this coast in a weeks time, it is sadly time to say goodbye to Canada and head 800 miles south to San Francisco while we can.

3 Responses to Having a Whale of a Time in B.C.