It was great to be back ‘on the road’ again although it was sad leaving British Columbia behind, another one of those places we felt we weren’t quite ready to leave.  But as always the weather dictates our movements to a large degree (and it had got so cold we were eating our dinner with woolly hats on) so we headed off with a narrow weather window to get south, in search of some warmth.  After leaving Canada our first task was to check back in to the U.S., with the new ROAM app and an internet connection underway we plugged in our details requesting entry as we crossed the sea border.  Jez was then interviewed by a customs officer via the app on our iPad, weird but very convenient as we were then emailed our clearance confirmation.  After a cruise through the islands and an overnight stop at Roche Harbour, San Juan, we had an early start to get to Neah Bay to refuel by the end of the day.  Another great display of Orca’s racing through the Juan de Fuca Strait which separates Vancouver Island & the US mainland along with the odd Humpback blowing just added to our enjoyment, especially as we had plenty of wind to sail. Bliss. 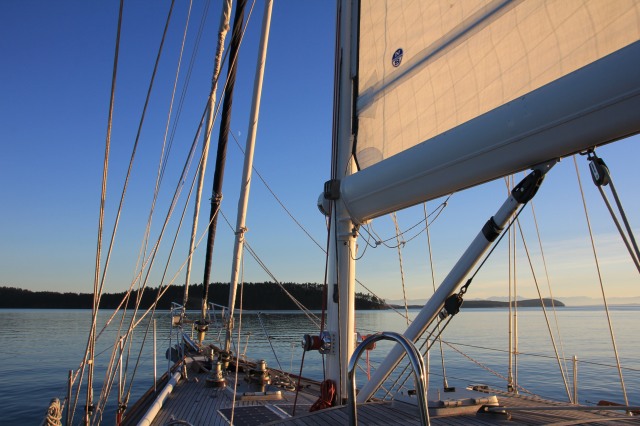 Back in US territory heading to San Juan Island 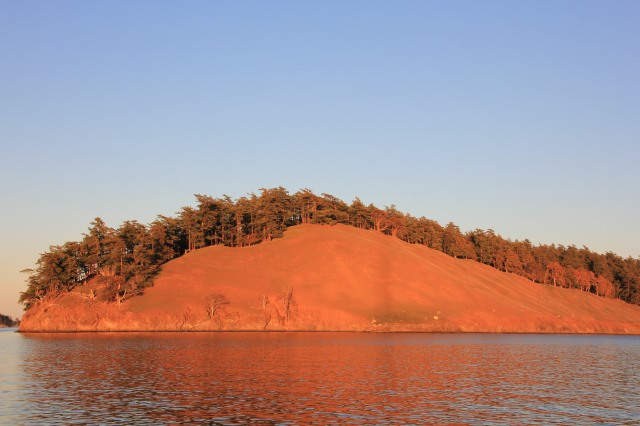 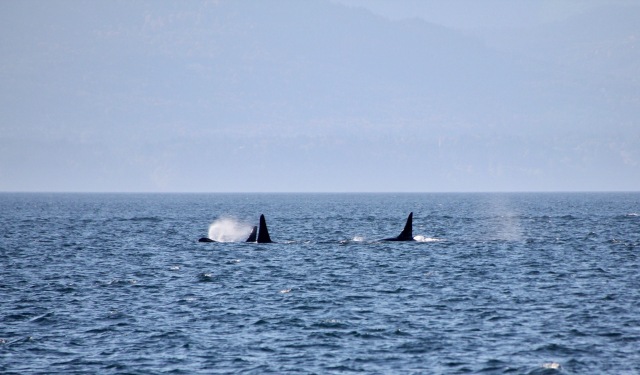 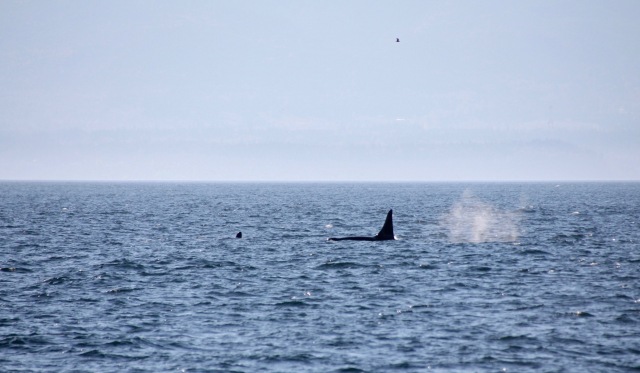 Despite having read that the fuel dock in Neah Bay was open 24/7, when we arrived and plonked ourselves on the dock no-one was about.  The lights were on but there was nobody home…  At the head of the dock we found out that they had gone for pizza, so we waited and waited.  It was just starting to get dark when a very apologetic attendant arrived with some bad news, her manager wouldn’t allow her to serve fuel after dark. With no other choice we anchored off for the night, knowing this was shaving 12 hours off of our already narrow weather window,  but as we had used quite a bit of fuel since Port McNeil (and it was only US$2.95 per US gallon including tax here) we didn’t really want to head off without it.

So full of fuel (we have a keel tank so this also acts as ballast) and a good nights sleep we headed off around Cape Flattery, where wind accelerated to a lively 30 knots in the blink of an eye.  Once clear of the Cape light winds returned and, gazing out across the beautiful blue Pacific with the sun shining and a flat calm sea,  we commented how difficult it was to imagine that conditions here can get rough.  After a blissful 48 hours we were reminded of the reality, with winds in the early 30’s gusting to 36 knots and an uncomfortable sea running Joy as always did her best and romped southwards. 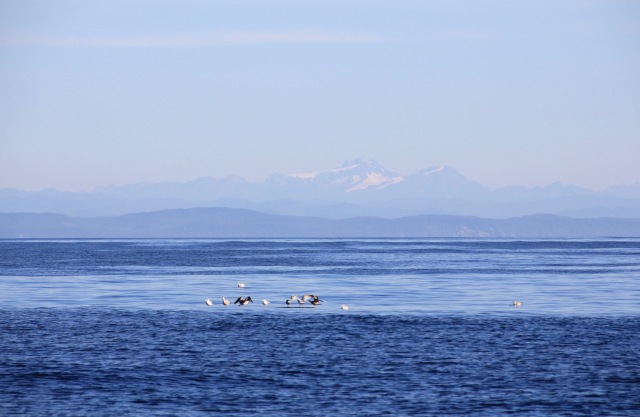 Luckily it only last for 24 hours and as things calmed down I could get back to dolphin watching in between reading (‘Erebus’ by Michael Palin, an absolutely excellent read about the history of the boat ‘Erebus’ and Sir John Franklin’s ill fated expedition of the North West Passage) and knitting (a nice woolly hat for Jez…well, I am half a century old after all and need to keep up the family tradition…thanks Mum for all the gear and refresher lesson!). The daily dolphin visits have been wonderful, the large ones ride the bow wave as the younger ones leap out to the sides, hearing their high pitched whistles gives you a sense of their excitement at having something to play with, and even better with an audience too. 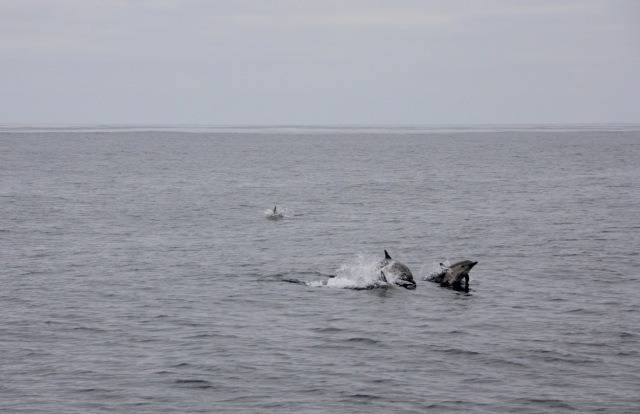 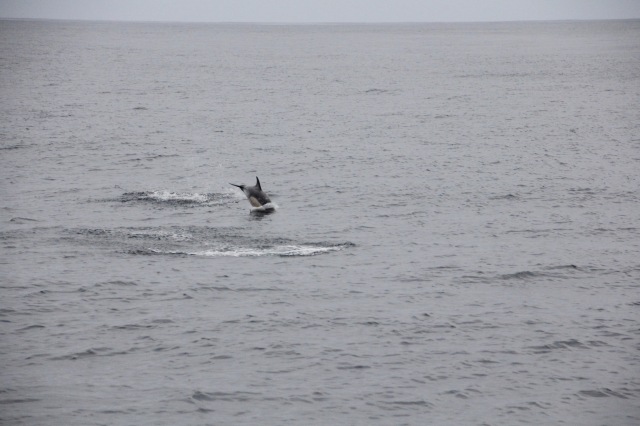 Another visitor to entertain me on the journey was Stanley, a hundred miles offshore was an odd place to have a starling come to stay.  With an offering of sunflower seeds and a bowl of water he was pretty content to ride it out for 24 hours, we were sad to see him go although it did mean we didn’t have to creep around the cockpit trying not to scare him.

Stanley the Starling – such beautiful markings on his feathers and wings

Our wind sadly died as we headed in towards San Francisco, the level of that cheap fuel we had just purchased got a little lower as we motored towards the iconic bridge, The Golden Gate, just as the sun rose.  Our timing was perfect as it was just about slack tide, we stayed out of the buoyed channel to keep clear of the commercial traffic and a large cruise ship going in. The Golden Gate Bridge certainly was beautiful in the early morning sun.

Our first port of call inside the huge and busy bay was the anchorage in Richardson Bay close to the pretty town of Sausalito (under the bridge and turn left) to see North Sails to make some long awaited adjustments to our new sails.

A marina resident in Sausalito

One of the rather stinky ferries leaving Sausalito for San Francisco

The anchorage is plagued by wake from the frequent ferries that arrive at Sausalito, making all the boats roll and buck every 20 minutes from very early morning to late at night, so when the sails were back in the loft we headed off to Clipper Cove at Treasure Island for some flat calm water to help retain some sanity. The Cove is nestled between Yerba Buena Island which supports the centre of the San Francisco to Oakland Bay Bridge and Treasure Island which has a lot of development going on. Doesn’t sound very appealing I know,  but ignoring the sound of diggers and the traffic noise from the bridge, the Cove has no ferry route going past it and that is a big plus in the bay. It was bliss not to be thrown from one side of the boat to the other while trying to hold down everything that comes back out whilst at anchor, like tools, computers and the sewing machine, and the sight of the beautiful bridge at night all lit up is wonderful.  A free anchoring permit is required at Clipper Cove for up to 96 hours but its easy to apply just by leaving a telephone message.

Fog is a common hazard in the SF bay

It was wonderful to see so many people actually using their boats!

Alcatraz Island with the city behind 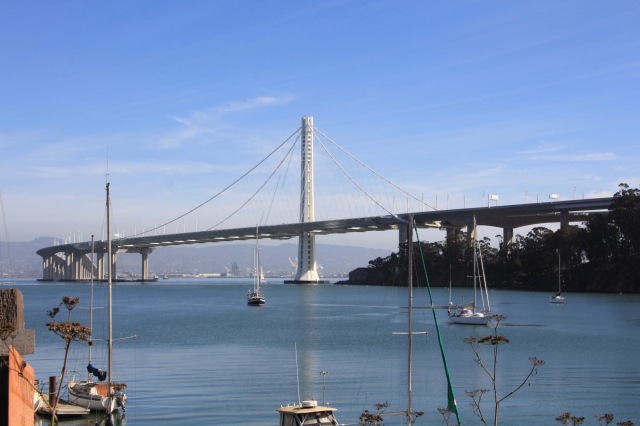 This was also a convenient place to beach the dinghy and catch a bus into the city to explore.  We have returned to this Cove three times now in between sail adjustments, giving us the chance to see San Francisco city and experience the very busy Pier 39 and its resident sea lions. The sea lions started to arrive on ‘K’ dock in the marina at Pier 39 shortly after an earthquake hit San Francisco in October 1989.  Within a few months the number had grown to 300, and hit an all-time record of 1700 in 2009. Nobody knows why they just suddenly turned up, but the marina decided to allow them to stay (I don’t think they had much choice!) and now they have dedicated floating pontoons all to themselves. We watched the them for ages, on some pontoons they were laying two deep.  The sound of them barking (and the smell) filled the air as hoards of tourists watched on. 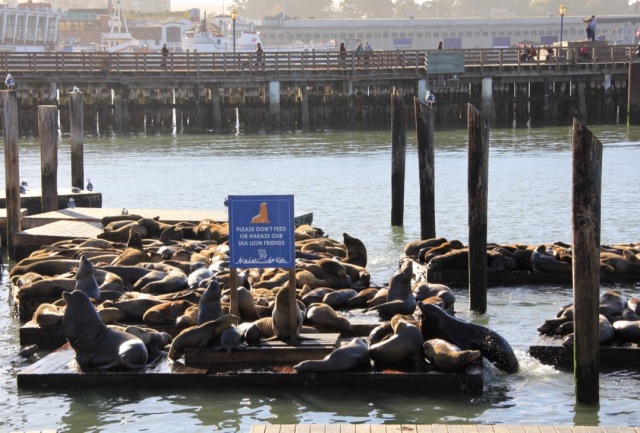 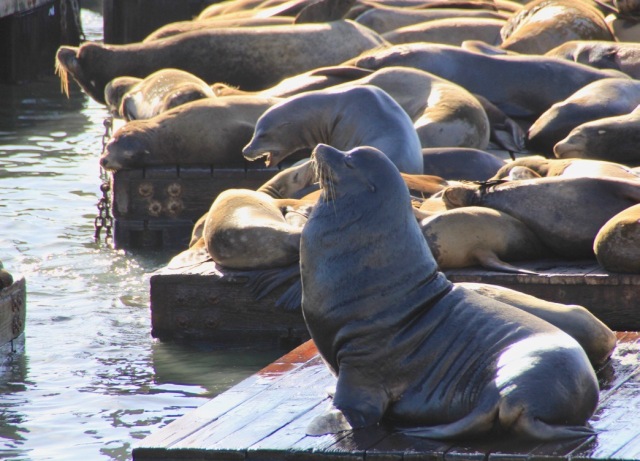 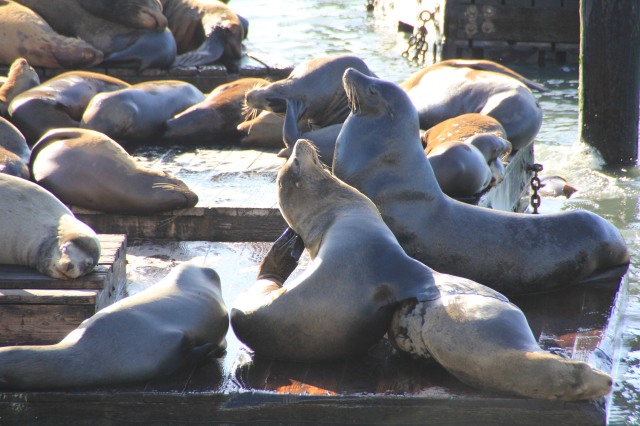 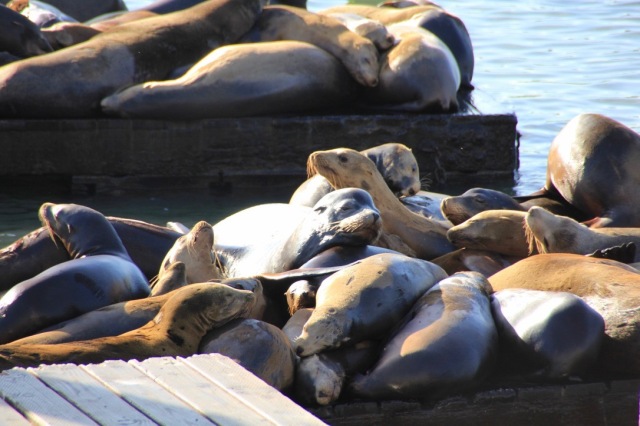 We took a long stroll along The Embarcadero which runs along the waterfront on the eastern side of the city, bustling with people walking, cycling, skateboarding and scootering, all enjoying the sunny Sunday afternoon. There were lots of street entertainers too, among them a female ‘rap artist’ rapping from inside a play pen with a loud sound system and a small boy playing with his collection of toys! 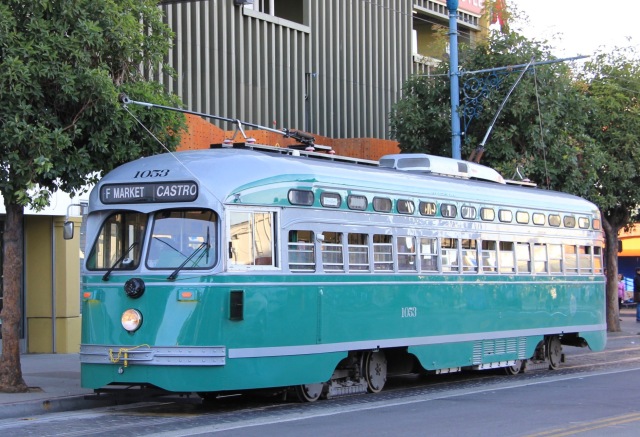 The western section of the SF to Oakland Bay Bridge (from Yerba Buena Island to the city) is an impressive double-decker with eastbound traffic on the top layer and westbound on the bottom. It carries 260,000 vehicles a day!

Anchored back in Sausalito for some more sail adjustments, we had a nasty east wind blowing 30 knots and strong currents with a new moon, making conditions pretty uncomfortable for a few hours last Thursday, it even sank a boat in the harbour.  This strong east wind and very dry hot weather (we have not had rain since we arrived) caused a devastating wild fire in Butte County, 160 miles to our north east, and by the afternoon we had a cloud of smoke cover the bay which has remained ever since. Today, Sunday, the fire has now destroyed 109,000 acres and is only 25% contained with 23 reported deaths and over 6,500 structures burned.  The bay area remains hidden in a cloud of smoke.

The smoke arrives at Richardson Bay

A beautiful sun rise peeks out from the smokey haze

Like Loading...
This entry was posted in California and tagged pier 39, San Francisco, sea lions. Bookmark the permalink.