Our passage from the atoll of Fakarava to Tahiti was bouncy and wet with a very confused sea caused by the meeting of two swells. A long south-west swell of 2.5 metres crossing with a short south-easterly caused by the prevailing wind, not an ideal combination.  We knew it would be uncomfortable but that never really makes it any easier. We were heading for the protection of Tahiti’s western reef before the conditions were forecast to worsen, and thankfully the sea eased as we rounded the southern end of Tahiti in the darkness of late evening on day two.  Sailing a little more comfortably towards the main channel in through the reef we looked longingly for the leading lights shown on our charts.  The southern side of the channel had a lit beacon marking the reef, but as we approached in the pitch black there were no leading lights to be seen.  The pass is wide and deep and reported to be safe in all conditions so we decided to cautiously approach, as the chart and visual bearing on the lit beacon all agreed we made the entrance whilst keeping a close eye on our forward looking depth sounder.  The sound of the sea crashing on the reef either side of us in the dark was a little eery, but we sailed through without any problems and headed south to a small anchorage just off the channel.

Our intended destination on Tahiti was Port Phaeton, a large bay that lies on the west side of the isthmus that connects ‘big’ Tahiti Nui with ‘little’ Tahiti Iti. So after a great nights sleep we negotiated the network of channels around the inner reefs and shoals, and we were rather glad we hadn’t attempted this in the dark as there were many fishing buoys dotted about just waiting for an unsuspecting propeller.  Port Phaeton is a very pretty bay surrounded by lush green countryside, but only a five minute walk to the small but busy town of Taravao on the isthmus. The protection in this bay was complete, as we watched the sea build outside to an impressive 5 metre swell and crash onto the reef, Joy sat peacefully suspended in a mill pond.  As the wind reportedly blew 30-40 knots gusting nearly 50 outside, we had barely a puff of wind cross the boat and our wind turbines sat idle.  It seemed to rain for days and days, with low grey clouds looming over us I had almost forgotten what that bright shiny thing in the sky looked like. Jeans, fleeces and the winter duvet even came out of storage. With no wind or sun to generate our power, we had to run the generator to charge the batteries for the first time in ages. But, we were safe and snug in quite possibly the best protected bay in the whole of French Polynesia. It deserves its reputation as a hurricane-hole. 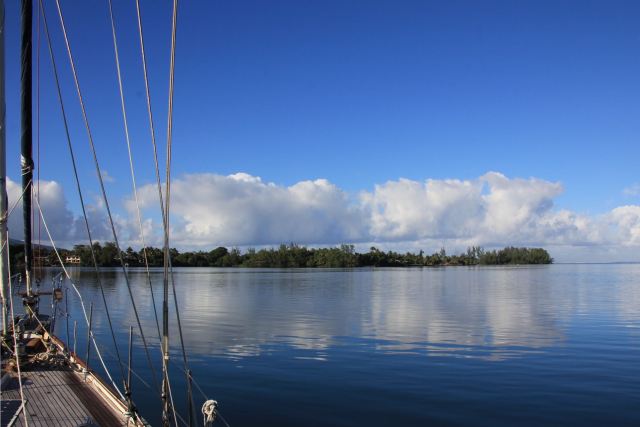 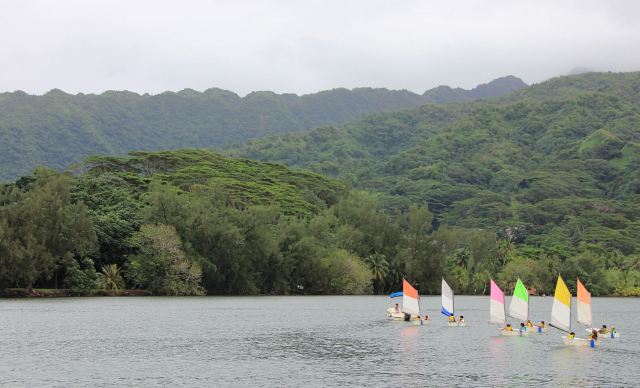 Youngsters get regular sailing lessons in the bay whatever the weather

The town of Taravao kept us occupied on the gloomy days, the roads have several stands selling fresh fruit and veggies of an excellent standard and that made a nice change from having to hunt and forage for produce. But with so many shops including a large Carrefour with lots of tempting tasty French goodies, it also relieved us of some cash.  One day, crossing a road in town by the Church I noticed the pavement was white. Looking up at the pine-like tree overhanging the pavement I was amazed to see it full of nesting Black Noddys!  Further along the road in the middle of a busy junction, with traffic passing on all sides, we came across another tree also full of nesting Noddys.

The Black Noddy chick is fed by both parents and gains weight rapidly, by the age of 3 weeks it can weigh as much as the parents! 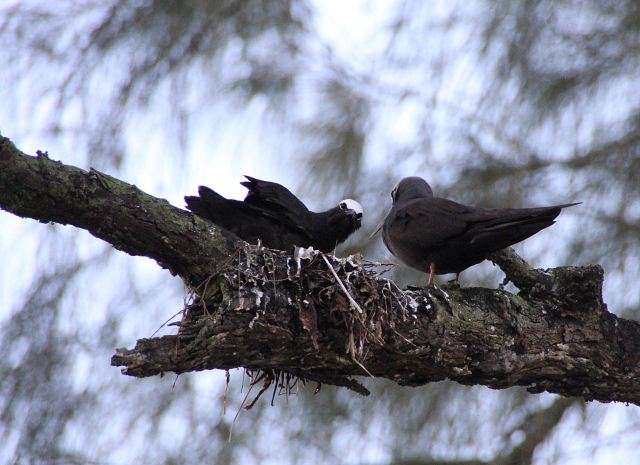 There are two schools of thought on the name “Noddy”. The first is because it nods and bows during courtship, the second is that sailors once called them ‘noddies’ meaning ‘simpletons’ as these birds are so tame that they can easily be taken from the nest (to eat)! I didn’t test this theory as we had already decided to try some local beef for supper!

We rented a small car from the local garage so that we could explore the island and also visit Papeete, the main city at the north end. Tahiti Nui has one main road that runs around the flat perimeter of the island, a busy road constantly streaming with fast traffic, well it seems fast after being used to an average of 6 knots.  On the inside of the main road lies some beautiful dramatic countryside, mountains covered with a variety of trees of all shapes, sizes and shades of green. The mountain peaks disappear into the thick veil of cloud hanging over the island, and the valleys have numerous waterfalls flowing, especially with all the rain.

The east coast of Tahiti Nui after the weather had improved 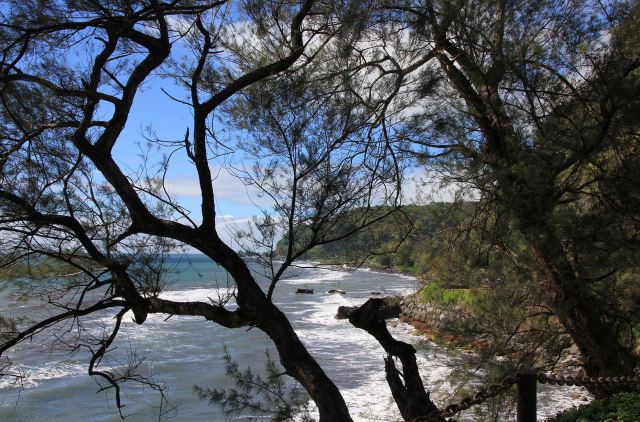 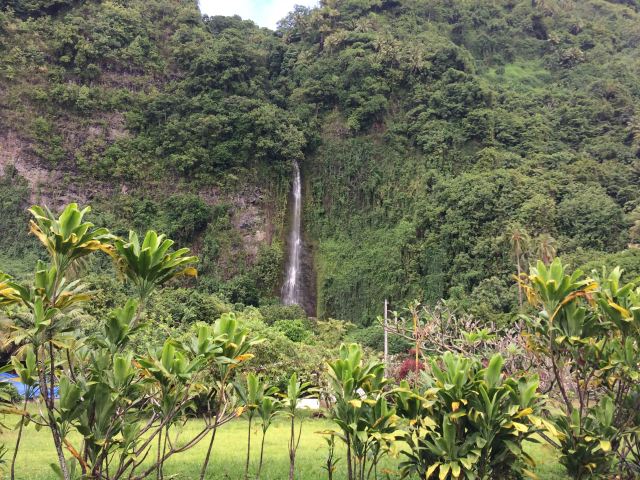 Once on the road, it was difficult to stop or get off as the traffic just kept pushing us on.  Jez remarked that Big Tahiti is basically like a race track with an inaccessible park in the middle – this really summed it up for us. Papeete is a busy city, jam packed with traffic and people, we found a lot of road works and building renovations underway, the place certainly needs it.

Tahiti-Iti is thankfully very different,  the hills lie much lower than the northern half and with fewer people and more open countryside the road is less busy.   We managed to find a small winding lane that took us inland through rolling fields dotted with cattle munching on the lush green grass.  We felt much more at home here. At the top of the hill we could look out across the isthmus and Port Phaeton towards Tahiti Nui with an excellent view of the reef responsible for our protection from the swell. 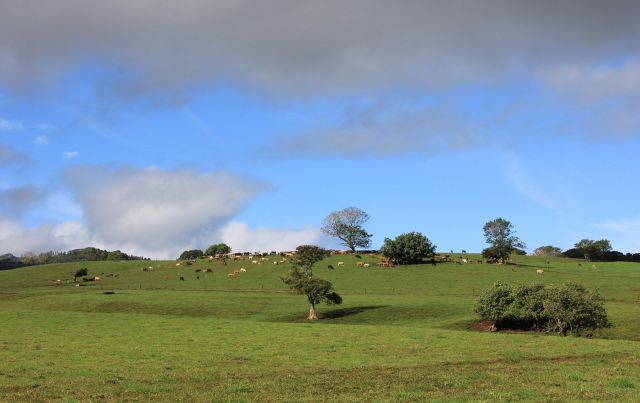 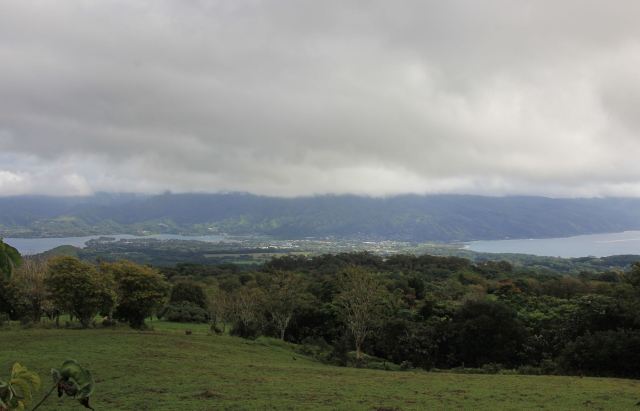 Tahiti Nui visible under the clouds, Port Phaeton lies to the west of the low isthmus 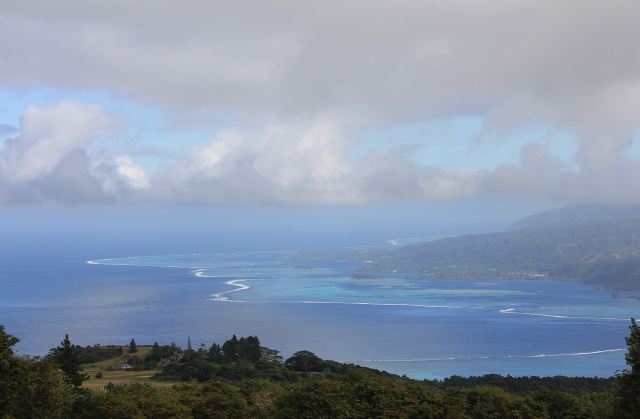 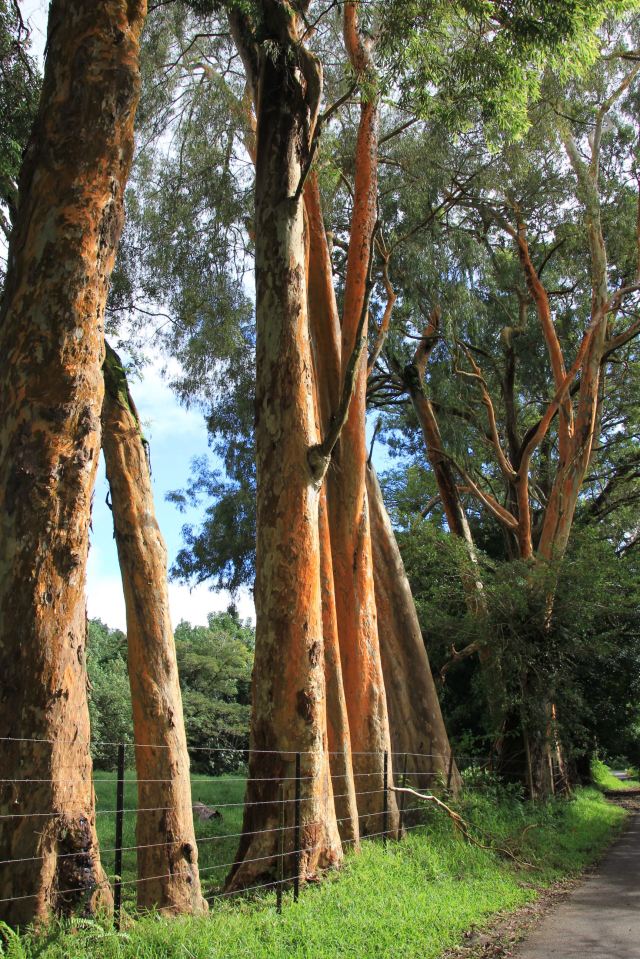 As soon as the weather improved it was time to move on, our next stop in the Society Islands group is Moorea just a few miles off the northern coast of Tahiti Nui. 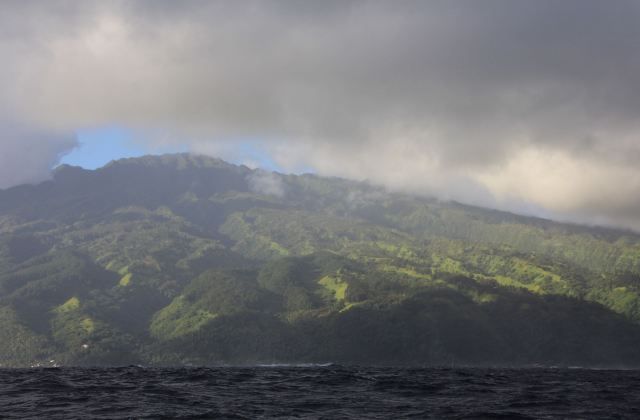 Like Loading...
This entry was posted in French Polynesia and tagged Port Phaeton, Tahiti. Bookmark the permalink.